Posted in: No Huddle by Brent Lorentson on October 17th, 2018 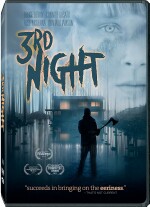 3rd Night is one of those films that sneaks up on you.  It’s shot on a low budget, there are no big named actors involved, and it doesn’t have a big studio backing.  It’s the kind of film that seems to be released hoping that by word of mouth or sheer luck, people will stumble upon this film.  You go to your random Wal-Mart or Target and you see these small, independent titles all the time, and I’ve always wondered how many of these are picked up as a cold buy, simply from the customer looking at the cover and reading the box. 3rd Night is a film that is going to have to go through this struggle, but for those who do decide to pick this up or find it on some other platform, it’ll be a delightful little surprise.  It’s a 71-minute horror fest that is better than you’d expect despite having some strange flaws that left me questioning some of the film’s choices; despite that it still works.

This is Adam Gravely’s first time directing a feature film, and for the film he also serves as a writer, producer, and an editor, so obviously this is a project that meant a lot to him.  It’s a good thing he has stuck with this film through the whole process, because there is a lot going on in this film when it comes to what kind of horror it is, and for some filmmakers the struggle with the numerous sub-genres would usually cause the filmmaker to just stick with one direction, and that would have severely hurt the uniqueness of this picture.

When a young couple decide to move into a farmhouse in the middle of the bush land of Australia, it’s so they can escape the city, but every horror fan knows being in the middle of nowhere is a recipe for murder and mayhem. Meagan (Jesse McGinn) and her husband, Jonathan Reid (Robert Hartburn) are a nice enough young couple, and when we meet them it is their first night staying at their new home, and it’s this same night they are harassed by a strange stalker who leaves them cryptic messages.  While I’m fine with a lean film and not wasting time to get into the horror, in this instance it feels a bit rushed, as immediately their pet cat goes missing, and we’ve never even gotten to see them spend time with the animal.  It’s not a big deal, but it still felt a bit rushed, since once night falls, Meagan believes someone is watching them.

To make matters worse, we eventually meet a man who we see spying on the couple, and soon after that we see him teaching his son how to skin an animal and cook it.  So are they the suspicious people leaving the notes?  Did they find the cat and kill it?  It’s a misdirection move that is a bit too obvious for me, but they do work as villains in their own right, who live off the land and decide to harass the family as well.  So then enters a possible supernatural element, because it seems the killer can come and go into the house without being noticed.  Then there are the notes that imply that over the course of three nights bad things will occur.  The notes have a sing-song nature to them that remind me of the faux nursery rhyme we’re all familiar with from the Nightmare on Elm Street series.

The family is provoked and driven to madness by their tormenters. The police don’t want to help, and they don’t seem to know where they can go, so they decide to make a stand at the house. This is where the film kind of goes into a home-invasion/slasher mode.  The problem is we don’t get a why is this all happening until the closing moments of the film, and it’s where the film gets an added twist that makes plenty of room for there to be prequels and sequels galore, which is a bit impressive.  You can tell Adam Gravely had a lot of horror films that influenced him here, and despite how you may think you have this film figured out, it’s the twist that changes everything and almost provokes the viewer to want to watch it again to see if there were clues earlier that they may have missed.

The cinematography offers up some beautiful imagery that helps give the viewer a sense of isolation, while when it moves indoors and there is a possibility of someone being in the house, we definitely feel trapped with the characters.  This is one of those titles I hope we get a sequel to, if only to deliver more back-story, which I believe would make for another fun horror tale.  Is the film perfect?  No, but if my only complaint is that I wanted more, that isn’t such a bad thing.  It had me looking at the time, not because I wanted it to end, but because I felt it was ending too soon with too many questions hanging in the air.  Hopefully this finds an audience, for those having their own 31 nights of terror at home; this would be a fun little entry if you like to give independent films a chance.

Brent Lorentson is a horror writer and film critic based out of Tampa, Florida. With a BA in Digital Film, he co-wrote and co-directed Scavenger Hunt. His short stories have appeared in various horror anthologies. In 2019 his short script Fertile Blood will be a part of the anthology horror film Slumber Party. He is currently working on his first novel A Dark and Secret Place set to be released in late 2019. Favorite Films: Taxi Driver, Fight Club, I Saw the Devil, The Wild Bunch, Dawn of the Dead, A Clockwork Orange, Pulp Fiction, Heathers, The Monster Squad, and High Fidelity.
Arizona (UHD Blu-ray) (4K) Ant-Man and The Wasp (Blu-ray)