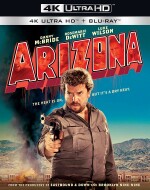 I absolutely loved The Big Short, which managed to extract smart, insightful comedy from one of the gloomiest chapters in recent American history. But if there’s one minor critique I had, it’s that the 2015 Adam McKay film sort of glossed over the human cost of the nationwide financial collapse. On the other hand, Arizona — a violent, over-the-top black comedy that’s billed as being “from the producers of Eastbound & Down and Brooklyn Nine-Nine” — is set in 2009 and focuses almost exclusively on a handful of hard-luck losers trying to survive the housing crisis.

The film is set in fictional Harding, Arizona, where single mom Cassie Fowler (Rosemarie DeWitt) lives and works as a real estate agent. As you can imagine, 2009 was the worst possible time to be working as a real estate agent, and Arizona opens with Cassie lightly stretching the truth to try and sell a house before scrambling to prevent a neighbor’s suicide attempt. In addition to struggling at work — where she has to deal with jerky boss Gary (an uncredited Seth Rogen) — Cassie has a surly teenage daughter named Morgan (Lolli Sorenson), who doesn’t bother hiding the fact that she’d rather spend time with her father/Cassie’s ex-husband Scott (Luke Wilson).

Cassie’s already tumultuous life goes into a tailspin when a dimwitted, disgruntled customer named Sonny (Danny McBride) barges into her office and commits a crime that Cassie witnesses. As a result, Sonny abducts Cassie and keeps her prisoner at his massive, depressingly unfinished house. Initially, Arizona appears like it’s going to be a two-hander between Cassie and Sonny, who detests the dishonesty of real estate agents like the one who sold him his oversized house. But eventually, other people find themselves in danger as Cassie fights to escape her comically crazy captor.

Jonathan Watson (a seasoned assistant director) makes his feature film debut with Arizona, which was written by Luke Del Tredici (30 Rock). The script is both simple and sneakily shrewd: Sonny, like most characters played by McBride, is clearly a lunatic. But it turns out that Cassie was somewhat swindled into buying her own house in Harding, which gives her some common ground with her kidnapper and places some of the responsibility on irresponsible home buyers trying to live above their means.

Speaking of Harding, Arizona gets plenty of darkly comedic mileage out of the nearly-abandoned residential community. (Yelling for help doesn’t do much for Cassie since all the houses are abandoned, and the unmotivated guard at the front gate hasn’t been paid in months.) There’s also a funny bit about how all these interchangeable residential communities have similarly interchangeable Spanish names, which complicates a rescue attempt in the final act.

Arizona is a rare (and well-deserved) big-screen starring turn for DeWitt, who’s been great in everything from Mad Men to Black Mirror but is usually saddled with wife/sister roles in movies. DeWitt resourceful and likable, even when Cassie is bending the truth a little to make her life better. The actress’s serene demeanor is a good counterpoint to McBride’s patented profane persona. The comic actor excels when he plays dangerously stupid characters whose actions make complete sense to the idiots he brings to life on screen, and Sonny is no exception. Wilson’s laid back persona is a good match for his character as Scott (very slowly) attempts to come to the rescue. The cast also includes Kaitlin Olson (as Sonny’s similarly fiery ex) and David Alan Grier (as a cop who’s probably a little too out of practice).

Without spoiling too much, I feel I should point out that even though this is a comedy, a fair amount of people die in Arizona. I felt the film faltered a bit whenever it leaned too far in the suspense/thriller direction and presented Sonny as almost a horror movie villain. (McBride’s over-the-top performance made that sort of extra sauce feel excessive.) Still, this is an outrageous and entertaining black comedy about desperate times and desperate measures.

Arizona is presented in an aspect ratio of 2.35:1. The ultra-high definition 2160p image is arrived at with an HEVC codec at an average of 56 mbps. The visual presentation here very much leans into the titular location: flesh tones in Arizona are warm throughout (just look at McBride’s sunbaked skin) and there’s a yellowish tint during daytime indoor scenes. On the other hand, the cranked-up contrast for outdoor scenes results in an (intentionally) overexposed image that makes the Harding, Arizona sun feel even more oppressively hot. Pops of color (Sonny’s dark red backwards hoodie; a lawn that has been painted green) are few and far between. This HDR image still manages to dazzle, however, by offering tremendous fine detail for the overhead/panoramic shots of the movie’s desolate gated community. Black levels offer strong separation during the movie’s violent climax.

The DTS-HD Master Audio 5.1 track is not as dialogue-driven as most comedies. The subs offer strong, impactful support during the movie’s outbursts of violence (gunshots, whacks to the head, and one explosion) and musical cues (Joseph Stephens’ comically aggressive thriller score and hip hop cuts like “Guns Money Sex”). The entire surround sound field gets a nice workout for tracks like Shirley Bassey’s “Jezahel,” while the rear speakers in particular offer low-key and dynamic ambient noise. (There’s a scene where Cassie and Morgan are driving in the car together, and you can hear the sound of the world whooshing by beyond the window.)

The bonus material is available on both the UHD and Blu-ray copies of the film.

The Making of Arizona: (8:39) A pretty standard behind-the-scenes featurette that includes stars Rosemarie DeWitt, Danny McBride, and Luke Wilson offering an overview of their characters and discussing what attracted them to the story. (McBride says the strange, darkly comic script was written six years ago.) They also have praise for first-time feature film director Jonathan Watson, who had previously collaborated with McBride as an assistant director on Eastbound & Down and Vice Principals.

The film reminds me of some of the early work from the Coen Brothers, and not just because it has Arizona in the title.  This newer Arizona is also about dumb ordinary folks whose lives very quickly (and very violently) spiral out of control, but with a more profane (shout out to Danny McBride and his team) edge.

Arizona premiered at Sundance earlier this year, but didn’t get much of a theatrical release. You should give this one a look if you enjoy comedy with a dark twist and watching people pursue the American dream in their own misguided way.