“31 Nights Of Terror” Haunters: The Art of the Scare

Posted in: Disc Reviews by Brent Lorentson on October 27th, 2018 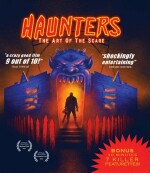 Haunted houses and Halloween seem to go together like turkey and Thanksgiving, but over the years the haunted house experience has evolved to keep up with those who have grown numb to your typical jump scares.  Sure, there are still the standard haunted houses that you’ll come across when visiting the carnival, or mazes put together by school groups for fundraisers.  But for those who are really looking to be scared, you either have to fork over the big bucks to get into Universal’s Halloween Horror Nights, or you have to scour the internet to find a haunt nearby. 2017’s  Haunters: The Art of the Scare is a documentary that takes us behind the curtain to what goes on at these attractions and explores how a sub-culture that has evolved of haunted houses that have been created to push the boundaries mentally and physically.

The core of the documentary is split between two men who design and build haunted houses in and around their own homes.  Donald Julson is in the haunted-house business not to make money, but simply out of love for creating an experience where he can scare people.  We get to see and hear how he and his wife struggle as he spends months preparing the haunted house that he only has run for four hours on Halloween night.  It’s a project Julson does out of love, and it’s clear that his wife doesn’t approve, and you kind of have to wonder how this marriage can work when she despises what he loves so much.

While we do get to spend plenty of time with Julson, the main focus here is on Russ McKamey and his infamous McKamey Manor.  McKamey has no problem admitting over the years he’s spent over 500 thousand on his attraction, but to be fair, it is like no other experience out there.  Waivers need to be signed before your experience begins, and it borders on being a simulated kidnapping and torture experience that assaults the senses for upwards of four hours.  When we get to see footage that Russ shoots, we see participants going in with big smiles, but later they are sobbing and begging to be released.  While some of these more intense haunted houses have a “safe word” you can say to end the madness, McKamey doesn’t believe in “safe words”, and this is where some of the controversy lies.  When I finished watching this, I went online and found a few of the videos Russ has put together that follow people on their experience. Well, I have to admit it gets pretty intense, and because it goes on for so long, I’m impressed no one has died while going through this (though in the documentary he admits one person did have a heart attack).

Also sprinkled throughout are interviews with scare actors who have been dressing up for years and scaring people at some of the nation’s most popular haunted house destinations.  We get to hear the thrills they get out of scaring people as well as the bumps and bruises that come from scaring those who are heavily intoxicated.  But also we get interviews with Jason Blum (Happy Death Day), the Soska Sisters (American Mary), Jessica Cameron (The Song of Solomon), and many others in the film and haunted-house industry.  It’s a documentary that attempts to answer why we love to be scared so much, but I’m not sure it could ever explain why people are willing to endure so much more in the more intense attractions.  Director John Schnitzer has put together a fun and fascinating documentary that kept me engaged throughout and left me wanting more.

Brent Lorentson is a horror writer and film critic based out of Tampa, Florida. With a BA in Digital Film, he co-wrote and co-directed Scavenger Hunt. His short stories have appeared in various horror anthologies. In 2019 his short script Fertile Blood will be a part of the anthology horror film Slumber Party. He is currently working on his first novel A Dark and Secret Place set to be released in late 2019. Favorite Films: Taxi Driver, Fight Club, I Saw the Devil, The Wild Bunch, Dawn of the Dead, A Clockwork Orange, Pulp Fiction, Heathers, The Monster Squad, and High Fidelity.
“31 Nights Of Terror” Haunting Guide Part 1: Mill Creek Entertainment Get Shorty (Collector’s Edition) (Blu-Ray)