Posted in: Disc Reviews by Michael Durr on October 29th, 2018 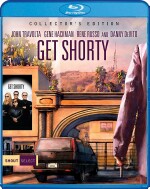 Get Shorty was one of my fondest cinema experiences. I was twenty years old, in college, and had just met a lifelong friend named Robert. He took a bunch of us to a place where you could actually eat a meal, have a drink, and watch a movie at the same time. Back in 1995, that was a big deal; now, of course, we take that experience completely for granted, with such places as Alamo Drafthouse. Anyway, the truth was that most everybody except me wasn’t really interested in the movie. Of course, being the cinephile I am, I absorbed every moment, and it became one of my favorite pictures. It’s only fitting that I finally get to do a disc review about this amazing movie.

We start off the movie in Miami, Chili Palmer (played by John Travolta) and Tommy Carlo (played by Martin Ferrero) are talking about an old theater on Biscayne that they should buy. Ray “Bones” Barboni (played by Dennis Farina), also a gangster, comes up and makes a couple of horrible jokes at Chili’s expense and then leaves. Soon, Chili and Tommy leave the diner, but not before Chili has to retrieve his coat.

It seems that Bones has taken Chili’s coat, because it was cold outside, and also because he can. Well, since the restaurant is not fronting the $379 , it looks like Chili has to pay Bones a little visit. Well, that visit does not go well for Mr. Barboni as he takes a punch to his nose for his troubles. Oh, and Chili got his coat back.

Obviously, Ray is very upset about this turn of events and goes to visit Chili at his office (which is at the back of a barber shop). Chili hears the commotion from the front, and when Ray makes his way through the door to the office, he is met with a gunshot right at his scalp, removing hair and sanity from the gangster.

Bones goes to his mob boss, Jimmy Capp (played by Alex Rocco) and complains about Chili. Jimmy tells Bones that he can’t do anything about it, as Chili is handled by Momo (played by Ron Karabatsos). As long as Momo is alive, neither Bones nor Jimmy have any say in the matter of Chili’s affairs. In the next scene, Momo is taken to a surprise 65th birthday party. However, the birthday party makes Momo collapse and die of a heart attack. It’s time to cue the opening credits.

What a jazzy number. Now that Ray is Chili’s boss, he busts in one day to the same barbershop and demands to see Chili’s books for his loansharking. One of the entries is not up to snuff, and Ray is adamant about seeing it fixed. It is for a dry cleaner named Leo Devoe (played by David Paymer), who apparently died in a plane crash. Well, Chili has to collect from somebody, and he decides to go and talk to Leo’s wife, Fay (played by Linda Hart).

As it turns out, Fay tells Chili that Leo is indeed alive and in Las Vegas, living it up. Chili learns where Leo is staying thanks to some inside help. However, that inside help also comes with a favor to ask. It seems that Chili should also investigate a Harry Zimm (played by Gene Hackman), a Los Angeles movie director who owes money as well. The loan shark agrees and decides to jet off to Los Angeles.

Next scene, Harry Zimm and Karen Flores (played by Rene Russo) are sleeping in bed at Karen’s house when they hear a sound. Harry reluctantly goes downstairs and meets Chili Palmer, who is going to tell him how it is. From then on, Harry’s, Karen’s, and Chili’s lives are changed forever.

The general gist of the story from here on is that Harry has a script that he needs investors for, and part of the draw is getting Martin Weir (played by Danny DeVito) to be in the starring role. The tone of the movie from a basic script read would probably indicate that the movie is way more serious than it would appear. However, the strength of the movie comes from the many straight laughs that the various actors are able to produce with body language and less focus on “funny” moments. Also, I’m a sucker for movie-within-a-movie plot lines that speak so accurately to the world that they are trying to portray.

This movie also boasts a star cast that is perhaps one of the best ensemble movies I have ever seen. It seems like every part is perfectly played right down to the smallest part, such as Doris, who is played by Bette Midler. But all of this is fronted by John Travolta, who rightfully received a Golden Globe for his performance. His monologues, mannerisms, and interactions with other characters are impressive and fun to watch.

The film is shown in a 1.85:1 widescreen picture. The big drawing card with this collector’s edition is that this is a brand new 4K transfer. I think most of us would prefer an UHD presentation at this point, but there is a suitable uptick in the quality. Colors are a tad bit sharper, and the film has a more natural look to it when comparing it with my original edition Blu-ray. The cinema feel from twenty-plus years ago is restored when watching this movie. However, I still think it is a tough sell if you already own this on disc.

The audio tracks are DTS HD 5.1 and 2.0 stereo tracks in English. English subtitles are also provided. Unlike the picture, this is the same audio track we have been used to for the last half dozen or so years. Get Shorty is not an action movie (despite having a few scenes that might indicate otherwise). Therefore, this is a very dialog-heavy movie. The dialog is clear and easy to decipher.

The action that I mentioned earlier has some nice effects for the surrounds, but it never feels like those sounds ever outdo any of the dialog. I would also be remiss if I did not mention the jazzy soundtrack that really encapsulates the movie. It’s upbeat, flows well, and plays a perfect accompaniment to everything going on around it. Overall, it’s low-key, but nobody really ever expected this movie to generate such a following, so the sound budget was meager at best.

Note: if you need foreign language options such as French or Spanish, you might want to keep around your old Blu-ray, as this collector’s edition dropped all of that support (presumably to keep the bit-rate high).

Audio Commentary with Director Barry Sonnenfeld: As the case with all of these extras, most of them are from the first DVD special edition or even the laserdisc (commentary, deleted scene, trailer, etc). This classic commentary from Barry is certainly what you would call by-the-letter. He describes the scene, how or where he shot it, what part might be ad-libbed, and any other issues he had with the scene. Then once the scene ends, he does the same exact thing for the next scene. It comes across as very technical but very dated in other areas.

Get Shorty – Look at Me Featurette 26:56 : Elmore Leonard, the author starts us off with how he wrote the book and then how it got optioned for a film. It moves on to the director as well as Scott Frank, the screenwriter, to describe how they got involved with the movie. The rest of the featurette focuses on the stars such as John Travolta, Danny DeVito, and others.

Get Shorty – Wiseguys & Dolls 20:30 : As the title implies, this featurette focuses on the female stars such as Rene Russo and the gangsters such as Delroy Lindo.

Going Again 5:35 : Outtakes from the long monologue scene where John Travolta, Danny DeVito, and Rene Russo are at Martin Weir’s house. The amount of preparation Travolta did in order to pull it off was quite amazing.

Get Shorty Party Reel 5:50 : Some very dated and rough footage of behind-the-scenes involving cast and crew from the movie.

Page to Screen of Get Shorty 29:35 : Peter Gallagher is our host for this featurette as it does a more in-depth look of comparing the novel to the movie.

Graveyard Scene & Featurette 7:47 : This extra scene features Ben Stiller shooting a film in the graveyard and the crazy antics going on. Barry describes to us the scene and how it disrupted the flow of the movie and had to go to the cutting room floor. It is a very funny scene, and it can be debated to death whether it should have stayed. But the scene has been on disc for a while, so most fans are familiar with it now.

Trailer 2:38 : The old trailer in all its wonderful glory. Interestingly enough, it uses footage from the Graveyard scene, so at least that scene showed up in the promotion of the movie.

Notes: This edition does feature a reversible cover. The reverse cover is the classic cover art that we are used to from prior editions.

Get Shorty was a very successful movie and was #1 in the box office for three straight weeks. It would eventually make well over $100 million worldwide, which for 1995 was a very sizable total gross. This new collector’s edition from Shout Factory sports a brand new 4K transfer, but unfortunately nothing else except a shiny new cover. It even goes as far as to remove language and subtitle options that were previously available.

Thankfully, the new transfer is top-notch, and the old soundtrack serves its purpose. Also, it’s probably not possible to include any more extras at this point unless we get a historian commentary or some kind of retrospective (which most of the actors would be in their 60’s or 70’s by now). It also doesn’t help that the new disc boasts a $35 MSRP, or $26 in Amazon Dollars. So it is a tough sell, perhaps one that is better revisited when it goes sub-$20. Recommended for people who don’t have this amazing movie in their library. For fans, they are probably better off waiting until it gets a UHD release. Enjoy.

Michael Durr has been reviewing movies for the better part of fifteen years now. He primarily enjoys thrillers, sci-fi, animation and even a little courtroom drama. His favorite films include Escape from New York, the Goonies and anything with Alyssa Milano. When he’s not praising Kurt Russell as the greatest actor of our time or scratching his head over a David Lynch flick, he’s spending time at home in Texas with his lovely wife, Lori and his amazing son. How they put up with him is a mystery, but even Basil Rathbone doesn’t have the time to solve that one.
“31 Nights Of Terror” Haunters: The Art of the Scare “31 Nights Of Terror” Haunting Guide Part 2: Diabolik DVD