“31 Nights Of Terror” The Landing

Posted in: No Huddle by Brent Lorentson on October 30th, 2018 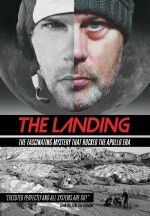 Apollo 18 at one time was meant to be one of several missions NASA had set up that would take astronauts back to the moon.  Due to the fallout from the incident involving Apollo 13 and budget cuts, all the missions were scrapped and focus shifted to the shuttle program.   Conspiracy theories have seemed to always swirl around the Apollo missions, the more famous being about whether or not man ever reached the lunar surface and whether everything we saw about the moon landing was really filmed on a Hollywood soundstage.  The Landing takes things a step further as a faux-documentary about an Apollo 18 launch that resulted in one of NASA’s greatest disasters (that never happened).

The films focus is on Bo Cunningham (Don Hannah), who was the pilot for the Apollo 18 mission.  A lot of effort is put into having us believe that he was part of this old shuttle mission, as we are shown numerous old photos of a young Cunningham in NASA clothing and interviews with those that were part of the NASA program.  All this is nicely done to set up for the disaster where there was a mishap during reentry and Cunningham was forced to crash-land in the desert of western China.  Where the conspiracy aspect comes into play is, did Bo cause their mishap on purpose?

I’m on board with this film at this point. I’m all for alternative histories and a project like this; there is a lot of freedom to simply take the story wherever you desire…it’s where they take this that the film lost me.  The crash resulted in two other astronauts dying, leaving Bo as the lone survivor who eventually gets rescued.  There is an attempt to develop Cunningham as a possible spy, and then there is the other direction the film goes by presenting Cunningham as a jealous man simply seeking a little revenge.  The problem is there is a lack of evidence to point to either direction no matter how hard the interview subjects attempt to push this narrative.  Here is my problem: you have a chance to develop any story you want, and the hook you go with is jealous lover?  This falls apart quickly for me, because the more you look at this reasoning and how the astronauts died, it just doesn’t make sense.  Had they stuck with an espionage/ spy angle, at least that could seem to be more believable considering it was the Cold War.

David and Mark Dodson do a fairly good job at presenting this in the most authentic way possible.  From manufactured documents to the CGI images that plant the actors in alternate settings, the effort is definitely apparent that they wanted this to fool some people at first glance.  Even the reenactment footage helps to serve the narrative they are trying to push. This definitely looks like a film you’d find on the History Channel and have every reason to believe it was the real deal.

The first half of the film had me hooked, but they lost me once they injected the murder plot of the story.  It’s a fun experiment, but it just didn’t quite hold my interest towards the end.  There is definitely an audience that will enjoy this, though.  Over time I’m curious how many people will come across the film and simply accept it as a part of reality. It’s little things like that where I do find this film entertaining. If given enough of a promotion budget, I’m sure this could reel in plenty of viewers, but in a time where there are so many films on numerous platforms, to stand out from the pack is becoming  all the more difficult.

Brent Lorentson is a horror writer and film critic based out of Tampa, Florida. With a BA in Digital Film, he co-wrote and co-directed Scavenger Hunt. His short stories have appeared in various horror anthologies. In 2019 his short script Fertile Blood will be a part of the anthology horror film Slumber Party. He is currently working on his first novel A Dark and Secret Place set to be released in late 2019. Favorite Films: Taxi Driver, Fight Club, I Saw the Devil, The Wild Bunch, Dawn of the Dead, A Clockwork Orange, Pulp Fiction, Heathers, The Monster Squad, and High Fidelity.
Tuesday Release Round-Up For Tuesday October 30th, 2018 Sorry To Bother You (Blu-ray)