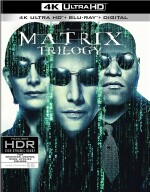 Howdy, Partners. Johnny’s working down at the bunkhouse today, so here I am to let you know what might be causing a stampede down at your video store. We’re heading into the final hours of our 31 Nights Of Terror and it’s been a howling good time here on the Upcomingdiscs ranch. Here’s a couple of titles you should look for this week at Upcomingdiscs. Warner Brothers has chosen The Matrix Trilogy for the UHD/4K treatment this week. RLJE Films sends Nicholis Cage to the Devil in Mandy out on Blu-ray. Shout Factory wants just the facts in the feature film version of Jack Webb’s Dragnet on Blu-ray with Tom Hanks and Dan Aykroid. In theaters this weekend get caught up in the landslide with the Queen/Freddie Mercury Bio-pic Bohemian Rhapsody  from 20th Century Fox. If you’re feeling like a little Italian, we’ll be reviewing the new version of Dario Agento’s spaghetti nightmare classic Suspiria from Amazon Studios.

Gino Sassani is a member of the Southeastern Film Critic's Association (SEFCA). He is a film and television critic based in Tampa, Florida. He's also the Senior Editor here at Upcomingdiscs. Gino started reviewing films in the early 1990's as a segment of his local television show Focus. He's an award-winning recording artist for Omega Records. Gino is currently working on his 8th album Merchants & Mercenaries. Gino took over Upcomingdiscs Dec 1, 2008. He works out of a home theater he calls The Reel World. Favorite films: The Godfather, The Godfather Part II, The Body Snatcher (Val Lewton film with Karloff and Lugosi, not the pod people film), Unforgiven, Gladiator, The Lion King, Jaws, Son Of Frankenstein, The Good, The Bad And The Ugly, and Monsters, Inc.
“31 Nights Of Terror” Haunting Guide Part 2: Diabolik DVD “31 Nights Of Terror” The Landing