Sorry To Bother You (Blu-ray)

Posted in: Disc Reviews by Jeremy Butler on October 31st, 2018 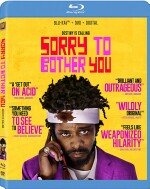 So the director had my undivided attention until he went completely sideways. I mean, I was engaged; I was feeling the message behind the film. I found the characters to be original, and the things that they had to say were unlike anything I had seen in recent years. Not to mention that opening scene was the perfect way to bring the audience into this world; and then it all came crashing down. Despite this disappointment, Sorry to Bother You remains among one of the most creative cinematic experiences that I had this year. I wanted very much to love the film, but sadly I can’t say that. I liked it a lot, especially the first half. It is the kind of film that was likely the gem of the film festival circuit. The number one slot at the box office will be out of reach for it, though.

The movie is centered around Cassius Green (Lakeith Stanfield, Straight Outta Compton), a directionless young man who has yet to find something that matters to him. He lives in his uncle’s garage, and he is struggling to find work.  Needless to say, he does not have a lot of hope, with the exception of his girlfriend, Detroit (Tessa Thompson, Creed), a talented artist and revolutionary who brings sunshine into our lead’s otherwise dreary world.  Eventually he finds work as a telemarketer, but he has trouble keeping his customers on the line. You all should understand; what is your number-one response when someone tries to sell you something? It is only when he receives a tip from a coworker to use his “white voice” that things begin to turn around for him. Suddenly, he begins to rack up sells left and right, causing him to quickly rise through the hierarchy of the company.

Coinciding with his rise through the ranks, he is entangled in a dispute between management and his fellow coworkers who are looking to unionize and earn higher wages. As he achieves greater and greater success, Cassius begins to lose sight of his morals and starts placing money and possessions over his friends as well as his relationship.

Sorry to Bother You was a worthwhile story that explored the importance of values as well as how easy it is to get caught up in material things, which can cause you to become morally bankrupt. Those are the principles that shine in the very beginning and what make the film worthwhile, as they speak to everyday matters that we as a society continue to battle to this day. If the film had stayed along this track, it would have been phenomenal in my eyes. However, if I had to guess, whatever drugs the director was taking to assist him with the creation of this picture began to kick in around the movie’s midpoint, because that’s when things got surreal. I can’t really go into detail as it would give too much of the plot away, but trust me, you will know it when you see it.

Despite this, I still found the film to be witty and creative. Lakeith Stanfield is great as the lead character, and I have been a fan of Tessa Thompson dating back to her tenure on Veronica Mars. Getting back to Stanfield, he brought some mannerisms with the characters that really spoke to me, such as his nervous personality. His character is very deep and not afraid to speak his mind, but Stanfield does it in such a nervous way that it makes the character more relatable and an everyman. For example, when attempting to call out his landlord, who is also his uncle, on the unethicalness of charging rent when land should be for all humanity, an argument he was attempting to make because he was four months behind on his rent.  Another great scene is between Stanfield and Jermaine Fowler, who plays his best friend Salvador, when in what I consider to be a reverse confrontation the two stare each other down, and they obviously have an issue with one another but instead attack each other with positive and life-affirming statements.

Another aspect that I enjoyed was the up-close-and-personal perspective on the telemarketing calls. When Cassius called you, you saw him and his desk travel into your living room or bathroom, while he gave you his sales pitch. This was a clever plot device, as it added authenticity to the situation. I wasn’t really able to grasp the importance of Tessa Thompson’s ever-changing earrings, but I give her major credit for her live theater performance, because I wouldn’t have been able to keep a straight face. Not to mention, she quoted one of my favorite and one of the cheesiest martial arts movies of all time.

Sorry To Bother You is presented in its original aspect ratio of 2.40:1. The 1080p image is arrived at with an AVC MPEG-4 codec at an average 30-35 mbps. This film has a unique look that helps to reinforce the fantastic elements of the story. It’s very much a fable and lives in a world with colors that are often just a little off from reference. It’s not just a matter of color correction, temperature, or saturation. There’s an almost comic-book 4-color appearance that doesn’t always hold up in the Blu-ray. It ends up looking fake, where as I recall the theater experience to be more atmospheric and stylish rather than merely off. Black levels are weak and often make the few darker scenes appear somewhat muddy. The stop-motion effects stand out as particularly sharp, however, and fall into that dream-world style I’m talking about.

The DTS-HD Master Audio 5.1 is mostly there to support the dialog. That makes this even more creepy than the theater experience. The ADR is intentionally bad with other actors providing the “white” voices. The film is intended to sound rather amateurish, and it certainly succeeds there. Little to no sub support leads to an audio presentation that is, I’m guessing, intentionally thin.

Beautiful Clutter With Director Boots Riley: (11:55) Just as he was on the audio commentary, Riley is quite self-absorbed here. He talks more about himself than the film while admitting he wasn’t trying to make a good film. He wants to be important. Guess what, Boots? Important people make good films.

In conclusion, there are some goods to take away from Sorry to Bother You, and there are some things that were over my head. I would characterize the film as an artistic movie, as it is willing to take chances that other stories would not be willing to attempt. That could also explain why I struggled with the latter half of the film. Well, if you’re particularly good with symbolism in films, you may get a kick out of the picture.

Jeremy Butler is a film school graduate of the International Academy of Design and Technology. He is been writing for Upcomingdiscs since 2012; however, movies have played a big part of his life for much longer. Favorite genres include horror, science fiction/fantasy, and comedy. Favorite movies are V for Vendetta, Boondocks Saints, Kiss Kiss Bang Bang, and The Godfather.
“31 Nights Of Terror” The Landing The Matrix Trilogy (UHD Blu-ray) (4K)