Posted in: Disc Reviews by Michael Durr on November 2nd, 2018 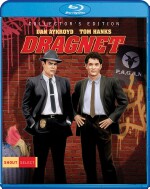 When I think of buddy cop movies, two movies spring to mind as favorites. No, not Lethal Weapon and Beverly Hills Cop. Not Bad Boys 2 and Rush Hour, either. While all of those are good films, the best for me are Hot Fuzz and 48 Hours. 48 Hours was a classic match-up of Eddie Murphy and Nick Nolte, while Hot Fuzz lampooned every single cliche they could think of and then some. Also, if you said The Heat or Ride Along as your two favorite buddy cop movies, I’m going to need you to move along. Move along to reading my Blu-ray review for Dragnet, because seriously, you need better taste.

“Because even in the City of Angels, from time to time, some halos slip. That’s where I come in, doing my job to the best of my ability on a daily basis. I work here. I carry a badge.”

Cue the Dragnet theme. We have just heard Sgt. Joe Friday (played by Dan Aykroyd) do a little narration about a place called Los Angeles. He is the nephew of the fabled Detective Sergeant Joe Friday and is even working the same precinct, though some of the other names in this story have been changed to protect the innocent. For example, George Baker is now called Sylvia Wiss. John Ceballos is now Barbi Benton. And so on and so forth.

We cut to a street in downtown Los Angeles with copies and copies of a gentleman’s magazine named Bait lying on the cold asphalt. Well, it is Los Angeles; I suppose it could be warm asphalt, but I digress. The police are surveying the scene, and one of them hears a siren and wonders who called the fire department. A fireman (played by Jack O’Halloran) shows him the fire and then knocks him out cold. Apparently Jerry Caesar is going to be out of business. A P.A.G.A.N. card was left at the scene.

Joe Friday walks into the Robbery Homicide division at the precinct where we works. He learns from the Captain (played by Harry Morgan) that his partner Frank has quit. He went to go work at a goat farm. Did you know that when goats give birth, they are “kidding”? There is a joke that lasts for hours. It would appear that Joe needs a new partner, and one has been assigned, Pep Streebek (played by Tom Hanks), who appears like he just got back from deep undercover.

Detective Friday proceeds to read him the riot act, or Section 3-605.10,.20.22.24.26.50.70.80. By 9:05 am, Pep Streebek looks a lot more like a cop, or at least Tom Hanks. Off to the zoo. There have been several crimes. A giant anaconda is missing. So is a Madagascar fruit bat. A lion has been given a Mohawk. A large orange-haired baboon was taken from the White House. Oops, my mistake; he’s still there. (Remember to vote this Tuesday, kids.) The two cops take down the information and also receive three P.A.G.A.N. cards that were left behind by the mysterious organization.

From there it’s off to visit Jerry Caesar (played by Dabney Coleman), producer of the magazine Bait, one of the lead entrepreneurs of smut in this fine city. He wants his magazines back and wants the police to find them. Joe Friday doesn’t really care for the way Mr. Caesar makes his money, and Streebek would like to spend time talking with the various Baitmates on the property. Hey, there is Sylvia Wiss (played by Julia Jennings), the first Baitmate ever. Barbi Benton was nowhere to be found.

Yes, No, Perhaps and *burp* Probably not. Dragnet has a lot going for it. The two leads, Aykroyd and Hanks do a fantastic job in this film. They keep the plot moving, and the jokes are rapid-fire. They have a lot of help from the talented cast including some inspired work by Plummer, Coleman, and others. They stick to the parody and homage of Dragnet for the first hour or so, and then unfortunately, things go south (no, not San Diego) in a hurry.

The last part of the movie descends into some giant action flick where things go boom, and we have Joe Friday trying to be some crazy hero to get the girl. It is almost as if somebody found a script for Bad Boys about seven or eight years early and tried to insert it in. The film also suffers from 80’s-itis, that condition where they try to throw in a bunch of scantily clad models, including one near topless scene for absolutely little to no reason at all. Not that I usually have issue with such a thing, but it’s a “PG-13” movie masquerading as a “R” movie for almost no reason at all.

It is still a good movie despite my criticism. The laughs are spot-on for most of the film. But I just feel that in this case it should have stuck strictly to the homage. The movie would have aged a lot better, and it feels very stuck in the 80’s instead of the 50’s and 60’s show it was trying to emulate.

The film is shown in a 1.85:1 widescreen picture. This is the first time on this shore we have seen a 1080P transfer for this picture. Maybe I was a little drunk on 4K transfers after the Get Shorty review, but this one to me was not quite as strong. Colors are decent, but feel a little muted, especially in the outside scenes. (The P.A.G.A.N. party comes to mind.) Blacks are good, and there was some detail to the proceedings; it is a fine presentation. Certainly better than what I’ve seen of Dragnet‘s older releases on disc.

The audio tracks is a DTS HD 2.0 stereo track in English. The English subtitles are also provided. Dialog is good, and I did not have much trouble understanding any of the talking points in the movie. Action could be better, as while the story has been updated to feel like its in the 80’s, the sound still seems to come from the 60’s. It’s far from bad, and most purists will find it suitable, but it does not have much life. Finally, please see my note in the special features below where one of the features had some major issues.

New:Audio Commentary with Pop Culture Historian Russell Dyball: Russell, for those who don’t know, is the associate producer @ Shout Factory who does a crap-load of research for these commentaries. He comes off a little dry, but he does throw in a ton of information about the movie and many things related to the movie. This includes referencing Never Too Young to Die, a bizarre adventure comedy with John Stamos and Gene Simmons which I suddenly want to see now. He sometimes veers off on some weird subjects, but he does a great job of staying vocal for over an hour and a half.

New:A Quiet Evening in the Company of Connie Swail – Interview with Co-Star Alexandra Paul 25:02 : Connie Swail was the girl interest of Joe Friday during the movie, and we are joined by the star behind Connie, Alexandra Paul, in this new interview. To be frankly honest, the years have been very kind to Ms. Paul, as she goes over the casting process, the differences between Dan (very professional) and Tom (very laid-back), and other facets of production. A fun and candid listen.

“Just the Facts” – A Promotional Look at Dragnet with Dan Aykroyd and Tom Hanks 45:59 : I assume this bit came during the post production of the movie where Dan and Tom do a full-length documentary about all things Dragnet from the old radio serials to the first movie to the famous series and everything else in-between. Of course the “new” movie is also referenced. Fantastic for fans of old and new Dragnet, it’s nice to see Aykroyd and Hanks be a little more laid back. I will note that parts of the documentary had the sound coming from the left front speaker only. It was actually a little bizarre and should have been balanced to the front speaker.

Original Theatrical Trailer & Promos 4:33 : Six different clips here of one trailer and five TV spots. Trailer, TV Spot, 1,2, and 4 are very similar to each other. TV Spot 3 (subtitled “Suspects”) and TV Spot 5 (subtitled “Those are the Facts”) have some different scenes included.

Notes: There is a listing of a Photo Gallery on the back cover; however, I could not find anything resembling this on the actual disc.

More Notes: This edition does feature a reversible cover. The reverse cover is the classic cover art that we have accustomed to from the film posters and DVD covers.

Dragnet opened at #1, and was there for two weeks. It finally finished at $66 million worldwide on a $20 million dollar budget. So a pretty good success for the studio. As mentioned, I think that the movie has some laughs in the beginning but ends up dragging by the time it hits the credits. It becomes too much of an action-fest in a film that needed to keep the laughs until the very last words were spoken. Strong job by the leads, but it always felt like it was a missed opportunity.

However, fans should be quite happy by this Shout Factory Blu-ray. The video is strong, and while the audio is far from spectacular, it should serve the purpose. The extras are the best this movie has ever had, easily, with a new commentary and interview with the beautiful leading lady. The dated documentary has some sound issues but is packed with information and video archives. I give this a good recommendation, more so for the fans of the time period and film. Enjoy.

Michael Durr has been reviewing movies for the better part of fifteen years now. He primarily enjoys thrillers, sci-fi, animation and even a little courtroom drama. His favorite films include Escape from New York, the Goonies and anything with Alyssa Milano. When he’s not praising Kurt Russell as the greatest actor of our time or scratching his head over a David Lynch flick, he’s spending time at home in Texas with his lovely wife, Lori and his amazing son. How they put up with him is a mystery, but even Basil Rathbone doesn’t have the time to solve that one.
Bohemian Rhapsody The Americans: The Complete Final Season