Posted in: The Reel World by John Delia on December 3rd, 2018 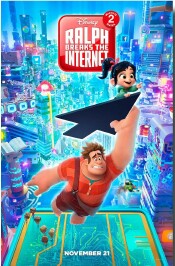 Ralph Breaks the Internet is a sequel to the hit Disney animated film Wreck it Ralph. In Ralph Breaks the Internet, we follow our heroes from the last movie, Ralph and Vanellope, as they travel the internet in search of a broken part for Vanellope’s arcade game. They find the missing steering controller on eBay, and it’s the last one in existence. Up for auction, they give the winning bid for $27,000. They now must find a way to earn the money to pay for the controller with a deadline in five hours, or they will lose Vanellope’s game forever.

Ralph Breaks the Internet is a painfully average film, and compared to its predecessor, a huge disappointment. This sequel wasn’t bad, however, but it wasn’t too great either. There’s one big problem I had with this movie, and it’s Ralph. Ralph in the first movie had already gone through his character arc and was a very well developed character by the end of the film. In this movie it feels like they purposely broke the character just for a story line. Ralph in Ralph Breaks the Internet is now a needy, clingy, and annoying character. Throughout the movie Ralph is constantly holding Vanellope back from doing the things she wants to do to save herself. People who relate to her should start to feel how annoying Ralph can be.

Ralph was not the only problem I had with this movie. There is also a major plot hole that’s impossible to overlook. It doesn’t make sense that Ralph was able to leave his game for over 24 hours without it being infected by a bug. After all, he’s literally the bad guy in the game Fix-It-Felix, Jr., so how come nobody noticed he was missing? It wouldn’t be that bad of a plot hole except for the fact of Ralph being away from his game was the whole conflict in the first movie. You would think the writers and filmmaker would have noticed this, but I guess not.

There is one saving grace in this movie, and it comes in the form of the character Shank. Shank is a well-balanced and action-packed character that I wish we had more of in some of the Disney films. Every scene she’s in is either filled with exciting action or actual good moral advice. I believe she definitely carried the movie for us teen ladies, so go check her out.

The movies moral isn’t anything new; it’s a simple “don’t hold friends back” message. And it’s presented in the most obvious way so you won’t miss it. Maybe I’m being a bit overly affected, but as a teen it felt a little juvenile that the filmmakers had to figure it out for us. But, after all, I’m sure the kiddies are a big part of their ticket buyers and more of their target market.

To wrap things up, the movie was OK, nothing to brag about, and not much teen repeat value.

*Diana is a 14-year-old student at a Boca Raton, Florida, Middle School, and one of her loves is film.

John Delia has been on all sides of the movie business from publicity, writing for publications and on line blogs, script writing, to film making. Writer, critic, film editor he has worked as a film critic on this second go around for 14 years. He earned his Bachelor’s degree at the college of Journalism and Communications at the University of Florida in Gainesville, Florida. John is an active member of the Southeastern Film Critics Association (SEFCA) . Favorite Films: Lord of the Rings/Hobbit trilogies, The Godfather trilogy, the Indiana Jones trilogy (I didn't like the 4th), The Avengers and for TV it's Game of Thrones. As for animation it's a tie between anything Pixar and everything Hayao Miyazaki.
Benji – Off The Leash! (Blu-ray) The Third Murder (Blu-ray)