Posted in: Disc Reviews by Jeremy Butler on December 3rd, 2018 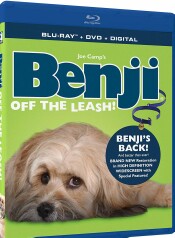 So this was not one of Nalyce’s favorite films to watch, but she was a trooper and watched it till the end. Benji Off the Leash is a digitally remastered telling of the 2004 film. To its credit, the story surprising holds up. Even more to its credit, my daughter was actually able to follow the story. I mean, I had to explain certain parts, like who was Benji? And explain the profession of dog breeding, a profession she automatically decided was a bad job given that to her eyes it broke up puppy families. However, once we cleared that hurdle, we were able to continue the movie. Full disclosure, my knowledge of Benji beforehand was nonexistent. I mean, I knew the name, but not the significance. Fortunately for me, there is a decent opener so that I could catch up.

The story opens up with a news announcement that makers of the Benji films are going across the U.S. looking for the next dog to play the character. We then settle into a Mississippi town and into the lives of a family of dog breeders, headed by Hatchett, who is abusive to both his family as well as the animals under his care as he continues to breed new puppies in order to gain more money, not allowing adequate time between pregnancies.

Through these practices a half-breed pup is born, which he immediately disowns, but his son Colby decides to care for the dog in secret. Meanwhile, two dogcatchers conduct an independent investigation of Hatchett’s practices, all while being taunted by a stray that they are unable to catch.

Needless to say, Nalyce was not a great fan of Hatchett. “Daddy, he’s mean. I don’t like him.” On this we were in agreement. To go further into detail, I found the story to be very intriguing, though I was partial to the storyline involving Colby and his family. The introduction of the Zachariah character was beneficial, but it is very clear that Colby is the heart of this story, and it is watching his struggle under a dictator of a father that resonated with me the most. Nalyce merely resonated with the fact that there was a dog on screen, which as ironically re-sparked the can-we-get-a-dog request just in time for Christmas.

Livingston and Sheldon mainly serve as comic relief for the story, but it keeps the overall story from becoming too serious. Their escapades with the “Lizard Tongue” dog remind me of old Roadrunner Looney Tunes. It gave me a feeling of nostalgia.

As this was a sequel, I had some reservation as I worried that the story would be too difficult to get into, but Benji Off the Leash functions just fine as a standalone. The introduction about the filmmakers searching for a new dog to play Benji helped ease me into the story. It is a kids’ film without question, but I see no reason why adults would not enjoy it as well. I did.

Benji Off the Leash is presented in an aspect ratio of 1.85:1. The 1080p image is arrived at with an AVC MPEG-4 codec at an average of 24 mbps. Over all I found this remastering to be of a very good quality with a more than fair amount detail, especially regarding Benji’s coat. However, there are a few instances of graininess, predominantly visible in the background. I also noticed a slight shimmering on the left side of the screen in the treehouse when Colby brings the puppy to the treehouse.

The DTS-HD Master Audio 7.1 track is clear and concise throughout the duration of the film without any issue. Additionally, the soundtrack and dialog track are mixed well with no instances of clashing. Granted it is rare that the two tracks intersect.

Audio Commentary with Director, Composer, Editor: The film features an audio commentary track with the Director Joe Camp, Producer Margaret Loesch who was actually provided the voiceover at the beginning of the film, and Composer Anthony Di Lorenzo. This was a pretty cool feature, as the production crew provide behind-the-scenes and anecdotal information.

Trailer (2:00): The film features a two-feature to lay out the premise of the story. Given that you have the full the movie. It’s not really useful.

As I mentioned, Nalyce was not a big fan of the film, but I imagine most of that had to do with her disliking Hatchett and the whole dog breeder issue. I myself enjoyed the film very much. I’m normally not much for remastered films, but given that this story was first told back in 2004, it’s not exactly carbon dating.

Jeremy Butler is a film school graduate of the International Academy of Design and Technology. He is been writing for Upcomingdiscs since 2012; however, movies have played a big part of his life for much longer. Favorite genres include horror, science fiction/fantasy, and comedy. Favorite movies are V for Vendetta, Boondocks Saints, Kiss Kiss Bang Bang, and The Godfather.
Holiday Gift Guide Spotlight: Universal Studios Ralph Breaks The Internet