Posted in: Disc Reviews by John Delia on December 20th, 2018 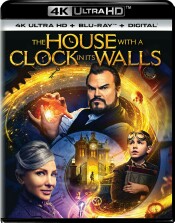 Children’s fairy tales have taken a new drift with the film The House with a Clock in Its Walls.  Packed with exciting action adventure, the movie, based on the book by John Bellairs, envisions the story with an incredible amount of CGI.  You could almost call the film animated, but that’s a good thing here as things go bump in the night, magic forms the basis, and solving the mystery becomes the prominent focus for older youngsters. Orphaned due to a car crash that took his parents, young Lewis Barnavelt (Owen Vaccaro) gets invited to live at his Uncle Jonathan’s (Jack Black) magical mansion. He’s a bit fearful of the old house with its grand stairway and many mysterious rooms, but Lewis sort of likes the flamboyance of the magician-turned-warlock.  There he’s introduced to Jonathan’s neighbor and best friend, Florence Zimmerman (Cate Blanchett), who assures Jonathan that he will enjoy living with his uncle.

Uncle Jonathan has only one rule for Lewis: he mustn’t open a special cupboard, ever.  Things go well for Lewis until it’s time he attend the local middle school.  There he’s the odd man out, as cliques have formed between the boys long before he came there.  Surprises abound in his new life, and when he helps Tarby (Sunny Suljic), one of the school kids running for class president, he feels he’s finally made a friend. But things are not what they seem to be, and it leads to Lewis breaking the one rule he had promised he wouldn’t.

Director Eli Roth moves the plot along at a fast clip, introducing all the main characters and creating a lot of adventure at every turn at the big house.  He takes some of the comedy to the school, showing Lewis’s inability in sports, his awkwardness, and his learning valuable life lessons.  But most of the fun comes with the old mansion and his Uncle Jonathan, who wants Lewis to accept the things he cannot see and believe the things he does see.  Topping off the film with a wild and wacky ending that involves the clock in the wall makes for a lot of enjoyment for youngsters and the young at heart.

In the role of Lewis, Owen Vaccaro gives a very good performance that makes his character work.  He’s wide-eyed from the start, adventurous midway through the film, and in the finale he becomes the brave kid who doesn’t give in or give up to Isaac Izard (Kyle MacLachian), the meanest adversary he would ever face. You may have seen Owen in Daddy’s Home 1 & 2 as Dylan.

Over-the-top as usual, Jack Black puts his best face forward as the madcap magician/warlock Jonathan Barnavelt.  He was ostracized from the family years back because his father did not like him becoming a worthless magician.  After a long run in show business, he achieved the supremacy of a warlock, a male witch.  Spells are his favorite, and a ball of electricity suits him the best for defense. But when it comes to Lewis, he wants to be the father he no longer has.

The film gets a little spooky at times with strange things appearing out of the walls, paintings that change, and the thing behind special doors.  The comedy offsets anything that may be a little scary, and the story gets so engrossing that older kids will enjoy all the magical happenings from start to finish. There’s a massive amount of computer graphics, and the sets are incredible.  I’m quite sure that most families will want the Blu-ray when it comes out, but do not miss this on the biggest and best screen you can find at a local theater.

The House with a Clock in Its Walls has been rated PG by the MPAA for thematic elements including sorcery, some action, scary images, rude humor, and language.  Being that time of the year with Halloween just around the corner, most kids who have seen films like Monsters Inc. or Goosebumps will welcome this wacky adventure.  You may want to show immature children the trailer from the movie so you can gauge their willingness to attend a showing.

The House With A Clock In Its Walls is presented in an aspect ratio of 2.39:1. The ultra-high-definition 2160p  image is arrived at by an HEVC codec with an impressive average bitrate of 65-70 mbps. This is the kind of stylized and lush environment that does well in this format. Of course, it’s basically an upconvert from the 2K digital master of the source material. Colors are outstanding. There’s more than a little warmth to many of the house colors, infusing a bit of yellow and orange to the color temperature. There are many chances for bright and vivid colors to pop. The extended cloths near the film’s beginning exhibit a rainbow of colors. The purple outfits worn by Blanchett’s character also provide vivid color. There’s a lot of texture in the set design, and the 4K gives you enough added detail that you can really relish all of the interesting surfaces and explore a well-designed production. Black levels are deep and rich, and the HDR allows the energy bolts of magic to stand starkly against these black backgrounds.

The Atmos track defaults to a pretty solid 7.1 mix. With all of the crazy things happening, it all provides for a very immersive surround mix that can be quite aggressive at times. Ticking clocks and creatures that go bump in the night fill the sound field. Some things are more subtle, like creaks in the floorboards. There are enough explosive moments that the subs do literally come to life and allow you to feel as well as hear this audio presentation. Dialog always cuts through. The score goes from quiet to manic but never really interferes with the sound. There’s a decidedly Harry Potter feel to the music. The house’s organ has some of the most dynamic depth, and the trouble of restoring a classic organ is truly appreciated here.

Some of the extras are only the Blu-ray copy of the film. The following extras are also on the UHD disc. It’s all in 4K but not HDR.

Deleted Scenes: (9:20) There are nine with optional commentary with Roth and Black. There’s also a handy play-all option to get you through them more smoothly.

Alternate Ending & Alternate Opening: (5:35) This plays much better with the Roth and Black commentary.

These features can only be found on the Blu-ray:

Warlocks And Witches: (9:58) There are four short features on the film’s main characters that run anywhere from 2-3 minutes each. You do have a play-all option.

Movie Magic: (9:53) There are five features under this heading, also with a play-all option. These features provide quick looks at various set pieces. The final one deals with that creepy Jack Black baby puppet.

Tick Tock – Bringing The Story To Life: (3:27) The cast and crew talk about the book and writer and then give us an idea of how the film evolved.

Eli Roth’s Director’s Journals: (7:23) You get six short behind-the-scenes features that are guided by Roth and cover different days of shooting. The features also focus on the different locations used.

Owen Goes Behind The Scenes: (4:11) These are short bits that show the young actor having fun on the set with a camera. There are four with that play-all option once again.

Theme Song Challenge: (2:48) This one hurt my ears. The cast try to come up with a theme song for the film on the spot.

Do You Know Jack Black? :(4:01) The cast participate in a mock game show that uses Jack Black trivia.

Jack Black’s Greatest Fear: (1:27) This feature has Roth and Owen playing a practical joke on Jack Black that involves a goat.

The Mighty Wurlitzer: (2:35) A look at the restored organ used for the film’s score.

A very CGI-jam-packed movie with a LOT of fun things happening. Be cautious when deciding to allow immature children see the film, as it does have some scenes that are inappropriate for youngsters.

John Delia has been on all sides of the movie business from publicity, writing for publications and on line blogs, script writing, to film making. Writer, critic, film editor he has worked as a film critic on this second go around for 14 years. He earned his Bachelor’s degree at the college of Journalism and Communications at the University of Florida in Gainesville, Florida. John is an active member of the Southeastern Film Critics Association (SEFCA) . Favorite Films: Lord of the Rings/Hobbit trilogies, The Godfather trilogy, the Indiana Jones trilogy (I didn't like the 4th), The Avengers and for TV it's Game of Thrones. As for animation it's a tie between anything Pixar and everything Hayao Miyazaki.
Who’s Harry Crumb? (Blu-ray) Silent Rage – Retro VHS Look (Blu-ray)