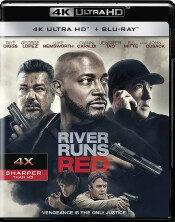 On The Third Day Of Christmas Cinedigm Gives To You:

Cinedigm is offering us River Runs Red on UHD-Blu-ray. That’s 4K for all of our film fans out there. The film stars Taye Diggs as the father of a young man shot by corrupt police officers. When he can’t get justice through the system where he’s a respected judge, he teams up with George Lopez who also lost a son to the same cops. They get their revenge in a bloody confrontation. You can own it in 4K. Be sure you have a 4K television with HDR and a UHD player to enjoy this film.

Gino Sassani is a member of the Southeastern Film Critic's Association (SEFCA). He is a film and television critic based in Tampa, Florida. He's also the Senior Editor here at Upcomingdiscs. Gino started reviewing films in the early 1990's as a segment of his local television show Focus. He's an award-winning recording artist for Omega Records. Gino is currently working on his 8th album Merchants & Mercenaries. Gino took over Upcomingdiscs Dec 1, 2008. He works out of a home theater he calls The Reel World. Favorite films: The Godfather, The Godfather Part II, The Body Snatcher (Val Lewton film with Karloff and Lugosi, not the pod people film), Unforgiven, Gladiator, The Lion King, Jaws, Son Of Frankenstein, The Good, The Bad And The Ugly, and Monsters, Inc.
12 Days Of Christmas Giveaways: Day 2 – Win The Best Of The Three Stooges on DVD From Time-Life Krull – Retro VHS Look (Blu-ray)