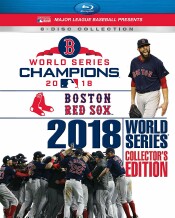 On The Sixth Day Of Christmas Shout Factory Gives To You:

It seems like we’ve been giving away one of these prizes every year for a long time. We have a copy of the complete 2018 World Series Collector’s Edition. It includes all 5 games of the 2018 World Series plus game 4 of the ALDS and game 5 of the ALCS. This is a must-have for Boston Red Sox fans. It’s all on Blu-ray in HD. That’s 22 hours of championship baseball. There’s also always the bonus prize. The single-disc version of this series goes to a person who adds my favorite football team in their answer. One contest. Maybe 2 winners. It’s all thanks to our friends at Shout Factory.

Contest is now closed Winners are Bill Norris for the correct identification of my favorite team. Jae Park wins the big set.

Gino Sassani is a member of the Southeastern Film Critic's Association (SEFCA). He is a film and television critic based in Tampa, Florida. He's also the Senior Editor here at Upcomingdiscs. Gino started reviewing films in the early 1990's as a segment of his local television show Focus. He's an award-winning recording artist for Omega Records. Gino is currently working on his 8th album Merchants & Mercenaries. Gino took over Upcomingdiscs Dec 1, 2008. He works out of a home theater he calls The Reel World. Favorite films: The Godfather, The Godfather Part II, The Body Snatcher (Val Lewton film with Karloff and Lugosi, not the pod people film), Unforgiven, Gladiator, The Lion King, Jaws, Son Of Frankenstein, The Good, The Bad And The Ugly, and Monsters, Inc.
12 Days Of Christmas Giveaways: Day 5 – Win The Great Silence From Film Movement 12 Days Of Christmas Giveaways: Day 7 – Win Hooked on Hollywood: Discoveries from a Lifetime of Film Fandom By Leonard Maltin From Goodknight Books