12 Days Of Christmas Giveaways: Day 7 – Win Hooked on Hollywood: Discoveries from a Lifetime of Film Fandom By Leonard Maltin From Goodknight Books 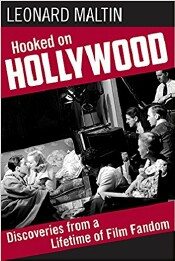 On The Seventh Day Of Christmas Goodknight Books Gives To You:

Hooked On Hollywood by Leonard Maltin. All of us here at Upcomingdiscs love movies. We love them enough to take on the role of film critics. Leonard Maltin is one of those icons that the rest of us look to for inspiration. His reviews, books and articles on Hollywood span over 50 years. his latest book Hooked On Hollywood has two parts. The first half of the book recall some of his favorite old-time Hollywood stories. The second half features his interviews over the years with some of the legends in the business. It’s the kind of book that belongs on the shelf of every film lover. Goodknight Books has been generous enough to provide a copy for us to give away.

Gino Sassani is a member of the Southeastern Film Critic's Association (SEFCA). He is a film and television critic based in Tampa, Florida. He's also the Senior Editor here at Upcomingdiscs. Gino started reviewing films in the early 1990's as a segment of his local television show Focus. He's an award-winning recording artist for Omega Records. Gino is currently working on his 8th album Merchants & Mercenaries. Gino took over Upcomingdiscs Dec 1, 2008. He works out of a home theater he calls The Reel World. Favorite films: The Godfather, The Godfather Part II, The Body Snatcher (Val Lewton film with Karloff and Lugosi, not the pod people film), Unforgiven, Gladiator, The Lion King, Jaws, Son Of Frankenstein, The Good, The Bad And The Ugly, and Monsters, Inc.
12 Days Of Christmas Giveaways: Day 6 – Win 2018 World Series Collector’s Edition From Shout Factory SEFCA (Southeastern Film Critics Association) Announces Their 2018 Film Awards