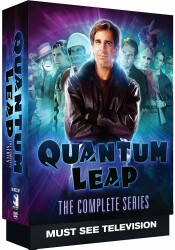 On The Eleventh Day Of Christmas Mill Creek Entertainment Gives To You:

Quantum Leap: The Complete Series on DVD. Before he was Captain Archer on Enterprise and before he was Pride on NCIS, Scott Bakula was Sam on Quantum Leap. He played a scientist who jumped through the past into the bodies of others where he was expected to right some wrong before he could “leap” to another and hopefully home. You get 18 discs containing the entire classic series in one package. It’s all thanks to those wonderful elves over at Mill Creek Entertainment.

Gino Sassani is a member of the Southeastern Film Critic's Association (SEFCA). He is a film and television critic based in Tampa, Florida. He's also the Senior Editor here at Upcomingdiscs. Gino started reviewing films in the early 1990's as a segment of his local television show Focus. He's an award-winning recording artist for Omega Records. Gino is currently working on his 8th album Merchants & Mercenaries. Gino took over Upcomingdiscs Dec 1, 2008. He works out of a home theater he calls The Reel World. Favorite films: The Godfather, The Godfather Part II, The Body Snatcher (Val Lewton film with Karloff and Lugosi, not the pod people film), Unforgiven, Gladiator, The Lion King, Jaws, Son Of Frankenstein, The Good, The Bad And The Ugly, and Monsters, Inc.
Night School (UHD Blu-ray) (4K) 12 Days Of Christmas Giveaways: Day 12 – Win Miami Vice – Season 1 On DVD From Mill Creek Entertainment