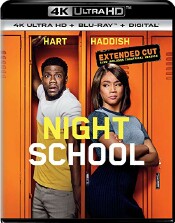 It made all the sense in the world on paper. Pairing Tiffany Haddish (coming off her outrageously profane, scene-stealing breakout in Girls Trip) with Kevin Hart (one of the shrillest most successful comedians in the world) seemed like a match made in loudmouth heaven. Instead, it turns out that almost all the creativity that went into Night School — which actually has a pretty decent premise — was limited to envisioning its two stars on a poster.

Teddy (Hart) is a fast-talking salesman with an impossibly-gorgeous girlfriend named Lisa (Megalyn Echikunwoke). On the night that he proposes to Lisa, Teddy causes an accident at work that costs him his job. As a result, Teddy decides to enroll in night school and earn his GED in order to get a job that pays him well and allows him to keep spoiling the oblivious Lisa, who has no idea Teddy doesn’t have a high school diploma.

But the reason Teddy doesn’t have a high school diploma in the first place is because he has an extreme phobia of exams. (Eventually, Night School fleshes out the cocktail of learning disabilities the otherwise bright Teddy suffers from.) On top of that, former high school nemesis Stewart (Taran Killam) has become a spiteful principal who is determined to block Teddy from earning his GED. Teddy’s best hope is Carrie (Haddish), a no-nonsense teacher who leads the night school classes and sees right through Teddy’s BS.

Despite the presence of some pretty funny people in this cast, some of the movie’s biggest “laughs” revolve around scenes centered on pubic hair in a restaurant, fart jokes, and PG-13 insults. (That being said, this is a review of the slightly longer Unrated Edition of Night School) I don’t really understand the point of pairing Hart and Haddish, but shackling them to PG-13 punchlines. I know that comedy is totally subjective, so I imagine plenty of people find a lot of what I just mentioned hilarious; I respond more to bits like the fact that Killam’s principal is unhealthily obsessed with Morgan Freeman’s character in Lean on Me to the point that he adopts a “black voice.”

The movie is directed by Malcolm D. Lee, who had a major hit with Girls Trip and has also made the well-liked ensemble dramedies The Best Man and The Best Man Holiday. The group of misfits in Teddy’s night school class is honestly the best part of the movie. I particularly enjoyed Romany Malco’s tech-phobic Jaylen (who is obsessed with the idea that robots will replace humans), Mary Lynn Rajskub’s sheltered mom Theresa (who cheerily hides her disdain for her boring domestic life), and Al Madrigal’s Luis (who actually turns out to be a better sparring partner for Hart than Haddish).

Of course, Hart and Haddish are the stars of the show here, but they don’t really spark in the way I hoped for. Things get off to a promising start as the two go toe-to-toe at a traffic light in their first scene together, but it quickly becomes apparent that having two loudmouths go at each other is actually exhausting. That’s why Hart has had his greatest box office success playing off actors who provide a physical counterpoint (The Rock in Central Intelligence) or a temperamental counterpoint (Ice Cube in Ride Along) rather than someone who simply yells back. As for Haddish, she seems oddly and disappointingly underused since Night School is very much Teddy’s story — Hart is also a producer here — and we never see Carrie on her own.

Night School has six (SIX!) credited screenwriters, which is not usually the sign of a coherent vision nor is it typically a recipe for success. What’s especially amazing (not in a good way) is that even with all those cooks in the kitchen, it honestly seems like 60-70% of this movie was riffed/improv-ed/made up on the spot. The result is less an actual movie and more a series of scenes with people trying to out-shout or out-gross each other.

Night School is presented in an aspect ratio of 2.40:1. The ultra-high definition 2160p image is arrived at with an HEVC codec at an average of 64 mbps. The movie features a consistently bright and vibrant palette, courtesy of the pops of color that can be found on the walls and décor of Piedmont High along with the characters’ wardrobes. Flesh tones are pleasingly warm and black levels offer strong separation during the group’s ill-fated heist to swipe a practice exam. That being said, Night School is far from the most visually-daring film you’ll ever see. So while this UHD presentation is actually pretty pristine, it often feels a bit like overkill.

The DTS:X track defaults to a DTS-HD Master Audio 7.1 presentation. Similar to the visual presentation, the muscle on this soundtrack feels a bit much for what really is a dialogue-driven comedy. This is especially true when you consider that stars Kevin Hart and Tiffany Haddish don’t need a state-of-the-art sonic presentation to be heard. This is a well-balanced presentation with very subtle ambient noise in the rears. In fact, the only times the surround sound field comes to life is during the sequences when letters and numbers jump off the page for Teddy when he’s stressed out during an exam. There’s also some solid sub activity for the movie’s big explosion and to punctuate Carrie’s punishing blows when she uses mixed martial arts(?!) to teach Teddy.

You can use the Main Menu to choose between the 116-minute Unrated Extended Cut or the 111-minute Theatrical Version. The director’s commentary is available on both discs.

Gag Reel Extra Credit: (5:17) A lively collection of practically every cast member — not just Hart and Haddish — getting a chance to riff and go crazy with alternate punchlines. Random emojis and text pop up to punctuate certain jokes, which I suppose is what counts for “extra credit.”

Feature Commentary with director Malcolm D. Lee: The director talks about the various versions of the script, which at one point included a romantic connection between Teddy and Carrie. Lee also briefly explores the merits of fart jokes and offers plenty of behind-the-scenes details, such as the fact that Hart refused to shave his facial hair for the opening scenes set during Teddy’s high school days. (The comic is “deathly afraid” of looking like a little boy.) This commentary is only available for the Theatrical Version.

(Features available on the Blu-ray Disc 2)

Alternate Opening: (6:29) This longer intro shows more of Teddy’s hustle during his high school days and establishes his status as a cool kid. The scene was ultimately taken out because it bogged things down way too much. Features optional commentary from director Malcolm D. Lee, who seemed to realize this was going to be cut as they filmed it.

Deleted Scenes: (13:27) There are six scenes total, including an ill-fated bit with Teddy getting his eyebrows blown off that Lee admits was botched on a technical level. Features a Play All function and optional director’s commentary.

Gag Reel: (11:04) A longer version of the “Extra Credit” gag reel, but minus the random text and emojis.

Night School’s In Session!: (13:33) A “Roll Call” for the movie’s major characters that serves as a series of micro-featurettes for each cast member. Features a Play All option

Who’s the Student? Who’s the Teacher?: (2:33) The comics lightly roast each other as they talk about their first big movie face off.

Prom Night Revisited: (3:07) Cast and crew break down the sequence where the night school misfits crash their high school’s prom. The best part here is that we get see pictures of the actors on their real-life prom nights. (Hart was actually prom king, while Taran Killam and his date dressed as Star Wars characters.)

Making of the Dance Battle: (3:45) We learn that Haddish was far easier to teach than Hart for their characters’ climactic dance battle.

Game Over: (1:46) Spotlight on the great Yvonne Orji’s underused character Maya, who dislikes Teddy and doesn’t think he is worthy of her best friend Lisa. (I mean…she’s not wrong.)

Like a bright student who doesn’t put in the work and ultimately underachieves in the classroom, Night School simply doesn’t live up to its potential

The movie did just fine at the box office — $102 million worldwide on a $29 million budget — but it failed to live up to its billing as a clash of comedy titans. At least this UHD disc from Universal boasts a decent set of special features and an overqualified A/V presentation.