Dogs on the Job 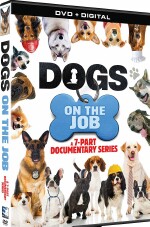 “They are working. They have been working for us for over 10,000 years. They have been called man’s best friend. Soft fur and wet nose. Smart and loyal. Aiding us in transportation, hunting, companionship, protection, and many more ways. They share a bond with us like no other animal. They are career dogs, and this is a look into the history, training, and duties: jobs that can only be filled by our four-legged friends.”

Dogs on the Job is a seven-part series that takes a closer look at the various breeds of dog and the kinds of jobs they were bred to perform. The first episode gives us a pretty good lesson on how dogs became to be associated with humans and why those early wolves would become so cooperative with humans. It’s pretty clear that as much as we have directed the evolution of the canine from the wolf to what it is today, these animals have also altered our evolution in many ways. It’s safe to say that neither would exist today in their present form if not for each other. Each episode after the first takes a look at two kinds of dogs or job specialization. Experts in those fields offer up their information, and there’s footage of the dogs pretty much doing their stuff. If I have a complaint at all, it might be that there’s not enough of the dogs and more than enough talking heads. Of course, can there ever be too much footage of dogs?

Here’s a list of the six episodes following the pilot and the kinds of things you’ll find in each.

Dogs Move Into The Stage And Stadium: The first focus is on dogs that have been trained to entertain us. We’re talking famous dogs like Lassie, Rin Tin Tin, and Benji. There’s a nice little history of dogs in films, and we learn a little about how they get to be big stars. What makes a good film dog? The second part of the episode deals with the various dog competitions that go on around the world. From showing dogs to athletic games, dogs are out there trying to be the best in some form or another.

Herding And Mushing: I own a Siberian Husky named Aurora, and this was the episode I was waiting for. We get to see how dogs are trained to pull sleds, both in competition and for real transportation over the northern wastelands of ice and snow. The second part deals with herding dogs. We get to see just how that looks, and apparently there are herding competitions.

The Nose Will Get The Job Done: Dogs that are trained for search and rescue start this episode off and running. Dogs use their noses to find people and expose drugs and explosives for military and police units. From law enforcement we move to the hunting dog, who has to be trained not only to find game but retrieve it and deliver it to the hunter in one piece.

Police And Military: There is some overlap here from the previous episode. This one gets far more detailed about the training and bond the dogs and their handlers go through. These dogs not only do things with their nose but can detain a criminal when he’s hiding from the police.

Dogs Helping People Live Normal Lives: Of course, one of the oldest jobs for dogs in the modern era is the seeing eye dog. This piece looks at many ways dogs are used to provide help and comfort. We see dogs used as therapy dogs and also used to help autistic children.

Protection And Companionship: Long-time readers of this site know who Baby was. She was a German Shepherd/Chow mix who ran security here. She also wrote a few reviews. She was the very definition of a protection dog, and she was greatly missed when the last hurricane passed through and we were without power for four days. Huskies are great dogs, but in a dangerous situation they are just as scared as you are and require you to assure them. The dogs shown here are trained to be aggressive on command but still be safe around a family. The final part tells us what we already know: life is better when you have a dog.

Dog lovers won’t really learn anything new here. It’ll just confirm the things we already know. If you’re a dog lover to be, this one just might push you over the edge. It’s a simple release. There’s just one disc and no extras. It’s got to be enough to see “a dog’s life on display”.

Gino Sassani is a member of the Southeastern Film Critic's Association (SEFCA). He is a film and television critic based in Tampa, Florida. He's also the Senior Editor here at Upcomingdiscs. Gino started reviewing films in the early 1990's as a segment of his local television show Focus. He's an award-winning recording artist for Omega Records. Gino is currently working on his 8th album Merchants & Mercenaries. Gino took over Upcomingdiscs Dec 1, 2008. He works out of a home theater he calls The Reel World. Favorite films: The Godfather, The Godfather Part II, The Body Snatcher (Val Lewton film with Karloff and Lugosi, not the pod people film), Unforgiven, Gladiator, The Lion King, Jaws, Son Of Frankenstein, The Good, The Bad And The Ugly, and Monsters, Inc.
Family Guy’s 20 Greatest Hits Secret Stories of Hitler