Posted in: No Huddle by Brent Lorentson on January 31st, 2019 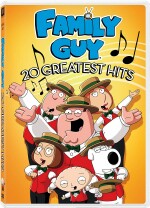 Family Guy has reached a level of impact upon the American pop culture where I believe the characters need little to no introduction.  Is there anyone really that doesn’t recognize Stewie? After all, he’s reached the status of icon and has even become a fixture of the Thanksgiving parade as one of the many floats.  Where The Flintstones, then later The Simpsons were at one time the dominating animated family on the television tackling day to day struggles of the modern American (each in their own and unique way), Family Guy (love it or hate it) now seems to be the go-to animated family.

Coming on the heels of the DVD release of the sixteenth season, Fox has released Family Guy: 20 Greatest Hits.  With well over 300 episodes, I can imagine it must’ve been a daunting task to put together this collection of episodes.  There are plenty of classic episodes in the lineup, but I have to be honest; I felt there were a few episodes I didn’t agree with that were included. But for those who may have never seen the show or just caught an episode and can’t understand the big deal is about the show, this is the DVD set that will bring you into the fold.

One of the things that sticks out about the collection of episodes in this set is that it has just about every popular musical number the show has done. From Peter’s touchdown musical number “Shipoopi” to “A Bag of Weed” and numerous other songs, without a doubt there are going to be a few musical numbers that will ignite a fit of laughs.

While watching the DVD, one thing I noticed was that the show has shown a little more restraint over the years.  Granted the DVD is uncensored, so the language isn’t bleeped, but even the subject matter had more of an edge, and I didn’t realize how much I missed that edge till revisiting some of these episodes.  In “PTV” we see Peter take on the FCC. This is something we saw South Park do, but honestly I enjoyed the way Family Guy tackled it better.  Basically the episode has Peter start up his own cable network and has shows about what he wants, and then the FCC interferes.  This is one of those episodes where the writers did a great job at making a statement while not beating the audience over the head with the message, but most importantly they kept it funny.

In the episode “Sibling Rivalry”, Stewie faces off with his most formidable foe, Bertram, his half-brother, in fight for control over the playground.  This is one of my all-time favorite episodes that keeps me laughing after countless viewings.  Not only is the feud between Stewie and Bertram entertaining; there’s Peter going through the process of getting a vasectomy (a barbershop quartet musical number being involved), then there is also Peter getting Lois fat for sexual reasons; really, this episode is just packed with some over-the-top humor.  Another one of my personal favorite episodes, “I Dream of Jesus” is in this collection, though I understand if people get annoyed with this one due to Peter’s obsession with the song “Surfin Bird” that you will hear quite a few times over the duration of the episode.  In this episode Peter comes across Jesus in a used record store, and the two develop an amusing relationship that of course goes awry.  The set also includes one of the shows most innovative episodes “Road to the Multiverse”, where Stewie and Brian go on an adventure through various universes that exist at the same time. Here we get to see the show take on numerous styles and directions.

Granted, I know I may be in the minority, but I just wasn’t a fan of a few episodes.“Road to the North Pole” is one of my least favorite episodes, but the stinker for me is “Brian Sings and Swings”.  This is the episode where Brian decides to be a lounge singer with Frank Sinatra Jr. and over the course of the episode becomes an out of control drinker.  It’s not the subject matter I have the issue with, I just really didn’t think this was top-twenty episode material.

One of the fun things about this collection is that is has lyric videos where you can sing-a-long with the characters while also including the Music Machine option where it will simply play the musical number you’ll want to watch.  After watching all these episodes, there are a few songs that have stuck with me, and I’ve been caught humming some of these tunes over the past couple days.  While this set isn’t perfect it’s definitely worth a purchase if you’re a fan of the series, easily this is the set I’ll be reaching for when I need my Family Guy fix.

Brent Lorentson is a horror writer and film critic based out of Tampa, Florida. With a BA in Digital Film, he co-wrote and co-directed Scavenger Hunt. His short stories have appeared in various horror anthologies. In 2019 his short script Fertile Blood will be a part of the anthology horror film Slumber Party. He is currently working on his first novel A Dark and Secret Place set to be released in late 2019. Favorite Films: Taxi Driver, Fight Club, I Saw the Devil, The Wild Bunch, Dawn of the Dead, A Clockwork Orange, Pulp Fiction, Heathers, The Monster Squad, and High Fidelity.
Trail of Tears Collection Dogs on the Job