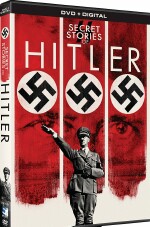 “If the human features of Hitler are lacking in the image of him that is passed on to posterity, if he is dehumanized and shown only as the devil, any future Hitler may not be recognized simply because he is a human being.”

We have become so removed in time and experience from the evils of Nazi Germany that the entire experience has been cheapened. When politicians call another politician a Nazi or compare them with Hitler, it’s absolute proof that they have no idea of what they’re talking about. It shows a complete absence of understanding to compare any person or party in modern day America with the brutality and genocide that was the reality of Nazi Germany. Mill Creek has put together a collection of documentaries that everyone should see for themselves. You can’t watch these historically tragic incidents and ever again think the comparison applies to even the worst American politician. We keep saying that we should never forget. But it’s obvious that we’ve already forgotten. Here’s a timely reminder.

Hitler has been dead for almost 100 years. Few people alive have ever met him. Still, he has become the very embodiment of evil. Once a popular first name, almost no one names their child Adolph anymore. His trademark paintbrush mustache, originally trimmed during WWI so that he could get an effective seal on his gas mask, is strictly forbidden around the world except in spoof. His birth has been the speculation of time-travel discussions ever since. You know the question. Would you kill baby Hitler if you could go back in time? It even ended up a small plot point on the recent Deadpool film. And so he will always have an impact on our society. In a way I think the man himself would be a bit happy about that.

The collection begins with a rather controversial documentary called Swastika. It was released in 1974 when a cache of home movies was uncovered that were from Eva Braun’s private collection. There’s no narration. The viewer is intended to think about what he sees for himself. At times dialog is created by using lip readers to translate some of what is being said in these silent films.

The film was immediately a source of controversy. The filmmakers were accused of trying to humanize Hitler, and honestly, that’s exactly what these films do. But as the above passage indicates, we must humanize the man. We have to remember that he was simply a man who had the same kinds of experiences as the rest of us. He was loved and he loved. If evil isn’t allowed to have a human face, then how can we ever spot the next truly evil person when he’s going to look like the rest of us? The film makes it clear from the start that Hitler was an evil man, and yet it has been misunderstood for decades and banned outright in Israel.

These are mostly home movies that show Hitler in a relaxed pose, usually at his Eagle’s Nest retreat. These are often candid moments where he might be smiling and even playful. It’s not all home movies. Some of this is propaganda material that was shown when Hitler would make appearances at often somber occasions. One rather haunting scene shows him patting a crying girl at a memorial service. I can’t explain why, but it stands out to me as the most chilling scene in the film. There’s footage that shows Hitler’s plans for the great capitol and footage of the Hindenburg disaster.

Extras on this disc include a 30-minute discussion among the filmmakers. There’s a BBC interview with surviving members of Hitler’s inner circle from 1973. There are some propaganda news reels and a look at the German color technology of the time.

This is a six-part documentary that begins with Hitler’s first failed attempt to take power and his subsequent prison sentence. This is where he wrote his infamous Mein Kampf. The documentary shows us where Hitler learned from his mistakes and rose to the powerful position he finally attained without the street violence that marked his first attempt. He learned to use the system and the dissatisfaction of Germans with the struggles that remained from the treaty that ended the first world war. It’s narrated by Matt Shaw, and he isn’t very dynamic. He comes across like a college lecture that might cure any of his students’ insomnia. It reminds me of those old filmstrip narrations where you waited for a beep to advance to the next frame. I’m showing my age a bit here.

The episodes follow pretty much year by year. The flow is actually pretty smooth and offers us a glimpse into the Hitler before his rise to power. But if you’re looking for any “secrets stories” here, you’re going to be disappointed. It’s all material you likely heard from your high school history teacher, if he was as good as yours truly.

This is a three-part series on Germany’s infamous U-boats. We get the history of submarine warfare beginning with the first world war. This is the weakest of the three parts of this collection. It comes out more like it’s focused for people who have studied this particular subject as part of their life’s work. There’s not much about Hitler here, and it feels too much like filler.

Those who forget history are doomed to repeat it. It’s a common phrase with just a little ring of truth. I prefer Mark Twain’s version that history doesn’t repeat itself, but it rhymes. Whatever the version one chooses to believe, there is little doubt that mistakes of the past must be studied in order to avoid them in the future. Hitler was a force of nature, and it’s unlikely anything could have been done to keep him from coming to power. What should have been learned is how to deal with this kind of leader from an international point of view. Appeasement doesn’t work with a madman. If we can take that lesson forward, a future genocide might be avoided. This is history. Often raw and unedited. “What you are about to see is authentic material shot in Nazi Germany.”

Gino Sassani is a member of the Southeastern Film Critic's Association (SEFCA). He is a film and television critic based in Tampa, Florida. He's also the Senior Editor here at Upcomingdiscs. Gino started reviewing films in the early 1990's as a segment of his local television show Focus. He's an award-winning recording artist for Omega Records. Gino is currently working on his 8th album Merchants & Mercenaries. Gino took over Upcomingdiscs Dec 1, 2008. He works out of a home theater he calls The Reel World. Favorite films: The Godfather, The Godfather Part II, The Body Snatcher (Val Lewton film with Karloff and Lugosi, not the pod people film), Unforgiven, Gladiator, The Lion King, Jaws, Son Of Frankenstein, The Good, The Bad And The Ugly, and Monsters, Inc.
Dogs on the Job The Night Is Short, Walk On Girl (Blu-Ray)