The Night Is Short, Walk On Girl (Blu-Ray)

Posted in: Disc Reviews by Michael Durr on February 1st, 2019 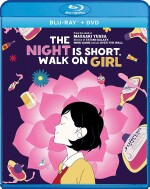 I have had many story ideas in my head for quite sometime.  Putting them on paper is indeed another thing.  One such story is a road trip between some friends that starts out normally, but little by little it becomes unraveled until it represents a tremendous and crazy affair.  Unfortunately, I only got through nine chapters, and it hasn’t seen a word since.  Today’s review is focused on an anime that is named The Night is Short, Walk On Girl.  It involves the story of a girl who starts a normal night drinking through town.  However, little by little the people and events around her become more extraordinary and bizarre as the night carries on.  Hopefully this one makes it well past the ninth chapter.

We visit a restaurant. A girl with black hair is drinking with her friends.  She stares endlessly into a bowl of soup until it turns into a bunch of eyeballs, and then we hear a train whistle.  The girl wishes to be out on the town instead of watching time pass.  The scene moves to another table where we meet Senpai, a teenager obsessed with the girl with black hair.  The School Executive Festival Head (who also apparently cross-dresses when the mood suits him) confronts Senpai with this accusation, but he denies it.

But Senpai is obsessed.  He’s so obsessed that he’s spent every waking moment trying to “run into” the girl at every turn.  This is what he has referred to as phase one.  Phase two will be the moment when he can actually sit with her.   Another friend at the table, Don Underwear (who hasn’t changed his underwear in a very long time) proclaims that to be not romantic as he continues to wolf down some food.

Soon, the girl with black hair departs from her friends and heads outside to another bar.  There she orders a pina colada and other drinks  as well.  This continues until a gentleman, Todo-san, notices her at the bar and then talks to her about the many different types of alcohol, including one named Imitation Denki Bran.  Meanwhile Senpai, who has also made his way outside, is being kidnapped and then thrown into a black bag.

Back at the bar, Todo-san tells the girl that she reminds him of his daughter.  He then gets a little handsy with a certain part of the girl’s upper torso, which earns a very friendly punch to his face.  The girl finds two more people, Higuchi and Hanuki, at the bar, who are appreciative of her actions towards the pervert.  Apparently, they enjoy their time crashing other parties and getting free drinks.  So the girl with the black hair decides to join them, and they go to the next party.

It is here, however, that the girl with black hair hears about a 60th birthday party, which seems a perfect way to enjoy even more alcohol for free.  When she gets there, the topic of Imitation Denki Bran is brought up again.  It appears that there is a place where she can get this special brew.  However, it involves her going on a boat owned by a very old man.  This night is just beginning, and it won’t end anytime soon.

Most of the story is spent with the girl going from locale to locale and getting involved deeper and deeper into the events around her.  Senpai plays a prominent role as he tries to win over the girl of his dreams.  The story has such an interesting concept, and it really picks up once we hit what is known as the Used Book Market.  The characters, particularly the Girl, Higuchi, and Hanuki, are fun to watch with their interactions and provide much of the charm present through the film.

Also, why did Senpai lose his underwear again?  This is never really explained; he gets kidnapped, loses his underwear, and it seems more like an excuse for a couple of plot points than any real story progression.  I should want these two to get together by the end of the film; instead I’m wishing the girl would just go find another alcoholic drink or used book market to pursue.

The film is shown in a 1.77:1 widescreen picture.  The animated world of Night is Short is gorgeous and has an exorbitant amount of detail.  Despite the flaws in the story itself, it is hard to find fault with any of the visuals in the movie.  Scenes stand out in your mind long after you have seen them; the used book market scene is the best example, where the picture is alive and full of bits here and there to drool over.

The fantasy/despair scenes greatly complement the main picture in such a way that is not jarring and enhance the visual spectacle.  Once in a while, you may see a crude line or some facet of the environment that might not make a whole lot of sense, but these are minor distractions from this very alive picture.

The audio tracks is a  DTS HD 5.1 track in Japanese. English and French subtitles are provided.  The dialog is flowing; there was never a problem on screen with who was talking and the various changes in the speech patterns.  Even at low volume, there was no problem with clarity, and the subtitles were well in sync with the ongoing action.

There are a few environmental surrounds here for the viewer to enjoy.  Most of the background is dominated with a flirty score soundtrack that seems to linger in the air and make the movie that much more enjoyable.  Without it, I think the film would have been much duller and not have the popping beat as it moves from scene to scene.

Interview with Masaaki Yuasa 6:35 : Masaaki sits and takes us through with how the film came to be and working with his crew.  He also explains how he adapted the novel and the changes he made during production.  Finally, he goes into one of his other projects named The Tatami Galaxy and how it is a parallel world to the environment of Night is Short.

The disc thankfully is a video and audio masterpiece.  Every piece of scenery, every backdrop, every tidbit of sound is beautifully done.  It is worth watching if you enjoy beautiful animes.  The extras are bare minimum, but I think a lot of people will enjoy the movie even if my comments I admit come out as a bit prudish (but the creep factor is real, I assure you).  Enjoy.

Michael Durr has been reviewing movies for the better part of fifteen years now. He primarily enjoys thrillers, sci-fi, animation and even a little courtroom drama. His favorite films include Escape from New York, the Goonies and anything with Alyssa Milano. When he’s not praising Kurt Russell as the greatest actor of our time or scratching his head over a David Lynch flick, he’s spending time at home in Texas with his lovely wife, Lori and his amazing son. How they put up with him is a mystery, but even Basil Rathbone doesn’t have the time to solve that one.
Secret Stories of Hitler The Shield – The Complete Series (Blu-ray)