Posted in: No Huddle by Brent Lorentson on February 7th, 2019 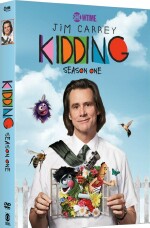 “Every pain needs a name.”

Despite taking several cues from Mister Rogers’ Neighborhood, the new Showtime series Kidding couldn’t be any further from the children’s TV show millions of kids grew up with.  Instead, what Kidding offers is a front row seat where we see a man who embodies all that is wholesome, kind and optimistic dissolve into something that is emotionally broken as his sanity and life crumble around him.  Kidding isn’t simply a dark comedy, but instead is the start of a man’s journey when he is confronted by tragedy and shown just how cruel the world around him is.  While the show isn’t a complete romp of doom and gloom over its ten-episode first season, it still should be made clear this show is not for kids.

It’s kind of hard to believe it was way back in 2004 when we last saw Jim Carrey and Michel Gondry collaborate on Eternal Sunshine of the Spotless Mind.  For me that was the last great film we’ve gotten to see Carrey in, and I was starting to wonder if we’d ever get to see him work his magic again.  When I first heard about Kidding, I have to admit I was a little underwhelmed, but I was hopeful that Gondry would be able to revive the Jim Carrey who audiences have been missing out on for so long. As it turns out, the wait was worth it.

Jeff (Carrey) is the host of a successful children’s television show where he plays Mr. Pickles, where over his thirty year run he’s been teaching kids how to be good.  For Jeff, though, this isn’t just an act; this is a genuine lifestyle he leads, but unfortunately he is struck by tragedy, and this is where the show picks up.  Jeff loses his child in a tragic car accident, and the fallout from the accident has managed to tear his family apart.  Jeff refuses to let the tragedy take its toll as he continues to grin and bear the loss of his child on his own terms, but as bad luck continues to follow him, it picks away at his sanity till finally it all becomes too much for him.  Early on in the season the interactions between Jeff and Jill (Judy Greer) are sad and awkward, but that’s part of what grounds the show despite its moments where it loses sense of reality.

What Carrey has pulled off with this role is impressive and is easily one of his better performances over the span of his career (I doubt he’ll ever top Andy Kaufman).  This isn’t a role where we are watching Carrey go over the top and act like a goof; instead, this is a much more subdued performance where it’s the subtlety of the performance that shines.

Helping maintain the over-100-million-dollar empire is Jeff’s father, Seb (Frank Langella), who couldn’t be any more different than his son and at times seems to be more worried about the show’s future than about his son.  Not that Seb is a bad guy; he just seems to be a realist who wants to keep the show afloat at all costs.  Also working at the show is Jeff’s sister Deirdre (Catherine Keener), who is the designer of all the puppets.  She too is having her family fall apart after she discovers that her husband may be gay.  All these situations are set up early in the show, and as we watch it unfold it definitely goes into some strange yet hilarious situations.

I know a lot of what I’ve said about the show has described it as a very somber affair, and to be fair, it does manage to get darker as the season progresses, BUT this show has moments that are so sweet and charming that it makes it all worth it.  For instance, when we see Mr. Pickles visit with a young boy who is suffering from a brain tumor, this interaction can’t help but warm the heart and remind us just how good a person Jeff is despite all that is happening around him.  Another sweet moment comes in episode 6, where we see Jeff put on a mini-performance of his show for someone who is dying of cancer.  There is more to this moment that makes it all the more special, but I don’t want to spoil it for anyone.  One of the show’s funniest moments also takes place in this episode; all I’ll say is it involves Jeff’s interaction with a parakeet.

The weakness of this show though falls on the storyline about Jeff’s other son, Will (Cole Allen), who seems to be acting out more since his twin brother passed away.  I don’t know if it’s just the casting of the character or the writing, but I really could not get on board with liking this character or even sympathizing with him.  Sure, there might be a couple amusing moments involving him, but for the most part his angst simply deflates the momentum of the show.

Despite being created by Dave Holstein, who was a contributing writer for the hit series Weeds, Kidding is flooded by Gondry’s influence, and that is not a bad thing.  As the season progresses, we get to see how some of the visuals go more off the rails, and with the show’s over-the-op nature towards the end,I can safely say there isn’t anything else like it on television.  Where the last episode leaves us, I’m excited to see what happens next.

Brent Lorentson is a horror writer and film critic based out of Tampa, Florida. With a BA in Digital Film, he co-wrote and co-directed Scavenger Hunt. His short stories have appeared in various horror anthologies. In 2019 his short script Fertile Blood will be a part of the anthology horror film Slumber Party. He is currently working on his first novel A Dark and Secret Place set to be released in late 2019. Favorite Films: Taxi Driver, Fight Club, I Saw the Devil, The Wild Bunch, Dawn of the Dead, A Clockwork Orange, Pulp Fiction, Heathers, The Monster Squad, and High Fidelity.
The Game: The Complete Series Dr. Seuss’ The Grinch (UHD Blu-ray) (4K)