Posted in: Disc Reviews by Gino Sassani on February 7th, 2019 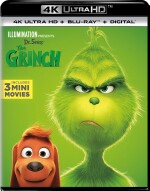 Bigger is not always better, and more is not always better. If the holiday season release of Dr. Seuss’s The Grinch is a testament to anything, it is that those two ideas are absolutely true. The Grinch has everything that the 1966 How The Grinch Stole Christmas could never have hoped to have had. The film delivers on some of the best computer-generated animation that Hollywood studio money can buy. It had a $75-million budget. It will get a wide release with millions of more dollars put into a global marketing campaign. And it will make a ton of money. After all, the Grinch is the modern age Scrooge from Dickens’ classic story. These are the kind of stories that are timeless and popular. Still, there’s one thing this film doesn’t have over the 1966 television short, and that is that its heart is two sizes too small.

We all know the story. The Grinch (Cumberbatch) lives high atop Mount Crumpet. He’s a rather grouchy old soul, and he lives in isolation from the Whos, who live appropriately enough down in Whoville. He lives alone with his dog Max, who is the model of man’s… Grinch’s best friend. He manages to tolerate the bright and happy Whos from a distance except when Christmas rolls around every year. It is then that the singing and celebration get entirely out of control. So imagine his surprise when he discovers that the mayor has issued a decree to make Christmas three times bigger. For the Grinch, that can only mean three times louder. So he devises a plan to steal Christmas from the happy citizens and assure himself a nice and peaceful December 25th.

Meanwhile down in Whoville we meet Little Cindy Lou Who (Seely), who lives alone with her hard-working mother Donna Who (Jones). She has unselfishly decided to seek out Santa Claus and make an important request. She doesn’t want more toys. She wants Santa to find a way to take the strain off of her mother. She conspires with her gang of friends to set a trap and capture Santa Claus so that she can make her plea in person.

It’s obvious from very early along that these two schemes were going to collide at some point in the film, and indeed they do. Cindy Lou Who captures the Grinch, and her heartfelt plea begins to thaw the freeze that has been around the Grinch’s heart.

I have to admit I always hoped that Benedict Cumberbatch would bring his considerable talents to a Who story. Unfortunately, I was thinking less of a Dr. Seuss story than a different kind of Doctor. I didn’t quite expect him to live in a frozen castle, but rather in a police call box. Cumberbatch certainly attempts to bring great emotion to the character, and at times he truly does. Still, he’s fighting a script with too many holes that takes too many easy outs to reach for the heart.

The narration is provided by Pharrell Williams, who has a wonderful voice, but it’s often too cheerful. He also has no sense of the timing for the Dr. Seuss method of phrasing a line, and it stands out badly throughout. It was a huge distraction as he read familiar lines, but without that iconic phrasing. I found myself correcting him too often in my head. And that’s with the classic stuff. The writers took it upon themselves to “improve” on the words of Dr. Seuss and added much more of their own story and even rewrote the traditional lines. It wasn’t but ten minutes into the movie that I was thinking about how I might get in touch with Colin Clive. Clive, you see played Dr. Frankenstein in the Universal 1931 classic film, and his major accomplishment was to bring Boris Karloff back to life. All I can say is we need Boris Karloff more than ever before. Karloff had the cadence just right, and the emotion he put into the words still move me over 50 years later. This film will never be remembered so long.

The film features some of the classic music, but You’re A Mean One, Mr. Grinch is given an urban, almost rap style. The Who Christmas Carol is still very much the same, and it shines as one of the few reminders of a 50-year old classic.

The Grinch is presented in an aspect ratio of 2.39:1. The ultra-high-definition 2160p  image is arrived at by an HEVC codec with an impressive average bitrate of 65-70 mbps. Obviously green is going to be dominant, and the 4K ultra-high-definition image presentation does show off the remarkable work on the title character. It’s not just the solid color. It’s the texture and all of that attention to fur details and fur movement. It’s a vivid and colorful film all around with rich almost comic-book colors. The HDR really shines when you see Christmas lights shining against a dark background. It’s actually kind of mesmerizing. Black levels are solid. From an image point of view, this couldn’t look much better.

The Atmos track defaults to a reasonable 7.1 mix. Dialog is going to be front and center. Remember, we have a narrator here, and that’s what is intended to dominate. The film has a rather whimsical collection of musical bits that provide the more dynamic aspects of the audio presentation. The surrounds are mostly there for the manic and zany scenes that populate the film. The subs add a nice dimension to both music and dialog even if they don’t pop out at you like you might expect more in an action film.

From Green To Screen: (6:19) Cast and crew talk about the original iconic source material and their efforts to translate it into a more 3D computer animation world. There’s a little history of the character and on casting Cumberbatch.

Illuminating The Grinch: (4:55) Here you continue to see and hear about converting the original designs. We get to see early animation tests. There’s also a look at the new character of Fred, who was created for the film.

Who’s Who In Who-Ville: This is an interactive feature where you can explore aspects of the film’s characters from profiles to progression reels.

My Earliest Grinch Memories: (2:45)  The cast and crew talk about the childhood memories of discovering the Grinch. Surprisingly no one mentions Karloff, although there are slight references to the classic television special.

Grinchy Gadgets: (3:21) Take a look at the various Bond-like gadgets the Grinch uses in the film.

Music Videos: There are two: You’re A Mean One Mr. Grinch and I Am The Grinch.

Anyone Can Draw: You get lessons in drawing The Grinch, Max, and Fred.

X-Mas Across The World: (2:20) I hate when people use the X-Mas thing, but what are you going to do. This is a quick look at various cultures and their Christmas traditions.

Cindy Lou’s Yule Log: (8:02) This is about the most useless extra I’ve encountered. It’s an animated hearth that throws in a few Grinch quotes and quick appearances.

Each year on the Eve

each Eve I would see

that horrible Grinch with my eyes all a-glee.

Voiced by a creature

by a monster I swear

but for 26 minutes, I would have not a care.

He still holds my attention

though I’ve seen him before

but with every new viewing I see so much more.

Now he’s part of the season

as is that star that shone bright

and for whatever reason no one else gets it right.

for there’s great money at play

but my Grinch’s heart grew three sizes that day.

where there’s no reason to go

wouldn’t touch this new Grinch “With a 39 and a half-foot pole”.

Gino Sassani is a member of the Southeastern Film Critic's Association (SEFCA). He is a film and television critic based in Tampa, Florida. He's also the Senior Editor here at Upcomingdiscs. Gino started reviewing films in the early 1990's as a segment of his local television show Focus. He's an award-winning recording artist for Omega Records. Gino is currently working on his 8th album Merchants & Mercenaries. Gino took over Upcomingdiscs Dec 1, 2008. He works out of a home theater he calls The Reel World. Favorite films: The Godfather, The Godfather Part II, The Body Snatcher (Val Lewton film with Karloff and Lugosi, not the pod people film), Unforgiven, Gladiator, The Lion King, Jaws, Son Of Frankenstein, The Good, The Bad And The Ugly, and Monsters, Inc.
Kidding: Season One The Old Man And The Gun (Blu-ray)