The Game: The Complete Series

Posted in: No Huddle by Archive Authors on February 7th, 2019 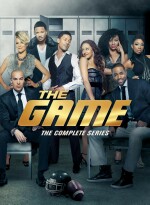 Stemming from a backdoor pilot episode within the series Girlfriends, The Game is a comedy series about a woman (played by Tia Mowry Hardict) who gave up her career as a doctor in light of the success of her boyfriend’s being a star athlete (this is the first pang of misogyny, with more to come). The CW cancelled the series after the third season, and it was picked up by BET for it’s remaining years. The show was an absolute hit for a while and managed to score well with fans of Girlfriends. It was like getting an extra nine seasons of that show.

Most of the male lead characters in this show are current or former members of a fictional professional football team called the San Diego Sabers. In fact, most of them seem to have been cut from the team for one reason or another but coast day to day on their fame and burn through their riches. The first few episodes do siphon some comedy from this situation when the character Derwin Davis (played by Pooch Hall, which is a perfect name for a baseball player…but that has nothing to do with anything) has to sell off his cars and home and learns the true cost of all things he used to buy while abiding with the “baller’s code.” Suddenly a $900 bottle of champagne is no longer casually sent to friends’ tables at the bar.

I can’t exactly tell what this series is truly about; either seeing intelligent young women be trod upon, or successful young men receiving little to no comeuppance for their arrogance. The first case study is the aforementioned doctor who becomes a homemaker because her boyfriend (who has cheated on her and purposefully puppeteers her attempt to start a new job) is on a professional football team. She keeps reminding him of this fact, but there seems to be no real payoff for such reminders.

The second and grossest example is when Jason Pitts (played by Coby Bell) goes on a egotistical rant that causes a bartender to lose her job. Does he try to rectify this? Sure, he finds the bartender on the street and then offers to take her to a cheap restaurant as an apology. Such a cheap stunt surely warrants a slap in the face, doesn’t it? Apparently not. Instead we get a sudden cut to the next scene, where we see the couple in Mexico just after they got married. That’s right. An egomaniac costs a woman her job, and his reward is he wins her heart. I’d be weeping if this weren’t grounds for fits of screaming laughter at the show’s expense.

Speaking of hysterics, I have to hand it to whichever writer decided to name the bartender “Chardonnay.” That is pure comic gold that the other characters do not hesitate to acknowledge. I’m kind of hoping it’s not a nod to the fact that singer/actress Brandy portrays said bartender, thus making it a drink pun…because that makes it feel not as clever.

CBS has delivered a fine complete series collection. The series ran from 2006 until 2015, and you get all 147 episodes plus the backdoor pilot episode from Girlfriends as a bonus. That’s 20 discs and over 50 hours of content. You also get a gag reel, commentaries on select episodes, deleted scenes, and cast and crew interviews. CBS puts it all in one place. “That’s what I call the complete package, yes sir.”