Posted in: The Reel World by Jeremy Butler on February 8th, 2019 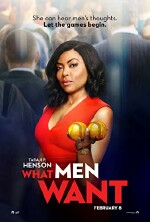 “With great power comes a responsibility to tell the truth.”

What do men want? For some it is money and fame; for others it may be power or prestige. However, for a majority I believe it is the love of a good woman. This debate is at the heart of the What Men Want, the Tariji P. Henson-led romantic comedy this guaranteed to have all the ladies running to the box office this weekend. I’m sure the title of this film sounds quite familiar, as it serves as a polar opposite to the 2000 Mel Gibson-led What Woman Want. Basically a rehashed plot and modernized from the female perspective, I expected the film to grow stale quite quickly, but despite my assumptions, I remained entertained the entire run of the movie, and that is due to charismatic performance of Henson and her chemistry with her love interest, the talented Aldis Hodge of Leverage fame.

Henson plays Ali Davis, a successful and driven sports agent, determined to break into the self-described boys club of her career. After being passed over for a promotion despite being worthy of it, she decides to make herself undeniable for the position by signing the biggest potential free agent joining the NBA draft. Aiding her in this endeavor is her right-hand man, her assistant Brandon (Josh Brener, The Internship). In order to sign this prospect, though, she will have to contend with his eccentric father (Tracy Morgan, The Last O.G.)

Her first attempt does not go too well; however, Ali receives a bit of divine assistance after a meeting with a psychic, and a mishap while partying results in her gaining the ability to hear men’s inner thoughts. Armed with this new talent, it leads her closer to the career that she has always dreamed of and even brings a love interest (Aldis Hodge) into her life. But hearing the thoughts of every man comes with a price, and if she is not careful, she is going to end up burned.

So as I stated earlier, this is a bit of a rehash of already established idea. Then again, original ideas these days are hard to come by. The film does serve as the perfect counterbalance of the 2000 original film, giving a voice to the female side of the coin nearly 20 years later, thereby diversifying the market. If you were fan of the television series Girlfriends, you are likely to enjoy the film. The movie is filled with woman empowerment, while the male characters, particularly their thoughts, have them appearing a bit one-dimensional. Fortunately, the film has the good sense to use this to their advantage by addressing it during a conversation between the love interests, thereby adding depth that had not previously been there. In the mind of our lead, all men want is to get paid and laid, but it is actually Hodge who challenges this ideal and forces Henson to change her opinion and afterwards open her eyes.

The film does run a bit long with the addition of a subplot involving a wedding that Henson’s character is involved in, but all this angle really does is pull focus away from the more entertaining narrative. I honestly believe that the film would be fine without this perspective, which only becomes of any real significance during the movie’s climax. It is really the chemistry of Henson and Hodge that keep with the movie from becoming stale and provides a great deal of laughs via physical comedy. I mean very physical comedy.

A good film in its own right and has the potential to gain box office success, but given the competition this weekend, it is unlikely to win the box office. That aside, those within the target audience are likely to enjoy the film immensely. I am far from the audience, but as you have read, still found it to be entertaining and have no issue recommending it to others.

Jeremy Butler is a film school graduate of the International Academy of Design and Technology. He is been writing for Upcomingdiscs since 2012; however, movies have played a big part of his life for much longer. Favorite genres include horror, science fiction/fantasy, and comedy. Favorite movies are V for Vendetta, Boondocks Saints, Kiss Kiss Bang Bang, and The Godfather.
The Old Man And The Gun (Blu-ray) Sarah T: Portrait of a Teenage Alcoholic (Blu-ray)