Posted in: Disc Reviews by Michael Durr on February 8th, 2019 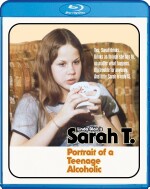 As with probably most people in this business, I am indeed addicted to the concept of collecting movies.  It should probably come as no surprise that I have well over 1,000 movies in all disc-based formats.  Anybody with a rational mind should question why I have to own all the movies in a given series.  Yes, I own Darkman 3, Hollow Man 2, and Bloodsport 4, among other strange and utterly awful movies.  But somehow despite that completion-ist mindset, my addictions and OCDs pale in comparison to a deadly drug such as alcohol, a drug that can overtake your life and kill you in an instant.  Our review today takes us to a TV movie from the 70’s named Sarah T: Portrait of a Teenage Alcoholic.

We start with an upbeat commercial showing a bunch of teenagers having fun with a Courey’s Beer.  Then we get some cold hard facts from the time period.  There are 500,000 pre-teen and teenage alcoholics.  Three in four teenagers have had a drink, 1 in 20 have a serious problem with alcohol, 1 in 10 of those people will become an alcoholic.  But it certainly makes you popular and easygoing with your friends, or at least that’s what they say, anyway.

Sarah Travis (played by Linda Blair) is an alcoholic.  Our first scene takes us to a party hosted by Sarah’s mother, Jean (played by Verna Bloom) and her stepdad, Matt Hodges (played by William Daniels).  Sarah walks through the party and talks to the various people in the party.  Bored, she offers to take her sister’s baby upstairs so she can change him.

However, she’s not allowed to stay up there very long, as she has to go downstairs to meet Mr. Peterson (played by the great M. Emmet Walsh), who is the new boss of her stepdad.  Mr. Peterson tells her that she should go on a date with his son, Ken (later played by Mark Hamill).  He then decides everybody should have a drink, including Sarah.  However, Sarah’s mother says she can only have a ginger ale.

Mr. Peterson pours his drink and then takes a good swig before placing it down and going off to talk to the others.   Sarah makes sure nobody is looking and quickly picks it up and puts it on her tray.  She then goes to the kitchen, and as soon as the help leaves, she decides to drink the half-full glass of alcohol.  It’s harsh at first, but then Sarah starts to enjoy the taste.

The next morning, Sarah doesn’t feel like eating and goes to school.  She tries hard to make friends but continually finds it very difficult.  She tries out for the glee club and actually sings pretty well, but her voice isn’t quite there.  The teenager is cut off quickly and told that she should go ahead and try again, next semester.

She tries calling her real dad, Richard (later played by Larry Hagman) but can only get his voice mail.  After not leaving a message, she decides to call the liquor store, and with a little finesse and fooling, she is able to get the delivery person to leave the alcohol.  The drink of choice?  Some vodka and red cherry wine.  As Sarah enjoys her drink, she starts descending into a dark world from which she might never return.

The rest of the film is spent following Sarah as she descends into that dark world and trying to find her way out.  Linda Blair does an excellent job of playing a troubled teen, and the supporting cast is diverse and brings a lot to the table.  I thoroughly enjoyed seeing a young Mark Hamill show off some young acting chops before he became the legendary Luke Skywalker and amazing voice actor.  Yes, M. Emmet Walsh and Larry Hagman really aren’t acting as much as being themselves, but it was a good symmetry of characters.

What bears some explaining here is the message of the film.  A lot of people will make fun of this, as it is a dated TV movie, full of things that simply don’t happen anymore due to little things called laws and regulations.  However, as this 80’s child will tell you, this was a very real world growing up.  Liquor was freely accessible, and my parents had a liquor cabinet with no lock (and left alone all of the time).  I’m lucky I did not like the taste of alcohol (still don’t to this very day), because I was given a glass of wine as early as the age of thirteen.

But it was commonplace for liquor stores to deliver alcohol to a paying minor (the same thing with cigarettes), and the scenarios in the movie spoke to how alcohol flowed freely and anybody with a little cash could over indulge in the consumption.  I cringed as I watched some of the scenes, as I had watched many of my college friends fall right into the same issues that Sarah T did here.  Only she did it at a much scarier age.

The film is shown in a 1.33:1 fullscreen picture.  Initially when I first got this movie, I was very concerned that I was going to be watching some grainy, washed-out affair with no attempts at preservation.  I was gratefully very wrong in that assumption.  Whoever preserved this picture and whatever team or people helped with the restoration deserve raises immediately.

The picture is bright, beautiful, and speaks greatly to the time period it is from.  The modest budget sees a tremendous amount of detail, right down to the labels on the liquor and alcohol that Sarah T is drinking.  When you aren’t looking at the labels from her vodka and cherry wine, the scenery also does a great job of giving us plenty of locations to look at, as our teenager goes often to many odd places in order to find her fix.

There is some issue with black crush for the night time scenes.  When Sarah T rides the horse in the latter parts of the film, she unfortunately becomes a floating head in the thick of the night.  It happens to Mark Hamill’s character in the same scenes as well.  However, these are more the exceptions than anything else.  By and large, this is probably the best restoration of a television movie this old I have seen in quite sometime.

The audio track is a simple DTS-HD 2.0 mono track in English. Not quite as good as the video, this audio track certainly shines in all of the right spots.  Dialog is clear, crisp, and never gets lost, even in the midst of a song that takes us to the next scene.  The sound effects are usually pretty simple, as they might include the clinking of a bottle  or the running of a shower, but they are easily decipherable.  Sure, there are no surrounds to speak of, but it’s fairly basic in the audio department and does the job that’s necessary.  English subtitles are provided.

Linda B on Sarah T 16:53 :  This recent interview has Linda Blair, our female star talk about her film career at the time and how she went from Exorcist to Airport ’75 and then departed for a while to do TV movies such as Born Innocent and this picture.  She had a feeling of being told what to do when all she wanted to know was when she was going to study how to be a veterinarian.  She talks about being self-taught when it comes to acting until she had to do these monologues.  Then she sought help from others, including the director, Richard Donner.  She also got help from fellow star Mark Hamill, which was interesting for her since she was romantically with Rick Springfield at the time.

Richard D. and David L: Portrait of a TV Movie 19:30 : This interview is also recent and has the director Richard Donner and producer David Levinson talking about the movie.  They talk about how David came to Richard with the idea of the movie.  What’s interesting is that David himself had struggles with alcoholism, but it was Donner’s good reputation with children that really secured his role as director.  They continue with talking about how they shot certain scenes and the research they undertook.  This included going to an AA meeting and using the same speech they heard (from a 10-year-old child) to be later used in the film itself.  As with the Linda Blair interview, lots of good information; just needed more of it.

Photo Gallery 4:01 :  Lots of different photographs here.  Some in black and white, some in color, some posters, some lobby cards and ads.  It ends with pages from the script as we close out the extras.

Interestingly enough, about two years after this film came out, Linda Blair was arrested for cocaine possession.  Although she has consistently worked over the years, this single incident probably kept her away from a lot of big roles.  Along with her work in the Exorcist movies and being the founder of the Linda Blair World Heart Foundation for Animal Rights, this movie represents one of her crowning achievements.  She brilliantly shows a teenager involved in the throws of addiction and then fighting to get herself out of that debilitating situation.  The supporting cast is equally strong, and the film does a great job of being tough without coming off as a hokey picture.

The video and audio restoration effort by Shout Factory is top-notch here with the over-40-year-old production being in fine form.  The extras are kinda thin but still very rewarding and full of interesting information.  This film is a product of its times when access to alcohol was more plentiful and even the youngest children had easy access to a liquor cabinet.  However, any kid or parent who is struggling with addiction of themselves or a family member might find some too-close-to-reality scenes in this film that they can relate to.  An important film and one that I did not expect to have such an impact.  Enjoy.

Special Note – Please, if you know of anybody in your family with an addiction, alcohol, drugs, whatever, urge them to get help.  If you are that person, please think of your loved ones.  They want you there to see tomorrow, and the addictions you have will only overtake you in the end.  Please get help and take care of yourself.

Michael Durr has been reviewing movies for the better part of fifteen years now. He primarily enjoys thrillers, sci-fi, animation and even a little courtroom drama. His favorite films include Escape from New York, the Goonies and anything with Alyssa Milano. When he’s not praising Kurt Russell as the greatest actor of our time or scratching his head over a David Lynch flick, he’s spending time at home in Texas with his lovely wife, Lori and his amazing son. How they put up with him is a mystery, but even Basil Rathbone doesn’t have the time to solve that one.
What Men Want The Golem (2018)