The Old Man And The Gun (Blu-ray)

Posted in: Disc Reviews by Brent Lorentson on February 8th, 2019 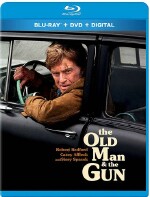 When Robert Redford first announced that The Old Man and the Gun was going to be the last film he was going to be acting in, it became a film that shot to the top of my must-see list.  Since that announcement he’s backed off on his comment, but if this were his last film, this would be one heck of a way to close out an amazing career. What writer and director David Lowery has delivered here is sort of a love letter to all of Redford’s greatest hits, and by the time the credits end, well, you simply know you’ve watched something special.  It’s a film from another era, when special FX didn’t come out of a camera and cinema just was different.  Most of all this film reminded me why Redford will always remain a cinematic icon, but what was missing here is the void Paul Newman left behind.  This would have been a perfect film for them to both be in and ride off into the sunset together, and it’s a reminder of how many greats we have lost and those other greats who may not have passed, but it seems Hollywood just doesn’t seem to have a place for anymore.

The film is mostly a true story based on the criminal Forrest Tucker (Redford), who has spent his life in and out of prison. He’s been incarcerated 18 times, and each of those times he’s managed to find a way to escape.  But the film isn’t about his entire life, but instead about when his criminal life may be coming to an end.  When he meets Jewel (Sissy Spacek), he’s actually on the run after a bank heist, and he pulls over on the highway to help her when he sees her car is broken down.  Of course it seems this is just a tactic to throw the cops off his tail, but the more he talks with Jewe,l you can’t be sure if that twinkle in his eye is part of the con or if he is sweet on the woman.

As their relationship develops over the course of the film, Redford and Spacek have this wonderful chemistry that make it fun to just sit back and enjoy watching these two do what they do best.  You want Tucker to decide to finally hang his hat on his criminal life and simply enjoy living out his years with Jewel on her farm, but you just know that Forrest simply loves what he does and enjoys every minute of it.  Tucker has spent his later years as part of a gang called the Over the Hill Gang, which includes Teddy (Danny Glover) and Waller (Tom Waits). They’ve been doing numerous heists across several states and have virtually gone unnoticed till John Hunt (Casey Affleck) discovers the crime spree taking place.  One of my favorite moments is earlier in the film when Hunt is at the bank with his daughter and it is robbed right under his nose.

What follows is a fun little cat-and-mouse game between Tucker and Hunt, but what’s unfortunate is that we don’t get to see the two play off one another much.  There is a fun scene where they are in the bathroom together and they share a moment of fun banter, but sadly we don’t get enough of this.  If I had any major complaints, it’s that the film is simply too short, it left me wanting so much more as the credits rolled.

It’s a very lean 93 minutes, and there really is nothing that needed to be trimmed from this film. I wouldn’t be surprised if this got a nomination for best film editing.  What is also incredible is the cinematography from Joe Anderson.  The film seems to be actually shot on film, and it definitely has a nice dated look to it that helps it feel like it’s from another era.  There are many nods to several of Redford’s hits from over the years. There is a great montage of the numerous escapes Tucker has pulled over the years that even gives a heavy-handed wink to these older films.  It’s this kind of blending that shapes this film into what it is. David Lowery has done a great job with this picture that embraces the wonderful filmography Robert Redford has amassed over the years.  Is this a swan song to Redford’s career, or will there be more to come?  Well, only time will tell, but if it turns out this is his last, what a way to go out.

The Old Man & the Gun is presented in the aspect ratio 2.39:1.  The 1080p image is arrived at with an AVC MPEG-4 codec that runs with an average of 36 mbps.  This is one of the more current examples of how shooting on film can set a tone and bring a film to life.  Sure, it may be shot on 16mm, but the natural grain and the stock of film not only helps  fit this film into the time period it was aiming for but also helps it fit in with the classic Redford films we’ve grown to love.  Blue seems to be the color that sticks out the most in this presentation, and the film has a nice overall warmth to it.  When it gets to some of the night shots or low-light shots, there is some detail that is lost, but personally, I felt it worked for this kind of film.  One of the details that also comes through is the age and lines of these characters, though I wouldn’t necessarily say this is a bad thing.  Some detail is lost in the wider shots, but again it’s nothing distracting or missed, for the style the film was aiming for, everything looks on point.

The DTS-HD Master Audio 5.1 track is simple and a problem-free track. If you are looking for a bass-booming experience, well, this isn’t the film for you.  The surround experience really is only utilized in a few scenes with cars passing by or the occasional sirens, but really this is a subdued experience.  The score sounds great with this rendering and the dialog is clean and clear throughout, which is one of the more important elements.

Commentary director David Lowery: Usually when you only have one person in charge of the commentary there is a good chance you’ll be experiencing some quiet moments and possibly a boring track; that is not the case here.  Lowery keeps a nice rhythm with this track, filling it with information about the production and film goers should find entertaining.

Everything Else We Shot: (9:10) A collection of scenes that were removed from the film that play together without the option to pick and choose.  Nothing groundbreaking here, but any footage you have of Redford and this cast is definitely worth checking out.

Prison Cats: (2:53) Basically this is a scene shot at the prison where we see the character played by Tom Waits learning to use the machinery with footage of cats  that are in the area.

On Filmmaking: (12:50) A conversation between Lowery and Redford discussing the film and the value of Sundance.

31 Wake-ups: (6:34) Behind-the-scenes footage of a few different scenes and locations from the film.

Joining the Hunt: (3:15) A brief interview with the real John Hunt discussing the characters and his involvement on the film.

This is still one of my favorite films from 2018.  Sure, there have been hundreds of heist films, but it’s the characters that make or break a film, and it’s the cast of characters here that stand out.  Redford is charming and disarming here, reminding us why he is the legend in the industry that he is.  This is a fun film that will keep you smiling and rooting for the (not so) bad guy.  It may not have been a runaway hit at the box office, but the re-watchability factor of this film is high for me.

Brent Lorentson is a horror writer and film critic based out of Tampa, Florida. With a BA in Digital Film, he co-wrote and co-directed Scavenger Hunt. His short stories have appeared in various horror anthologies. In 2019 his short script Fertile Blood will be a part of the anthology horror film Slumber Party. He is currently working on his first novel A Dark and Secret Place set to be released in late 2019. Favorite Films: Taxi Driver, Fight Club, I Saw the Devil, The Wild Bunch, Dawn of the Dead, A Clockwork Orange, Pulp Fiction, Heathers, The Monster Squad, and High Fidelity.
Dr. Seuss’ The Grinch (UHD Blu-ray) (4K) What Men Want