Posted in: The Reel World by Gino Sassani on February 16th, 2019 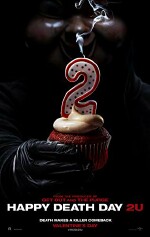 “The math is right. Something else must be wrong.”

Remember math class back when you were in grade school? Yeah, I know. Talk about your horror and nightmares. There used to be this thing called a Venn diagram. I imagine it was named after a guy named Venn. The idea was you had two circles. Inside the circles you had stuff. There were the things in circle A, the things in circle B, and then there were the things in a shaded area where the circles intersected like the Olympic rings. That’s the only way I can really describe the experience I had watching Happy Death Day 2 U. I had not seen the first film, so I borrowed a copy and watched it literally hours before I attended the screening for the new movie. I thought it was shaving things a bit close, but it turned out to be the most fortunate circumstances that could have happened. It doesn’t matter how many times you’ve seen Happy Death Day. You need to watch these films as closely together as you can, because this isn’t a sequel, it’s a lateral move to another angle. And these two films are intersecting like crazy. These would have been Venn’s kind of movies.

Happy Death Day was Scream meets Groundhog Day. Tree Gelbman, played by Jessica Rothe, finds herself stuck in a twisted kind of timeloop that ends when she is murdered by a killer in a college mascot’s baby-face mask. Each time she dies, the day resets, and she’s the only one who carries the memory of the earlier versions. Eventually she solves the necessary puzzle, and we never quite know why the day kept repeating and she didn’t just stay dead. You won’t be five minutes into Happy Death Day 2 U when we start to find out where the timeloop came from, and it didn’t have anything to do with the killer or some supernatural force guiding anyone’s actions. Happy Death Day 2 U is Scream meets Back To The Future.

The new movie starts with a new timeloop beginning. This time it’s Ryan Phan, played by Phi Vu, who begins to experience the returning day. Ryan was a small character in the first movie. He was Carter’s (Broussard) roommate who kept barging in at the beginning of Tree’s loop. Now he’s one of the central characters. His loop is happening during Tree’s loop, and it’s all because of a quantum mechanics thesis project that Ryan’s involved with. They created a machine that caused the loops. Now things have gotten worse. It has spilled over to an alternate universe, and now Tree is in a world where everything is different. The killer in her old loop is no longer the killer, but a friend. Carter is seeing the suck-up sorority witch Danielle (Matthews), so now she’s back to square one trying to figure out who’s trying to kill her now. Meanwhile Ryan’s own geek squad is trying to figure out a way to finally close the loop and repair the hole in the universes. That means Tree could go home, but she’s in conflict. In this world she doesn’t have Carter, but her mother is still alive. Going back means having Carter and losing her mother all over again. The conflict plays out under the requisite story of timeloops and unknown baby-face-mask killers.

Most of the cast returns here. The little quick appearances of the tree-hugger girl, the sprinkler couple, and the falling bottle of beer on the wall get reproduced here brilliantly. It’s also awesome to see a smaller character from the earlier work become so prominent. Phi Vu is so good here you’ll wonder why he was such a throwaway punchline before. It almost doesn’t seem fair. But here’s the catch. It works because he was such an expendable character before that Vu has a chance to really shine here. That small connection ends up pulling these films together nicely. It’s not Jessica Rothe that brings it all home. Yeah, she’s good here and works her way back up to front and center as the movie progresses, but it’s Vu who makes it all click.

This film won’t stand on its own. In a bit of a filmmaking twist, it’s not intended to do so. The other film is playing out all around us, and like Back To The Future, one of the fun games you can play is to notice the subtle changes in the new universe. You get to relive the first film from different perspectives than you did the first time. It had to be nerve-wracking to reproduce those moments from the earlier effort and to do it quite flawlessly. Without a real dedication to detail between the movies, this could have gotten ugly very quickly. But because of the clever way it all plays out, the two films become much better than the sum of the films on their own. It’s meant to be played out as a single piece, and you will re-watch the first film again and get an entirely different experience out of it once you’ve seen this one. It gets confusing, and you really have to suspend your disbelief to its breaking point, but the reward is having a better time than I expected to have. Originality is an endangered species in Hollywood, but once in a while something comes along and winks at you in just the right distorted way that you start to see the ripples in the surface of the mirror. And everyone knows that means you’ve been invited to Wonderland. I don’t quite know if this is what director Christopher Landon had in mind from the start; it would almost be too cool if he didn’t and make it that much more impressive. Stick around for a stinger that sets up the third film. I just hope they can continue this nice web of stories. It would be cool to have a trilogy that just has to be watched together. The local theater marathons already sound like fun.

Look. In the end it’s a campy horror/sci-fi/comedy intended to offer a couple of hours entertainment. We’re not seeing cinema re-invented here. “That doesn’t make it meaningless, does it?”

Gino Sassani is a member of the Southeastern Film Critic's Association (SEFCA). He is a film and television critic based in Tampa, Florida. He's also the Senior Editor here at Upcomingdiscs. Gino started reviewing films in the early 1990's as a segment of his local television show Focus. He's an award-winning recording artist for Omega Records. Gino is currently working on his 8th album Merchants & Mercenaries. Gino took over Upcomingdiscs Dec 1, 2008. He works out of a home theater he calls The Reel World. Favorite films: The Godfather, The Godfather Part II, The Body Snatcher (Val Lewton film with Karloff and Lugosi, not the pod people film), Unforgiven, Gladiator, The Lion King, Jaws, Son Of Frankenstein, The Good, The Bad And The Ugly, and Monsters, Inc.
Widows (UHD Blu-ray) (4K) Exclusive Interview With Kirk Taylor Of Revival!