Posted in: Disc Reviews by Gino Sassani on February 15th, 2019 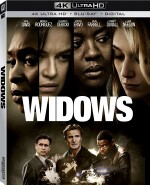 Steve McQueen has established himself as a rather talented director. 12 Years A Slave was one of the better films of 2013 and one of the few times I happened to agree with the Oscars’ choice for Best Picture. When he tackled the heist format, I expected something unique, and I wasn’t at all disappointed. McQueen managed to put a clever spin on a tired genre and provide us with a superior and inspired cast. It wasn’t all completely his idea, of course. The film is based on a Canadian miniseries that goes back to the 1980’s. That doesn’t mean he hasn’t found a way to imprint the material with his own style and bold choices. There’s a lot to love about Widows, but I have pretty low expectations for this film at the box office. More on that later. Let’s get down to it, shall we?

Harry Rawlings (Neeson) is a career criminal. His wife Veronica (Davis) knows where the money comes from, but she’s willing to feign a great deal of ignorance to the fact, because she has become used to the comfortable style in which they live. But it all comes crumbling down when Harry’s latest heist appears to go horribly wrong and Harry perishes in an explosive encounter with the police along with his entire crew. Now Veronica is feeling the grief that comes with the death of a spouse, but there’s more to deal with than that. The man Harry and his crew took down was a gangster by the name of Jamal Manning (Henry), who has taken a dip into politics. He’s going up against the corrupt Jack Mulligan (Farrell), who is running to take his father’s alderman seat. Manning’s $2 million war chest was Harry’s target, and the money appears to have been destroyed in the explosion that took down the crew. Now Manning has gone to Veronica and has given her one month to refund his money.

Veronica is given access to a safe deposit box left to her by Harry. In the box she discovers his notebook where he carefully detailed all of his jobs … including his next target. She decides to get Manning’s money and a whole lot more by putting together her own crew and following through on Harry’s unfinished job. Where will she find a crew? She blackmails the widows of Harry’s crew members by threatening to rat them out to Manning if they don’t work with her to pull off the job.  The new crew includes Linda (Rodriguez), who has a daughter and thinks she owns a clothing store. That is until she finds out it was opened with mob money and they’ve come to shut her down. Alice (Debicki) has been abused by her husband, and now her mother convinces her to turn to high-end prostitution to maintain a living. Talk about your low self-esteem. The heist is on, but it’s going to be touch and go.

There’s a very compelling story going on in the film’s political arena. This is Chicago, and corruption and politics are the same word. The cast here is truly standout. Robert Duvall shows that he still has it as the Mulligan patriarch and retiring alderman. He sees his family as a political dynasty, and his son Jack, played by Colin Farrell, has his own ideas of how the city should be run. Together they share few but dynamic scenes. Brian Tyree Henry also puts in a very strong performance as the street hoodlum who is running against Mulligan.

The only trouble is that this political angle to the heist film format is the strongest leg of the film and perhaps its weakest link. The country just went through a brutal political cycle. And I’m not even talking about the hostility and polarization as much as the political fatigue of endless robot calls and wall-to-wall ads on radio, television, internet, and streets. The film is a solid one, but I question the timing of the subject matter. A few weeks earlier or six months later and the film would have had a chance to show its stuff. I’m not sure how much of a chance it will have right now. Hopefully McQueen’s reputation will be enough to carry the day.

Widows is presented in an aspect ratio of 2.39:1. The ultra-high-definition 2160p  image is arrived at by an HEVC codec with an average bitrate of 55-60 mbps. I was very conflicted about this ultra-high-definition image presentation. I’m so grateful that this was shot on film. That automatically provided some nice advantages here. That means a native 4K source, and the film was so much more organic, and that feeds well into the Chicago character of the film and the kinds of locations and feelings McQueen tries so hard to deliver. But I’m not at all in love with aspects of the cinematography. The lighting is brutally harsh, and it splashes the image at times, badly. A great example is early in the film when Davis is just dealing with Harry’s loss. She’s trying not to cry in front of a mirror and by a window. The harsh white light creates a horrible shimmering line outline. Lamps in darkness don’t get that great HDR contrast. Instead the lights glare unevenly and steal much of the atmosphere here. The colors and detail are often quite good, but most of that happens in low light. Black levels, however, are only fair, and this one is merely a slight upgrade from the Blu-ray, I’m sorry to report.

The Atmos track defaults to a relatively simple 7.1 mix. This is a dialog-first film, and here the release does manage to shine. There’s a nice fullness to the sound that makes it all dramatic, and this adds to the superior cast of the film and their nuanced deliveries. There are a couple of explosions, and the subs rip up your home theatre just like they are supposed to. The score is a bit too percussive for me and too often stands out more as a distraction than complement. Fortunately, it never intrudes on dialog and other sounds. The surround speakers aren’t aggressive for the most part, and that actually helps keep this a more intimate film than it appears on the surface.

The extra is found only on the Blu-ray in an effort to preserve the film’s bitrate on the UHD disc.

Widows Unmasked – A Chicago Story: (52:10) This is a three-part behind-the-scenes feature with three distinctive areas: story, production and locations. There’s a play-all option. This is one of the better behind-the-scenes features. The cast and crew offer up their usual, but there’s nothing frantic or hyped about the pieces. Everyone is rather calm, reserved, and actually providing a ton of useful information instead of the usual love-fest. Yes, they’re talking up the film, but in a much more useful way. It goes across the board to all of the participants.

The film throws some pretty good twists, and McQueen manages to hold your attention the entire time. That’s a significant advantage, because the film clocks in at about 130 minutes. None of it’s wasted, and the film is helped by some of the finest editing you’ll encounter this year. It’s ambitious and just short of a masterpiece. But timing is sometimes everything. “Here’s where I should probably say something reassuring.”

Gino Sassani is a member of the Southeastern Film Critic's Association (SEFCA). He is a film and television critic based in Tampa, Florida. He's also the Senior Editor here at Upcomingdiscs. Gino started reviewing films in the early 1990's as a segment of his local television show Focus. He's an award-winning recording artist for Omega Records. Gino is currently working on his 8th album Merchants & Mercenaries. Gino took over Upcomingdiscs Dec 1, 2008. He works out of a home theater he calls The Reel World. Favorite films: The Godfather, The Godfather Part II, The Body Snatcher (Val Lewton film with Karloff and Lugosi, not the pod people film), Unforgiven, Gladiator, The Lion King, Jaws, Son Of Frankenstein, The Good, The Bad And The Ugly, and Monsters, Inc.
Aircraft Carrier: Guardian Of The Seas (UHD Blu-ray) (4K) Happy Death Day 2U