Posted in: No Huddle by Jeremy Butler on February 20th, 2019 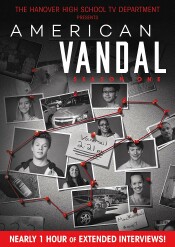 American Vandal is a mockumentary series that premiered on Netflix back in 2017. For those unfamiliar with the term “mockumentary,” it is a parody film or television series in the format of a documentary. This particular series is a parody of the Netflix series Making a Murderer and a investigative podcast called Serial. American Vandal has been on my radar for quite some time thanks to a friend of mine that sang its praise for weeks, trying to convince me of the show’s merit. My buddy’s recommendation had me intrigued, but as you can imagine my queue of media content is a long one, and I was waiting for inspiration to strike to push the series to the front of the queue (thank you, Upcomingdiscs). First thing I did after watching the series is call up my friend and let him deliver his “I told you so” speech.

The series follows two student investigative reporters, Peter Maldonado and Sam Ecklund, as they begin to investigate an act of vandalism that left 27 faculty cars defaced with phallic images. Following the incident, class clown Dylan Maxwell is quickly deemed to be responsible and promptly expelled. Dylan is a notorious prankster, and his prior history of drawing phallic images makes his guilt a forgone conclusion. However, as Peter and Sam begin to examine the evidence more closely, Dylan’s culpability becomes less clear.

Continuing to follow the inconsistencies, our junior reporters turn up new suspects, including teachers with plenty of reasons to want Dylan gone. As their investigation deepens and spreads across the school like wildfire, their popularity grows, which causes one of them to lose sight of their initial goal and results in a rift between the partners. Is their friendship strong enough to withstand their investigation? Is Dylan innocent? And if so, who framed him? These are just a number of questions that are realized in this eight-episode series.

Like I said earlier, I now realize that it was a mistake to push this series to the back of my queue. I had to endure a ten-minute rant from my friend as a result. This is definitely a show of some significance and worthy of the subsequent cult following. Its authenticity to the dynamics and social norms of high school took me right back, from the cliques to how compelling growing popularity can cloud your thinking. The characters’ takes on life as each person drives or motives are based on relatable circumstances, which becomes very clear in the final two episodes.

Additionally, I was drawn into the mystery element of it all, causing me to engage in a bit of a whodunit mentality; every episode I caught myself amending my theory as to who was responsible for the crime. It’s worth noting that my theory of who was responsible for the phallic incident was way off. As this is a parody series, the show does a great job of not taking itself too seriously and infuses subtle comedy into its proceedings. I literally burst out laughing watching Dylan explain the importance of including “ball hair” in his phallic depictions.

Notable episodes include the introductory episode, “Hard Facts: Vandalism and Vulgarity,” as it sets the stage for the series, as well as plants the first seeds of doubt regarding Dylan’s guilt. Episode 2, “A Limp Alibi,” is also noteworthy, as the eyewitness testimony, by far the most compelling evidence of Dylan’s guilt, is called into question. This was a well-balanced episode, as it does a good job of providing enough reasonable doubt for Dylan without fully exonerating him. And finally episode 8, “Clean Up,” clears a lot of things up, but there remain a few more twists and turns, and though you will walk away with the answers you seek, it’s also clear that solving the mystery does not solve all the problems; it actually creates a few more.

Though the series is widely available on Netflix, this home media discs allows for the mystery to be shared with a wider audience, something that I highly recommend. It wouldn’t surprise me that watching Season One inspires a couple of people to sign up for Netflix in order to binge Season 2, which is now available. I’m watching it now, and it is just as good as Season 1.

Jeremy Butler is a film school graduate of the International Academy of Design and Technology. He is been writing for Upcomingdiscs since 2012; however, movies have played a big part of his life for much longer. Favorite genres include horror, science fiction/fantasy, and comedy. Favorite movies are V for Vendetta, Boondocks Saints, Kiss Kiss Bang Bang, and The Godfather.
Exclusive Interview With Kirk Taylor Of Revival! Alita Battle Angel