Posted in: The Reel World by Jeremy Butler on February 20th, 2019 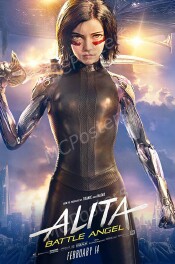 If you look at the box office rankings for last week, you will undoubtably see Alita: Battle Angel occupying the number one slot, and with good reason. I know what you are thinking: last week is being heralded as one of the worst box office performances for a Presidents’ Day weekend, but that does not damper my opinion of the film. Though it took a second for me to gain traction with the series, as I was unfamiliar with the original source material, I found myself treated to a unique action-packed experience. Alita is unquestionably one of the top action films of 2019. I know it’s early, but I have no reason to doubt that my claim will be just as true as the year continues. I would have liked it a bit more if they expanded on the universe slightly more, but it was still a solid opening for the inevitable franchise.

By the year 2563, the world has been ravaged by a catastrophic war known as “The Fall,” dividing the population, high-born members of society reside in a sky city known as Zalem, while low-born people live underneath in the junkyard metropolis known as Iron City. Many low-born people have cybernetic limbs and enhancements. One day cyborg surgeon Dr. Dyson Ido discovers a disembodied female cyborg with a fully intact human brain. Providing it with a body, the cyborg returns to life but does not remember her former life or her own name. Naming it Alita, Ido takes the cyborg and raises it like a daughter.

Fully embracing her new life, she meets a boy named Hugo, and the two form a connection. All the while, Iron City is plagued by a cybernetic assassin that attacks and dismembers humans. Confronting the assailant, Alita’s memories begin to resurface, and she recalls that she is the sole survivor of an ancient race of cyborgs as well as her mission to kill Nova, a Zalem scientist and the real monster behind the killings in Iron City.

Focusing on the things that the film could have done better first, I reiterate that the story could have been made more clear if more context was given early on. Yes, Alita’s backstory is explored throughout the film, but more details about her race would have helped my transition in the film, especially given that my knowledge of the original source content was nonexistent. A mere brief narration at the beginning would have accomplished this goal. Something else that could have been expanded on is the Zalem. It is my assessment that the city will be addressed more in the subsequent sequels, but as an audience member, I could have done with a little taste of things to come. I will give credit for the Edward Norton reveal; that was a pleasant surprise.

Speaking of cast, this was a great ensemble, even the addition of Ed Skerin, who was a bit typecast in my opinion. Then again, if it ain’t broke, don’t fix it, right? This was Rose Salazar’s first foray as a lead character, and though her face is computer-generated, this remains a solid performance. She is the perfect sleeper character, as her sweet and innocent appearance provides the perfect camouflage for the efficient killer underneath. Her character is open, and this aids the budding romance that she develops with Keean Johnson’s Hugo. Their chemistry is palpable and very clear when she offers something of significant value in order to help him achieve his dream, showing the depth of the two characters’ feelings for one another. Another pair with good chemistry was Salazar with her surrogate father, Christoph Waltz’s Dr. Ido. The affection for one another is a driving force for the story.

As a James Cameron production, you know there is a multitude of special effects that went into designing the world, and thanks to the IMAX experience I was able to take in every inch of the imaginative world, particularly the Motorball Arena, which is the center stage of the production and where a bulk of the action takes place. In addition to this action, there is first-rate hand-to-hand combat that is surprisingly realistic given that this a science fiction film.

Granted there are a couple bugs that if worked out, the film would have been slightly better; Alita: Battle Angel remains a solid and entertaining cyberpunk action film. It is a worthwhile experience, and Rose Salazar has solidified her kickass character with a priceless heart, literally.

Jeremy Butler is a film school graduate of the International Academy of Design and Technology. He is been writing for Upcomingdiscs since 2012; however, movies have played a big part of his life for much longer. Favorite genres include horror, science fiction/fantasy, and comedy. Favorite movies are V for Vendetta, Boondocks Saints, Kiss Kiss Bang Bang, and The Godfather.
American Vandal: Season One A Star Is Born (2018) (UHD Blu-ray) (4K)