The Key To Rebecca

Posted in: No Huddle by Brent Lorentson on February 22nd, 2019 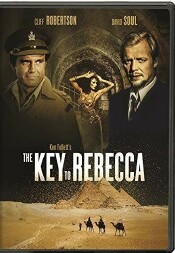 It was 1985 when The Key to Rebecca first aired. It was a made-for-TV film based on the novel by Ken Follett.  I had never heard of the film until a couple of days ago and had no knowledge of the book, so I was pretty much going into this with nothing more than the blurb you can read off the back of the DVD box.  The one thing that jumped out at me was the running time on the film: 3 hours and 14 minutes, so one thing I knew was it would be a film I’d be spending a decent amount of time with.  I have nothing against long film. I don’t care what the runtime is on a film, just so long as the film is good, and unfortunately The Key to Rebecca didn’t turn out to be the suspense-filled spy film I had hoped it would be.

The film takes place during the 2nd World War and is set in Cairo, Egypt. It’s in the middle of the desert; where the film opens up and we see Alex Wolff (David Soul) is being rescued.  It doesn’t take long before we discover that Wolff is working as a spy whose purpose is to supply information to the Nazis as they prepare to advance into Egypt and seize control. This is where Maj. Vandam (Cliff Robertson) comes in. Basically he is a spy hunter, and after it is discovered that a spy is responsible for the murder of a British soldier, he is put to task to find the spy and uncover his mission.  It’s a fun setup, but with a 3-hour-plus running time, there is so much padding to this story that it loses its punch.

Part of the padding to the plot involves Elene (Season Hubley), who is recruited by Vandam to help him track down Wolff. This relationship takes a not-so-surprising turn as the two become romantically involved, though one can’t be too sure about what Elene’s true intentions may be.  The relationship between Vandam and Elene does work, and I can understand that this was fleshed out to engage the female viewers at the time, but really it does become a bit tedious at times, not to mention how the film seems to go off course and spend time with the Major’s son.  Sure, getting to see the family life helps us get to know the character, but it does nothing for the plot. In a book this is fine, and I understand it’s there to fill time, since this was a 2-part series on TV, but that doesn’t mean it did the film any favors.

As for Wolff, he enlists a female of his own, a seductive belly dancer who has plenty of hate towards the British. He recruits her to help him steal information that he plans to hand over to General Rommell (Robert Culp), who is waiting out in the desert ready to strike.  The stuff between Wolff and his belly-dancing partner does add some sexy intrigue to the story, but even this at times feels a bit dragged out.

One of my favorite moments in the film comes at around the mid-point of the film where it seems Vandam may possibly have his man after Wolff has an altercation at a restaurant.  What’s set up is a fun (though highly unrealistic) chase through a labyrinth of  alleyways.  What I will also say is that when the film is in around the last thirty minutes or so the pace definitely picks up, and it did manage to win me over.

Watching this, yes, the film is very much dated and wouldn’t make much of an impact if this were to drop as a “NEW” film on Netflix, but as a product from its time it still has moments where it entertains.  The only issue on the technical side of the film that bothered me was the generic title cards and credits used in the film that gave it a cheap feel.  I have to admit it was a little strange seeing Cliff Robertson playing a suave ladies man; after all, for me, I look at him as Uncle Ben from the Spider-Man franchise.  I joke, but it is still fun to see him back when he was still in his prime, and he does well as a charismatic leading man.  This isn’t your typical war film. I’d put it in the same vein as Casablanca but not nearly as great as the classic, but if you like your wartime-era films filled with more intrigue than violence, The Key to Rebecca may be the film for you.

Brent Lorentson is a horror writer and film critic based out of Tampa, Florida. With a BA in Digital Film, he co-wrote and co-directed Scavenger Hunt. His short stories have appeared in various horror anthologies. In 2019 his short script Fertile Blood will be a part of the anthology horror film Slumber Party. He is currently working on his first novel A Dark and Secret Place set to be released in late 2019. Favorite Films: Taxi Driver, Fight Club, I Saw the Devil, The Wild Bunch, Dawn of the Dead, A Clockwork Orange, Pulp Fiction, Heathers, The Monster Squad, and High Fidelity.
A Star Is Born (2018) (UHD Blu-ray) (4K) Overlord