Posted in: Disc Reviews by John Delia on February 22nd, 2019 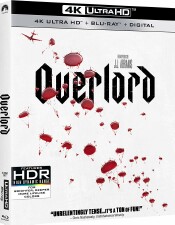 “Three months ago, I was cutting grass on my front yard. The mailman shows up with a letter from the army. Now I’m here, and no idea where I’m going to end up.”

Wow, another gut-wrenching action-packed war film that takes on an ominous shroud of terror.  It’s perfect for war buffs and horror fans who just can’t seem to get enough. The film Overlord from J.J. Abrams, the producer of the Cloverfield series, takes off in five minutes of absolute madness; then turns its guns on the Nazis as a squad of paratroopers look to complete a battalion saving mission. I loved every minute of the fast-moving film, and it brought back memories of the recent Trench 11 (2017).  If you like this one, check that one out for the fun of it.

It’s D-Day, and the Allies are headed for France to hit the beaches in the biggest assault of WWII. In the air we find a unit of paratroopers flying in a transport to a drop-off zone inside German occupied territory. Sergeant Eldson (Bokeem Woodbine) informs them that it’s their job to take out a radio-jamming tower that if not cleared by 6 AM the next morning could cause major damage to the landing Allied armies.

Their plane is being hit by ground fire, but in a saving pause several paratroopers bail out. On the ground the remaining soldiers are led by explosive expert Corporal Ford (Wyatt Russell) with only a small squad left for cover. They include Pvt. Ed Boyce (Jovan Adepo), who’s fluent in French, Chase (Iain De Caestecker), a photographer covering the war, Rosenfeld (Dominic Applewhite), a machine gunner, and Tibbet (John Magaro), a sharpshooter.

The five-man squad reach their destination, but are not in the best shape. Director Julius Avery puts the team in danger throughout the movie, creating exciting fighting between the Nazis in the small village and later when they make their final assault upon the radio tower.  But as a topper, there’s an element of horror awaiting the squad that’s so fierce their mission may never be completed in time. Good all-around suspense and challenges.

The acting by the whole cast is very good with standout performances by Jovan Adepo and Wyatt Russell.  The two put on a great show of strength, determination, and vengeance to help save their troops about to land on the Normandy beaches.  In solid support, Mathilde Olivier as a French citizen, Chloe, and Gianny Taufer as her very young brother, Paul, steal the show as they find themselves in the middle of the assault between both sides. With Private Boyce trying to keep them out of danger and complete his mission, there’s enough heroism to make it a separate movie.

Overlord  is presented in an aspect ratio of 2.40:1. The ultra-high-definition 2160p  image is arrived at by an HEVC codec with an impressive average bitrate of 60-65 mbps. The digital material was shot on a mixture of 2-3K settings. It was obviously mastered in 2K and up-converted here. It’s a solid film from the standpoint of black levels and textured shadow definition. There are some really nice moments where the HDR gives us just a flicker of light against a dominate dark background. Close-ups deliver pretty sweet facial detail that includes stubble, grease and dirt. Some of the CG blood stands out as being somewhat out of place, but the practical makeup f/x are quite solid and realistic. This film delivers a lot of atmosphere with a muted color scheme that fits the material perfectly. There’s an attention to detail in the production design that flourishes here.

The Atmos track defaults to a pretty good 7.1 mix. The subs dominate here. From the thundering planes under fire to some pretty good explosion material throughout, you get that nice little room shake from a high-end system. Dialog cuts through the mayhem with more ease than you would expect. The score delivers the peak emotional beats but manages to keep behind the action for the most part. The surrounds are most active on that plane sequence where you really will feel like you’re a part of the action. The underground labs have just the right amount of reverb because of the stone but are claustrophobic enough to maintain the atmosphere.

The extra is on the Blu-ray copy of the film.

Horrors Of War: (51:28) How the film was made in six features listed below.

They include: “Creation”, “Death Above”, “Death on the Ground”, “Death Below”, “Death No More” and “Brothers in Arms” Nearly an hour showing how the film was made. PLEASE do not watch these until after you have watched the film, as there are many spoilers.

Overlord has been rated R by the MPAA for strong bloody violence, disturbing images, language, and brief sexual content. The film features a lot of violence including an attempted rape that get thwarted in the nick of time.  The film does have some subtitles for the French- and German-speaking characters, but not too much to break the concentration. The film is available in 4K, Blu-ray, and DVD as well as Digital HD. A very good film for war buffs and horror fans.

John Delia has been on all sides of the movie business from publicity, writing for publications and on line blogs, script writing, to film making. Writer, critic, film editor he has worked as a film critic on this second go around for 14 years. He earned his Bachelor’s degree at the college of Journalism and Communications at the University of Florida in Gainesville, Florida. John is an active member of the Southeastern Film Critics Association (SEFCA) . Favorite Films: Lord of the Rings/Hobbit trilogies, The Godfather trilogy, the Indiana Jones trilogy (I didn't like the 4th), The Avengers and for TV it's Game of Thrones. As for animation it's a tie between anything Pixar and everything Hayao Miyazaki.
The Key To Rebecca How to Train Your Dragon 3: The Hidden World