Posted in: Disc Reviews by Brent Lorentson on February 20th, 2019 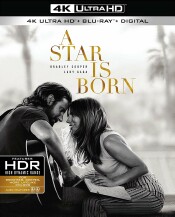 When I first heard that Bradley Cooper would be making his directing debut with A Star is Born, honestly, I kind of groaned.  It’s not because I didn’t believe he’d have the chops; after all, he’s worked with many successful directors over the span of his career. I groaned because I believed the world didn’t need yet another remake of the film.   This will be the fourth incarnation of the film, and while many can debate on which version is their favorite, the film was pretty much a relic I felt should have stayed in the past.  I mention this and want to also put it out there that even after some of the trailers I had caught for the film, my excitement level was pretty low going into this.  Well, this turned out to be the sleeper hit of the year for me.  Sure, many could have told me this would be a hit, and because of the cast I wouldn’t dispute it, but when I walked out of the auditorium I felt like I had experienced something special (even if it had been made three times before).

The film opens with Jackson Maine (Bradley Cooper) taking the stage and performing for a large crowd.  After his show he’s looking to get a drink and stops off at the closest bar; as it turns out it is one that caters to drag queens.  Jackson doesn’t care about the location; all he’s interested in is getting some drinks, but that all changes when he sees Ally (Lady Gaga) perform on stage.  As the night stretches on and the two continue to get to know one another, one thing is undeniable; the chemistry between Cooper and Gaga is phenomenal.  The flow of the first act of this film is perfect, and by the time Maine has Ally convinced to go on tour with him, I was convinced this movie would be a box office smash.

The way Cooper handles this performance is a bit unexpected.  Maine is a really likeable guy, but his alcoholism and his pill addiction are definitely flaws that take him and his relationship along with his career to some dark places.  But Ally remains his saving grace and manages to pull him back up every time he stumbles.  To a degree this role somewhat reminds me of  Jeff Bridges in Crazy Heart, but what Cooper manages to pull off here is definitely a career high, and most likely a performance that will get him a few nominations.  As for his unique voice he uses in the film, well, it’s an amusing nod to his older brother Bobby (Sam Elliot) who is somewhere between Jackson’s manager and the one who fixes all of Jackson’s messes.  Elliot is great as usual, and seeing him and Cooper play off one another is one of the high points of the film.

Then there is Lady Gaga. She’s had some bit parts in TV and film, but she’s never really had that chance to really put it all out there.  Like the character she plays, Gaga as we know is a singer and songwriter, so you’d think this would be a simple performance for her.  Make no mistake, this is a performance that shows us that she is the real deal, and her acting is almost as good as her voice (in case you didn’t know, she has an amazing voice).  As we see Ally develop over the course of the film, we see her evolve from the shy, talented girl to a pop star, but it’s the in-between moments as her relationship weaves through the highs and lows that she shines.

What is also remarkable is the screenplay that Cooper penned along with Eric Roth and Will Fetters.  This is a tricky film, as it has a lot to juggle in a runtime of 2 hours and 15 minutes, but the balance between the romance, the alcoholism, and the music is well crafted.  The digs at the music industry and how the characters deal with being a celebrity in the modern age is what keeps this nicely grounded.  I’m especially a fan of the bits where we see Jackson growing uneasy as Ally seems to veer away from the music she and he originally were doing together as her management pushes her into a more pop-star image.

One of the more subtle charms of the film is the cinematography, Matthew Libatique is responsible for shooting the film (amusing anecdote: he is also shooting Venom, which has its release the same day as A Star is Born).  What I liked most is how intimate the film is, where during the performances instead of playing it safe with wide shots, the camera gets right in close to the performers where we can see the pain and pleasure they are experiencing while performing.  Then factor in the performances from the variety of actors that fill out the cast like an unrecognizable Andrew Dice Clay, Dave Chappelle, and a handful of others, you can understand how this should be a critical and box office success; everything seems to be in the film’s favor.

The soundtrack I’d expect to be a chart-topper as well; there are a handful of songs here that are really good and are of the caliber fans have come to expect from Gaga.  But the biggest win for the film is how it manages to tell a compelling story without big special effects, and despite having an epic feel to it, it is sweet, intimate, and heartfelt.  I think the best compliment I can give this film is that it plays like a great album that once it finishes you can’t wait to check it out again.  This has a special kind of replay value that will suck fans in, and I’d expect this to be a film we are talking about through the awards season and a fan favorite.  Is it the best film of the year?  It’s too soon to tell, but I’m willing to bet this will make many top-ten lists.  Like I said before, this was a film that I didn’t expect to make such an impact, and I expect I won’t be the only one to be happily taken off guard by this one.

A Star Is Born is presented in an aspect ratio of 2.39. The ultra-high-definition 2160p  image is arrived at by an HEVC codec with an impressive average bitrate of 55-60 mbps. This is a digital source filmed in 2.6K and up-converted for this release. The HDR and Dolby Vision deliver wonderful concert footage within the film. The tight, bright lights of the stage often pierce so finely against solid black backgrounds. It’s the most notable upgrade from the Blu-ray where colors are a bit more muted and the contrast just can’t cut like this one does. That also includes such solid shadow definition that you can pick out clothes along with color and texture just at the edge of the light in the audience scenes. The lighting is there for mood and atmosphere and often lights the principals perfectly so that we get all of that facial expression and detail. It can quickly go from a very intimate film to an extremely crowded concert setting, but we never really lose those close-up details that manage to maintain that intimate atmosphere in even the largest crowds.

The Atmos track defaults to an extremely solid 7.1 mix. Just as it was in Bohemian Rhapsody, the music is the standout in this audio presentation. The audio is crisp and dynamic. I was particularly taken with how it played off the distinct styles of Lady Gaga and Cooper. He has a deep almost rasping-edged sound that eats up the support from the subs. Gaga has a higher, almost more refined flavor that lives more comfortably in the high ranges. When they come together you get this perfect storm of equalization that is what creates that musical chemistry. Dialog is often subdued, and it always comes through; even when Cooper is talking in his drunken stupor, you can hear it clearly. The people on the film also know when to make things quiet, and like music itself the film thrives most in the spaces between the sounds. The surrounds take you into the concerts, and the crowd surrounds you with chatter and applause. The entire audio presentation works to make sure the specifications of a space ring true. The delay of a massive hall is clearly defined against the moments where the characters are in a quiet room.

Road to Stardom: (30:02) Here we get a feature that has a little bit of everything, from the cast and crew sitting together discussing their experiences to having behind-the-scenes footage.  I really liked this, but it left me wanting more, because there are some great moments captured here that fans rarely get to see.  Getting to see and hear about Cooper and Gaga practicing together, to the tragic moments that occurred on the big day they filmed Gaga performing “I’ll Never Love Again” for the film are just a taste of why this is a must-watch feature for fans of the film.

Jam Sessions & Rarities: There isn’t a PLAY-ALL option here, but what it is are three songs where we see a mix of rehearsal footage alongside with footage from the completed film.  These are the finished versions of songs we saw only parts of in the film.

Baby What You Want Me to Do

Music Videos: Pretty self explanatory, and again there is no PLAY-ALL option.

Always Remember Us This Way

Look What I Found

Musical Moments: (28:33) So let’s say you don’t care about the film’s great story, and all you want to see are the musical performances; this is the option for you.  It’s a fun option to have, but I’m a sucker for this love story and have to watch it start to finish.

I’ve seen this a few times now, and this film continues to entertain and carry an emotion wallop.  I’m glad to see this nominated for Best Picture, and I’m surprised Cooper didn’t get the nod for his work as director, because this is an impressive piece of work, and it stands out more so considering it being a somewhat lackluster year at the movies.  This is the perfect date night movie that I feel everyone can enjoy, and these kinds of films don’t come around often.  This is one where you want to crank up the music, and I’d imagine many will want to sing along too. I can’t recommend this film enough; this is easily the must-see film from 2018.

Brent Lorentson is a horror writer and film critic based out of Tampa, Florida. With a BA in Digital Film, he co-wrote and co-directed Scavenger Hunt. His short stories have appeared in various horror anthologies. In 2019 his short script Fertile Blood will be a part of the anthology horror film Slumber Party. He is currently working on his first novel A Dark and Secret Place set to be released in late 2019. Favorite Films: Taxi Driver, Fight Club, I Saw the Devil, The Wild Bunch, Dawn of the Dead, A Clockwork Orange, Pulp Fiction, Heathers, The Monster Squad, and High Fidelity.
Alita Battle Angel The Key To Rebecca