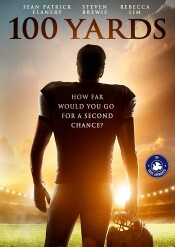 In life, we all fall down; it’s a fundamental fact of life. This is a story about how we get back up. 100 Yards is about Rich Porter, an NFL prospect who loses his way after suffering tragedy. With a potentially great opportunity in front of him, he cuts himself off from the world. The hits just keep on coming as he is diagnosed with cancer. Instead of battling his disease, he is resigned to his fate until his meets a young boy with the same condition as well as a compassionate nurse that try their best to bring Rich back to the light and get him to hope again. 100 Yards is a story about regaining faith that no situation is completely lost, and it is about how we approach it.

This is an emotional tale; that is made evident early on as we watch Rich Porter sacrifice an opportunity of a lifetime, going from a number one NFL draft pick to relocating to the Philippines to search for his missing mother. He is not the only person suffering in this story, but he is the engine that drives forward the plot, and you can’t help but feel for him. His loss is significant, making him very relatable. Honestly, I would mostly likely respond in a similar way if I was in his shoes.

However, the method of redemption in this story is a very interesting one: a simple game that also serves as a namesake of the movie, a broken electronic football game with homemade cards with good deeds to accomplish in order to move up in the game. A key component for this dynamic is Rich’s relationship with the boy who suffers his same condition. His innocence and sweet nature are the only things that cut through Rich’s temper and self-destructive tendencies. Redemption is a key component of the story, and another character who reaches a great story arc in this respect is the character of Ray Quinn, played by Sean Patrick Flanery, a reporter who wrote a damaging article about Rich some time earlier and comes back to write a follow-up. Once considered a friend, Ray is forced to face his wrongs and presented the opportunity to make things right. This subplot served the film very well. Flanery gives an inspired performance.

Although the show unfolds in a bit of a predictable manner, the tempo is very entertaining. The big twist that occurs at the climax of the story is one that I did not see coming. I was certain that the film was going to go with an extreme loss in order to ramp up the emotional aspect, but instead the film opted for a conclusion that though bittersweet provided more of a cathartic ending.

Albeit this film reveals a great deal on religious faith, it does not overpower the film. It is a story of redemption at its core and stresses the importance of approaching your problems with the right attitude. This was my key takeaway from the film. I most certainly recommend it for others. The world is forever getting darker, but with the right tools, you can find the light again.

Jeremy Butler is a film school graduate of the International Academy of Design and Technology. He is been writing for Upcomingdiscs since 2012; however, movies have played a big part of his life for much longer. Favorite genres include horror, science fiction/fantasy, and comedy. Favorite movies are V for Vendetta, Boondocks Saints, Kiss Kiss Bang Bang, and The Godfather.
Exclusive Interview With Patrick Kilpatrick, Actor & Author Of Dying for a Living: Sins & Confessions of a Hollywood Villain & Libertine Patriot Ancient Aliens: Season 11 (part 2)