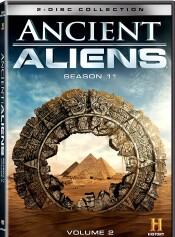 It has actually been a while since we’ve been given a copy of an Ancient Aliens season to review. So you’ll have to excuse me if I’ve somewhat lost my way. This time we have the second half of the 11th season. There are nine episodes but it’s more like 13, because this collection takes a rather different turn for the series. In the past there really weren’t many two-part episodes, but there are four of them out of the nine found here on two discs.

The show has also discovered that one of its most popular contributors is Giorgio Tsoukalos. He’s the guy with the Don King hair. This season they decided to send Giorgio out into the field and film his reactions to getting an up-close look at some of his favorite subjects. His road trip begins in Egypt where a new chamber has been discovered through imaging. The chamber has not yet been opened, so the speculation can still run crazy. Giorgio proposes things like a stargate chair or other important clues to finally prove the ancient astronaut theory. He does get to go inside the Great Pyramid, and that alone is likely worth our price of admission no matter what you might think about his theories. The next stop is an island off Italy where it is believed a race of giants once lived. He ties it to the Biblical idea of angels mating with human women and creating the race known as the Nephilim. Thousands of statues were discovered there in 1974 but not publically displayed until the year 2000. Of course, Giorgio is going to have a field day with that. His next stop was Easter Island and those iconic statues. They have kind of already been done to death on the series, and this time they look at a possible force field they created to protect the island in ancient times. There’s also a part where the ruins depict flying turtles that he proposes represent flying saucers. His evidence? He says that they knew turtles couldn’t fly, so why would they depict them? I guess he’s never seen a Gamara movie. I think the Japanese know turtles don’t fly, but they made movies about one. I don’t think it’s because the filmmakers saw flying saucers. It’s my one big gripe on the show. They constantly bring up the idea that in order to depict something it has to have been witnessed. There’s no room for the idea of fiction in their narrative no matter how prominent it is in our society.

There is episode that explores a secret Soviet/Russian pact on aliens and alien technology. I’m surprised that it’s taken this long, but there’s a two-part episode that profiles Erich von Daniken and his pioneering of the ancient astronaut theory with Chariots Of The Gods. Giorgio travels to see him and visit a church chapel where he first imagined the ideas. This guy is so much a part of the show and the theories behind it that this is a milestone episode for the show. There’s also a two-part greatest hits show that touches on the big elements. It’s almost like this show’s version of a clip show. There’s an episode that deals with steering asteroids and that they might have been used to deliver life to Earth. There’s the obligatory alien abduction episode that coincides with a big convention in 2018. There’s one on robots of both the future and past, and I will admit that one of these glyphs sure looks like C3PO. Finally there’s a two-part episode on Mars and our efforts to discover its secrets.

Look, I would love to believe this stuff. Like Mulder, I want to believe. I certainly do believe there is plenty of life out there. It seems impossible for there not to be. I don’t believe they visited Earth in ancient times, and I’m not sure I believe they ever did. In spite of having my own UFO experience, there’s just not enough evidence to turn me around … yet. Who knows what we’ll discover in the future. I’m sure Ancient Aliens will still be there to cover it. But sometimes, “It’s just beyond belief.”

Gino Sassani is a member of the Southeastern Film Critic's Association (SEFCA). He is a film and television critic based in Tampa, Florida. He's also the Senior Editor here at Upcomingdiscs. Gino started reviewing films in the early 1990's as a segment of his local television show Focus. He's an award-winning recording artist for Omega Records. Gino is currently working on his 8th album Merchants & Mercenaries. Gino took over Upcomingdiscs Dec 1, 2008. He works out of a home theater he calls The Reel World. Favorite films: The Godfather, The Godfather Part II, The Body Snatcher (Val Lewton film with Karloff and Lugosi, not the pod people film), Unforgiven, Gladiator, The Lion King, Jaws, Son Of Frankenstein, The Good, The Bad And The Ugly, and Monsters, Inc.
100 Yards The Favourite (Blu-ray)