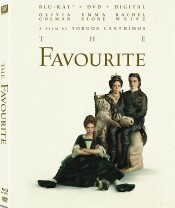 The Favourite is a somewhat awkward film. Director Yorgos Lanthimos took on a rather brave but dangerous task when he decided to create a farce. Most audience members don’t understand the term. They use it rather synonymously with comedy or spoof, but it is truly something very different. A comedy is meant to deliver as many laughs as possible. You get pratfalls, one-liners, slapstick, and other over-the-top methods to bring about those laughs. Spoofs take a specific subject or genre and expose some of the more innate aspects of the material, all in good fun. Leslie Nielsen was a master of the spoof with his Airplane and Naked Gun films. All of these are popular and understood forms of entertainment. The farce is a totally different thing altogether. While there might be laughs to be had, the primary directive of a farce isn’t to actually be funny. The farce is a world of the absurd. It’s a ridiculous portrayal in which everyone involved plays it completely straight. The actors/characters don’t know they are in a farce, so there aren’t any clever one-liners or overt attempts at humor. The film is presented as a serious attempt, and there is no one winking at the audience. It’s a difficult thing to pull off, and The Favourite pulls it off wonderfully, but the unfortunate result is that most people merely shook their heads, not knowing what to make of the entire thing. So the film is misunderstood, and that in itself is a bit of a tragedy. It’s somewhat appropriate, I suppose, because Shakespeare was a master of both farce and tragedy. Go figure.

The story brings us back in time to the later years of Queen Anne’s (Colman) rule in England in the beginning of the 18th century. She is a clueless queen in the middle of a war with France and completely in the dark about any of it. Her decisions are being influenced and outright directed by her trusted confidant, Lady Sarah Marlborough (Weisz), who is also her secret lover. She pretty much enjoys the run of the castle and the country when a distant cousin arrives to seek employment at the castle. Abigail (Stone) seeks refuge from a family that has fallen on dark times, mostly due to her father’s gambling. She enters the Queen’s service as a lowly scullery maid but begins to see an opportunity when she learns Sarah and Anne’s secret. She imposes herself on the queen by helping to ease her painful legs covered with lesions. Eventually she conspires to remove Sarah from the picture and manages to do so at least for a short while. But it was enough for her to become as invaluable to the Queen and regain her own Lady status. Her schemes eventually lead to Sarah’s and her husband’s downfall. Unfortunately for Abigail, the Queen’s health is failing, and it’s obvious even her influence will be short-lived.

What makes this such a wonderful farce is the detail of the production design and the captivating performances of the cast. Everything here is played out as if it where an historical costume drama. It’s so convincing that the director has had to state on many occasions that the film’s purpose is not historical accuracy. Of course, most people walk away thinking that it was and start taking to Google to learn what they can of the period. In my mind it makes the farce that much more brilliant that it pulls it off to the extent the audience has to be told they were not watching an historical drama. It’s likely a sign of our own times where cell phone cameras and social media reveal the absurd in our own society so often that most folks start to think it’s the norm. Perhaps that is a sign that the farce is no longer a vehicle that can work in the modern world.

Rachel Weisz had a rather good year in 2018. Disobedience finds her in a very different role. In both cases she has been compelling. This film brought her an Oscar nomination, but she failed to take home the award. She did win in 2006 for The Constant Gardiner. I loved both 2018 performances, and her chemistry here with Olivia Colman, who plays Anne, is quite captivating. A lot of credit here should go to Colman, who did deservedly win the Best Actress award at this year’s Oscars. It’s easy to play a good hero or villain. It’s hard to put yourself in the kind of role Colman does here. It’s debasing, and the character is nothing short of a witless fool. I suspect as hard as that might be there’s quite a lot of fun in playing this kind of a character. Queen Anne is ugly both inside and out. She’s riddled with disease and quite mentally absent. That’s nowhere near as easy as one might expect. And finally there is Emma Stone, who completes this strong female triad as the ambitious Abigail. The three dominate the film’s screen time and are the heart of the story. There are plenty of wonderful supporting roles, but make no mistake, these three ladies dominate the film, and credit director Lanthimos for letting them have the freedom to make it work.

The Favourite is presented in its original aspect ratio of 1.85:1. The 1080p image is arrived at with an AVC MPEG-4 codec at an average 30-35 mbps. The high definition image presentation is not as good as I had hoped. There is a lot of great production design here, and the transfer really doesn’t bring it all to life as well as it likely does in 4K. The huge issue is the lighting. The film uses a lot of source lighting, which means candles and oil lamps. That makes the tone decidedly warm with plenty of high yellow and orange hues. The flicker of candles creates a good job revealing textures and detail. Lanthimos uses some rather clever fisheye lenses that add some spice to the image presentation, and there are some rather nice camera angles throughout. I just wish some of that great detail came through here. Black levels are weak, providing almost no real shadow definition. It’s all so rather soft that it never does justice to the material’s careful attention to detail.

The DTS-HD Master Audio 5.1 is a somewhat better presentation. The surrounds do a pretty solid job of bringing out the echo and surface characteristics in the stone passages and the cavernous rooms. The dialog is of utmost importance, and the audio presentation does not disappoint. There’s a nice gentle support from the subs that allow for wonderfully deep and clear conversations. The score is a wonderful mix of harpsichord and strings that add atmosphere to the setting and come through quite nicely in the speakers. The end credit version of Elton John’s Skyline Pigeon was compelling enough to keep me through the credits on multiple screenings.

Deleted Scenes: (2:47) There are four with no individual selection.

The Favourite – Unstitching The Costume Drama: (22:19) You get the typical sound bites from the cast and crew who share some insight into the production. There’s a lot of defending the decision to ignore historical accuracy, but nothing really to educate the audience about the farce nature of the material. The behind-the-scenes feature looks at many aspects of the production: costumes, locations, makeup, casting, production design, and story.

The important part of a farce is that everyone takes it seriously except the audience, and even they are intended to take it seriously up to a point. I’m afraid that in doing the genre so well, the film could not really find an audience that appreciated it for what it was. Yes, you could have had the film telegraph the jokes and punchlines, but that’s not what this is. I hope some of you who have already formed an opinion of the film will take another look with this new information in mind. See it for what it really is. “Otherwise it’s just nonsense.”

Gino Sassani is a member of the Southeastern Film Critic's Association (SEFCA). He is a film and television critic based in Tampa, Florida. He's also the Senior Editor here at Upcomingdiscs. Gino started reviewing films in the early 1990's as a segment of his local television show Focus. He's an award-winning recording artist for Omega Records. Gino is currently working on his 8th album Merchants & Mercenaries. Gino took over Upcomingdiscs Dec 1, 2008. He works out of a home theater he calls The Reel World. Favorite films: The Godfather, The Godfather Part II, The Body Snatcher (Val Lewton film with Karloff and Lugosi, not the pod people film), Unforgiven, Gladiator, The Lion King, Jaws, Son Of Frankenstein, The Good, The Bad And The Ugly, and Monsters, Inc.
Ancient Aliens: Season 11 (part 2) Contest: Win The Little Mermaid: 30th Anniversary Edition On Blu-ray From Walt Disney Studios