Posted in: Uncategorized by Gino Sassani on March 14th, 2019 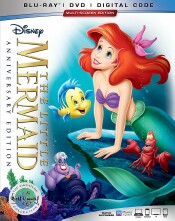 Our friends over at Walt Disney Studios are going to be keeping us very busy over the next few weeks. They’ve decided that our faithful followers deserve some free stuff and I couldn’t agree more. First up we have the Disney classic The Little Mermaid: The 30th Anniversary Edition on Blu-ray. We can resist the wonderful animation and those great songs? It’s perfect for kids of all ages and you should absolutely let us treat you to a copy on us and Disney.

Contest is open to residents of the U.S. & Canada only, and will conclude on Sunday, April 28th, 2019
Please – only one contest entry per person!

Gino Sassani is a member of the Southeastern Film Critic's Association (SEFCA). He is a film and television critic based in Tampa, Florida. He's also the Senior Editor here at Upcomingdiscs. Gino started reviewing films in the early 1990's as a segment of his local television show Focus. He's an award-winning recording artist for Omega Records. Gino is currently working on his 8th album Merchants & Mercenaries. Gino took over Upcomingdiscs Dec 1, 2008. He works out of a home theater he calls The Reel World. Favorite films: The Godfather, The Godfather Part II, The Body Snatcher (Val Lewton film with Karloff and Lugosi, not the pod people film), Unforgiven, Gladiator, The Lion King, Jaws, Son Of Frankenstein, The Good, The Bad And The Ugly, and Monsters, Inc.
The Favourite (Blu-ray) Instant Family (Blu-ray)