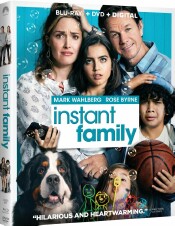 This film really helped me to gain an understanding into the world of adoption. Beforehand my knowledge was basic. I had no idea of the real challenges that come with opening your doors and hearts to a child in the foster care system. This film also has the added benefit of being one of my favorite films of 2018, as it was a film that my wife insisted on seeing, and I was just indulging her, but I ended up loving it more than she did. Which is saying something, as she really loved the film. Loosely based on writer/director Sean Anders’ own experience, Instant Family gives a voice to the ups and downs of the foster care system as well as the adoption process.

Mark Wahlberg and Rosa Byrne star as Pete and Ellie Wagner, who get more than they bargain for when they decided to become foster parents. Initially wanting to provide a home to an older girl named Lizzy, the couple is stunned when they learn that Lizzy comes with two younger siblings, Juan and Lita. Unsure if they can handle the responsibility of three kids, the couple initially turn down the opportunity, only to be reinvigorated after their family doubts their ability to rise to the challenge.

The couple find themselves overwhelmed with the responsibility of caring for two young children, as well as the realization that the frankness and spirited attitude that attracted them to Lizzy does not come with an off switch. As their connection with younger kids grows, they get a handful of teenage woes.

Wahlberg and Byrne are no strangers to the comedy field with films like Ted and the Neighbors under each of their belts, but I do believe that this is both of their first forays into a family-friendly film of this caliber, and they both pull it off in such a grounded and reality-based way. They are the heart of the story as their fresh-faced idealism meets with the everyday challenges of the system. They show that not only is it difficult to build a relationship with the child, but the stress can also affect the relationship of the parents. Regardless, they remain warm and loving throughout.

This film is not afraid to tackle the real issues, including the ever-looming threat that these children that you love and care for can be taken away should the biological parents clean up their acts and choose to assert their parental rights. That fear alone requires a strong and selfless kind of person. Truth be told, I always saw adoption as a viable option, but the idea of the child that I’ve come to love being taken away at a moment’s notice is a fear I don’t believe I would be strong enough to face.

This is a charming story and features cameos from several great talents and comedians including Tom Segura, Octavia Spencer, Tig Notaro, Joan Cusack, and Illiza Shlesinger.

This is a wholesome and worthwhile movie experience that I urge everyone to take a part in. This was very much a story that needed to be told, and it is done in such a tasteful manner that there is something for every member of the family to relate to and enjoy.

Jeremy Butler is a film school graduate of the International Academy of Design and Technology. He is been writing for Upcomingdiscs since 2012; however, movies have played a big part of his life for much longer. Favorite genres include horror, science fiction/fantasy, and comedy. Favorite movies are V for Vendetta, Boondocks Saints, Kiss Kiss Bang Bang, and The Godfather.
Contest: Win The Little Mermaid: 30th Anniversary Edition On Blu-ray From Walt Disney Studios Fantastic Beasts: The Crimes of Grindelwald (UHD Blu-ray) (4K)