Foreigner – Live at the Rainbow ’78 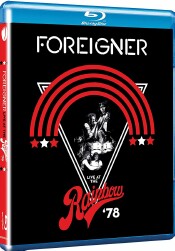 Foreigner was one of those bands that managed to bridge the sounds of the 1970’s and 80’s. They had that solid classic rock sound but managed to work in some legendary hooks that gave the band life beyond most of the members themselves. Eagle Rock Entertainment has unearthed quite a little unpolished gem from the archives here. The band hit pretty well with their first self-titled album moving around four million copies with an almost instant hit in Cold As Ice. That song established the band’s best moments of synth pop and edgy vocals and lyrics. So with just one album under their belt the band set out on the road and managed a successful tour. But they didn’t just lean on that one album. They were already putting the final touches on their peak album Double Vision with the hit title track and Hot Blooded. The band’s moment in time was secure, and they were able to treat this lucky 1978 crowd to a taste of what was to be. The release is called Foreigner: Live At The Rainbow ’78, and you’ll get to see past and future come together for a musical milestone moment in time.

Foreigner was pretty much the brainchild of Mick Jones, who brought together a unique blend of American and British musicians to create a different kind of vibe for the time. That original lineup is on display here, with Lou Gramm on vocals and percussion, Ian McDonald on keyboards, guitars, sax, flute, and vocals, Al Greenwood on keyboards, Ed Gagliardi on bass, and Dennis Elliott on drums. What makes this such a special release is that the band’s members changed fast and often. I was lucky enough to catch the lineup in Philly, and this release certainly brings back memories.

These are the days before such elaborate stage productions. This is as simple as it gets. Tame light show with the focus entirely on the music. In those days we didn’t need large video screens to keep our attention. It was all about the music, and that gave Foreigner somewhat of a leg up on the whole business of the day. This concert was filmed April 27th, 1978.

This is Foreigner in a bit more of a raw form, as well. Unfortunately, the mix isn’t impressive, and some of those iconic keyboard riffs and vocals really don’t punch like they do on the CD’s and would later in concert. They were still feeling themselves out somewhat, but raw isn’t necessarily a bad thing. I almost got the feeling like I was seeing a demo performance where just the first familiar moments start to begin to take shape. Look at it like an origin story, but not for a superhero. This is for a band. That means it will likely only appeal to fans and isn’t likely to create new ones. There are much more polished versions of these songs out there to lure in the next generation of fans. But once you do get hooked, you’ll have a growing appreciation for this kind of thing. You also have to take into account the technology of 1978, both in sound and image quality. I’m not trying to make excuses for the disc. It’s strictly for the fans who might think it “feels like the first time”.

The Damage Is Done

Fool For You Anyway

At War With The World

Gino Sassani is a member of the Southeastern Film Critic's Association (SEFCA). He is a film and television critic based in Tampa, Florida. He's also the Senior Editor here at Upcomingdiscs. Gino started reviewing films in the early 1990's as a segment of his local television show Focus. He's an award-winning recording artist for Omega Records. Gino is currently working on his 8th album Merchants & Mercenaries. Gino took over Upcomingdiscs Dec 1, 2008. He works out of a home theater he calls The Reel World. Favorite films: The Godfather, The Godfather Part II, The Body Snatcher (Val Lewton film with Karloff and Lugosi, not the pod people film), Unforgiven, Gladiator, The Lion King, Jaws, Son Of Frankenstein, The Good, The Bad And The Ugly, and Monsters, Inc.
The Last Man (Blu-ray) Mortal Engines (UHD Blu-ray (4K)