Posted in: Disc Reviews by Jeremy Butler on March 22nd, 2019 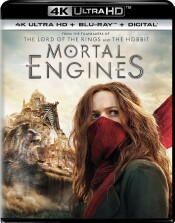 “60 minutes is all it took for the ancients to bring humanity to the brink of destruction.”

It only took Peter Jackson’s crew along with director Christian Rivers 128 minutes to bring their audience to the bring of falling asleep with their Star Wars rip-off of Mortal Engines based on a series of books by Philip Reeve. Universal was likely looking for a franchise hit here. Hugo Weaving couldn’t save it. Impressive visual f/x couldn’t save it. When I discovered the film had been in some kind of production phase since 2008, it all started to make a little sense. Sometimes the harder you work on something, the more you lose sight of the simple aspects of the film. Most importantly, you lose the connection to emotional characters, and you stop telling their story, but force them into telling yours.

Aristotle once paraphrased that “Nature abhors a vacuum,” which is the main thing I keep thinking while watching Mortal Engines, another in a long line of books turned movie adaptations. It seems like everyone is trying to fill the hole left behind by Harry Potter and Twilight (love or hate it, you have to admit that it brought in the teeny boppers) franchises. Unfortunately, I do not see this film becoming a worthy successor to the throne. Initially, I was intrigued by the premise: cities mounted on wheels devouring other cities. It had a real Transformers meets Mad Max vibe to it. If only the film lived up to the preview.

The movie is set in a dystopian world, ravaged by an apocalyptic event known as the “Sixty Minute War”, which caused massive geological upheaval. To escape the destructions, cities have installed huge engines and wheels and been enabled to dismantle (or eat) other cities for resources. This act has become known as “Municipal Darwinism”. As a result of the war, much technological and scientific knowledge has been lost. Because scientific progress has almost completely halted, “Old Tech” is highly prized and recovered by scavengers and archaeologists. Europe, some of Asia, North Africa, Antarctica, and the Arctic are dominated by Traction Cities. There is conflict between these cities and a group called the Anti-Traction League, which seeks to keep cities from moving and thus stop the intense consumption of the planet’s remaining resources. That should bring those unfamiliar with the series up to speed regarding the film, which is a better intro than I received while watching the movie.

Getting to the heart of the story, it follows a young woman name Hester Shaw (Hera Hilmar) as she attempts to carry out an assassination plot against Thaddeus Valentine (Hugo Weaving), a prominent in London society who is also responsible for the death of her mother. The attempted murder is thwarted by Tom Natsworthy (Robert Sheehan), an aspiring aviator turned historian, who pursues Hester after she flees. Before escaping, Hester informs Tom as to the kind of man that Valentine is. Upon confronting Valentine with this information, Tom finds himself thrown down the same chute that Hester escaped down.

Meanwhile, the conflict between Traction Cities and the Anti-Traction League is reaching a volatile point as resources to fuel the cities are becoming scarce, and London will need to penetrate the resources behind the Anti-Traction League’s sonic wall if they are to survive. To achieve this objective, Valentine is constructing a weapon that has long been forgotten that has the potential to bring the world to verge of extinction again. To stop him, Hester and Tom will have to put aside their differences and work together.

The film sacrifices story development in favor of a big production budget geared towards special effects. Based on my cursory research into the book series, there was a wealth of detail that could have gone a long way towards establishing this film as a solid opener. As is, I do not see real franchise potential, which is a shame, as I am a big fan of Robert Sheenan, dating all the way back to his run on Misfits. Performance-wise, the film is fine; there was a decent amount of chemistry between the lead characters, and of course Hugo Weaving was a big draw for the film. The most notable performance in my opinion was Jihae as Fang. She was a woman of few words and not afraid to spill blood for the cause that she believed in and the people she cared about. I found her to be an engaging and intriguing presence on the screen, a solid opening for the actress.

I can’t help but feel sad about the wasted potential; the story was too convoluted, and time was wasted on unnecessary characters. Additionally, the alterations away from the source material are unlikely to endear the film to fans of the book. As I said earlier, this was an obvious money grab in order to capitalize on the younger masses and purveyors of adaptation films. Gino compared it to Star Wars, and in truth there are several similarities that will be hard for the audience not to see. However, these elements are better depicted in Star Wars.

Mortal Engines is presented in an aspect ratio of 2.39:1. The ultra-high-definition 2160p  image is arrived at by an HEVC codec with an impressive average bitrate of 65-70 mbps. Whatever issues I had with the film, and they were legion, the ultra high definition image presentation is one of the best I’ve encountered to date. There’s quite a lot of detail in this steam punk style, and the various degrees of rust and damage on the metal cities is quite startling. The production design was careful to deliver things that were unlikely to even be caught by the eye of the audience, but it prepared them for this kind of exceptional viewing experience. Black levels dominate with very deep and inky blacks that provide so much shadow detail both in live-action and in the f/x areas which are seamless for the most part. The HDR delivers a terrific level of contrast most appreciated by fires that often dot this dystopian landscape. The firelight doesn’t bleed. Colors are often muted, but there are notable places were bright and vivid colors are permitted to pop. Hester’s red scarf details nice texture and deep color. The airships also stand out as a hopeful bright color force against the gritty and dark nature of the cities. In London itself this level of darkness is used effectively to distinguish class as you descend deeper into the bowels of the hungry city.

The Atmos track defaults to a powerful 7.1 mix. Again the presentation is over and beyond the quality of the film itself. These are clanking moving monstrosities and the industrial sounds dominate the surrounds, while the mains bring us a very manic score. Dialog manages to cut through, while subs can often dominate the landscape here. You get that constant theme of motion in the cities from the surrounds when you have really no visual indication at times. The more tranquil world of the air ships stands in nice contrast to that constant grinding.

There is one collection of extras on the UHD disc. The rest are all on the Blu-ray copy only.

Welcome To London: (26:22) This is the feature that could be found on both. In UHD the feature is indeed 4K, but not HDR. There are five parts to this behind-the-scenes journey, broken into bites to avoid royalty issues. There is a play-all. Cast and crew take you on set tours and gives you a peek at conceptual art, pre-viz, costume design, production design, f/x, and pretty much all of those production departments.

End Of The Ancients: (3:13)  The character of Tom gives you a look at some of the ancients’ props and what his character supposed their meaning or purpose happened to be.

Character Series: (21:43) This is another multi-part feature which looks at the following characters with another handy play-all option: Hester Shaw, Tom Natsworthy, Anna Fang, Thaddeus Valentine, and Shrike.

In The Air: (4:52) A look behind the scenes of the air city. Again there’s plenty of concept art and behind-the-scenes footage while cast and crew simply marvel at it all.

In conclusion, the audience like me will likely walk away from Mortal Engines with a sense of disappointment for what could have been, if only the proper amount of time was invested in the story development.  I would also be genuinely surprised to see the film win the weekend, as viewers will quickly deduce that the film is all fireworks and very little substance.

Jeremy Butler is a film school graduate of the International Academy of Design and Technology. He is been writing for Upcomingdiscs since 2012; however, movies have played a big part of his life for much longer. Favorite genres include horror, science fiction/fantasy, and comedy. Favorite movies are V for Vendetta, Boondocks Saints, Kiss Kiss Bang Bang, and The Godfather.
Foreigner – Live at the Rainbow ’78 Mary Poppins Returns (Blu-ray)