Posted in: Blu-ray, No Huddle Reviews by Gino Sassani on April 3rd, 2019 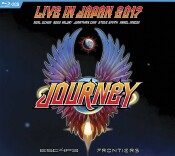 There’s a Chinese proverb that says a journey of a thousand miles begins with one step. In rock “n” roll history that proverb is a little different, and it goes something like, “A Journey into the Rock “n” Roll Hall Of Fame starts with a dozen hit songs.” And that’s exactly where Journey landed in 2017 after kicking the year off with a return to one of the first arenas to hear those hits 35 years earlier. In 2017 Journey was inducted into that Hall Of Fame and played two sold-out nights at the Budokan in Japan where the band first debuted the hit songs from their 8th and first hit album, Escape. Eagle Rock Entertainment was there for the band’s triumphant return where the band played both the albums Escape and Frontiers in their entirety for the first and only time in the band’s history. If you’re a Journey fan, you’re going to want to get your hands on this one.

Journey was the product of a very different kind of music business model in the 1970’s. In those days record companies were patient and spent time and money to develop a band for success. The band was formed by Neal Schon and Ross Valory. Schon was the front man and singer, but through seven albums success eluded the San Francisco staple band. The band was actually not a rock band but a fusion jazz band based on some of the Latin origins Schon learned while playing for Carlos Santana. The band was so desperate at one point that they took singing lessons to try and have that breakout act. It happened in 1978 when they turned to vocalist Steve Perry, who joined the band for the Escape album, which suddenly produced four top-10 singles. The band was on their way, leaving their jazz stylings for anthem rock and never really looking back.

Over the years there were a lot of changes to the lineup. Health reasons eventually sidelined Perry, and the band had a run of ups and downs before a Youtube video caught the band’s attention. It was a Filipino singer named Arnel Pineda. The young man was doing Journey tribute material, and the guys thought he was a dead ringer for Steve Perry. I was always skeptical, because Perry had such a unique voice, and you recognized Journey immediately when you heard his pipes. If you haven’t yet heard this Pineda kid sing, this is your chance. But don’t close your eyes, or you’re bound to believe you’re listening to Perry.

The concert took place in February of 2017. The band wanted to do something special to celebrate 35 years since the hits finally started coming. They hooked up with their old promoter who volunteered to come out of retirement to book the band in the first place they played when they finally hit the charts. Journey isn’t really going back to their roots. They are returning to the site of their first global triumph. To make the concert even more special, they would play the two albums completely with a couple of encores thrown in for good measure.

The first thing you’ll notice about this concert is the wonderfully sparse stage. There aren’t any of the modern trappings that I believe distract from the music. It’s unfortunate that today’s attention span is so short that a good band can’t even engage their own fans who paid good money to attend long enough to actually…you know…entertain them. Journey made a smart decision here. Trust your fans, and make this all about the music. The only nod to modern concert trappings here are two large screens, but they are both way off to the side of the stage. This is an old-school band showing us that old-school performances still work.

Too often bands today carry names of acts without very much of the original lineup intact. Founding members Neal Schon on lead guitar and Ross Valory are joined by Steve Smith returning after nearly 20 years absent back on drums and Jonathan Cain on keyboards. Neither is a founding member, but both have been members of Journey when the hits started to roll in. They both contributed writing duties to those hits. These four were once the core of the band along with Steve Perry. Most of them are showing their age, but not in their playing ability. Schon appears the most vitalized considering his age. He still has a blast of energy. I have to admit I can’t quite get used to what sounds like Steve Perry’s voice coming out of the young Asian singer. His youth stands out just as much. But let’s be fair here. You watch the concert, and there’s just no doubt that he earned his way on that stage and puts all of his heart and passion into the performance. You get a Blu-ray of the concert and 2 CD’s that contain that also contain the entire show between them.

Send Her My Love

Edge Of The Blade

For fans perhaps the best part of the release is to see all of those LP cuts that were never really done live before. I know I am very appreciative when bands do obscure cuts, but when you’ve had decades of hits, it’s hard to fit them in. It’s concept shows like this that give fans the chance to hear something truly special. This concert fits that bill, and while I have a ton of newfound respect for Pineda, I miss Steve Perry. The concert makes it clear that the final notes from this band have not yet been heard. “Still they ride.”

Gino Sassani is a member of the Southeastern Film Critic's Association (SEFCA). He is a film and television critic based in Tampa, Florida. He's also the Senior Editor here at Upcomingdiscs. Gino started reviewing films in the early 1990's as a segment of his local television show Focus. He's an award-winning recording artist for Omega Records. Gino is currently working on his 8th album Merchants & Mercenaries. Gino took over Upcomingdiscs Dec 1, 2008. He works out of a home theater he calls The Reel World. Favorite films: The Godfather, The Godfather Part II, The Body Snatcher (Val Lewton film with Karloff and Lugosi, not the pod people film), Unforgiven, Gladiator, The Lion King, Jaws, Son Of Frankenstein, The Good, The Bad And The Ugly, and Monsters, Inc.
The Street Fighter Collection (Blu-Ray) Bumblebee (UHD Blu-ray) (4K)