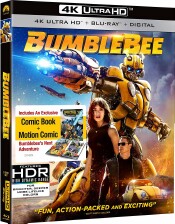 The world of the Transformers is back with more action, adventure, and science fiction fun for everyone. The most-loved Autobot from this world has a history that explains where these troubled characters all began. As the battle of Cybertron comes to a conclusion, the Autobots make their move to flee from the Decepticons to an unknown location to later meet up and regroup. Optimus Prime (Peter Cullen) tells B-127/Bumble Bee (Dylan O’Brien) that he must flee and head to Earth and hide until it is safe to meet up again. Once on Earth, Bumble Bee must find a place to be unnoticed. He must find a secure safe location for his fellow Autobots and defend Earth until Optimus Prime returns. During his landing on Earth, he encounters a team of soldiers training for battle called Sector 7. This team, led by Agent Jack Burns (John Cena), fear for their lives when the capsule transporting B-127 crashes in the forest nearly on top of his team.

In present time Charlie Watson (Hailee Steinfeld), a teenage girl struggling through high school, is trying to find her way. Suffering from the death of her father, she is not transitioning well, while her mother, Sally Watson (Pamela Adlon) and brother, Otis Watson (Jason Drucker), have begun to move on. With the addition of her new stepfather, Ron (Stephen Schneider), Charlie is desperate to find a way out.

When in search of a car to be able to show that she belongs to the in-crowd at school, she stumbles across a yellow Volkswagen bug in a desperate need of attention. This is where these two meet (Charlie and Bumblebee), and the real story begins.

Director Travis Knight establishes the theme of the story very quickly and manages to continue to flow the storyline perfectly. He includes spectacular special effects that make this world come alive and almost compels us all to believe these characters really exist. Along with some great acting, an excellent soundtrack, and lots of action, this film will keep you entertained.

Bumblebee is presented in an aspect ratio of 1.78:1. The original aspect ratio was 1.85:1 The ultra-high-definition 2160p  image is arrived at by an HEVC codec with an impressive average bitrate of 50-55 mbps. This is very much a period film, and that 80’s look actually gets reproduced nicely here. Colors are a little desaturated with the exception of some of the villain Transformers who sport more modern-looking shiny metal features. The push here over color is the texture detail. The rusted and aged features of the VW Beatle are quite a bit heightened in the UHD over the Blu-ray version of the film. The same can be said for all of the intricate Transformer parts. Black levels are fairly solid, with some push toward less shadow definition because of some intentional haze elements. If you’re looking for a more modern shiny image, the opening Cybertron battle is loaded with great color, flashes of explosions, and is totally computer-generated. The f/x within the film generally match pretty flawlessly with the exception of a couple of Charlie’s direct interactions. The seams are more visible here than in the Blu-ray HD version.

The Atmos track defaults to a pretty nice 7.1 mix. One thing you can expect from a Transformers film is a busy and immersive audio presentation. While this film is certainly more reserved and intimate than the other films in the franchise, it has plenty of those moments you expect. The sound of the transformation itself has become quite familiar, and it spreads across the sound design here. The subs kick into overdrive for the requisite explosions, and the opening Cybertron battle is so filled with ear candy that you will absolutely feel surrounded if you have your system tuned correctly. This is a good test. If you’re not getting what I’m telling you this film has, you need to think about a calibration of your system. Dialog comes through, as does the nice nostalgic 80’s rock music that adds that final piece of atmosphere for this 80’s period piece.

Sector 7 Archive: (9:19) This is an animated comic that fills in some of the missing storyline. It has an optional intro that plays out like a Sector 7 recruitment video.

Deleted And Extended Scenes: (19:05) There are nine with a play-all option. The f/x are in various stages of completion.

Bee Vission – The Transformer Robots Of Cybertron: (3:56) This feature uses the opening battle scene to provide identification and information on some of the robots you see there.

Bringing Bumblebee To The Big Screen: This is a 5-part behind-the-scenes feature with no play-all option. The first two deal with characters, chemistry, and relationships, while the next two look at Bumblebee himself and compare to the 80’s cartoons. The final piece is the real behind-the-scenes feature that takes us to the production itself with all of the usual cast and crew interviews.

Developing this in-depth detailed remarkable origin story, this hands-down has become the best chapter of all the Transformers films. It includes a well-balanced adventure that is sure to entertain, especially those teenagers who never seem to like anything.

John Delia has been on all sides of the movie business from publicity, writing for publications and on line blogs, script writing, to film making. Writer, critic, film editor he has worked as a film critic on this second go around for 14 years. He earned his Bachelor’s degree at the college of Journalism and Communications at the University of Florida in Gainesville, Florida. John is an active member of the Southeastern Film Critics Association (SEFCA) . Favorite Films: Lord of the Rings/Hobbit trilogies, The Godfather trilogy, the Indiana Jones trilogy (I didn't like the 4th), The Avengers and for TV it's Game of Thrones. As for animation it's a tie between anything Pixar and everything Hayao Miyazaki.
Journey Live In Japan 2017 – Escape/Frontiers The Mule (UHD Blu-ray (4K)