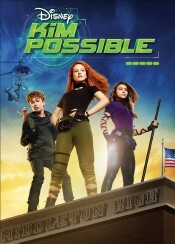 It is uncanny; I swear any time anyone mentions Kim Possible, I instantly start to hear the theme song in my hand. It’s like as soon as her name is mention, all I hear is, “Call me, Beep me, if you wanna reach me.” It’s been well over a decade since I’ve seen an episode, but that theme song is just as catchy now as it was back then. Kim Possible was from an era on the Disney Channel that produced some of the best original television content and movies in my humble opinion. An animated cartoon about a high school student who is also a secret agent, who didn’t want to be that back then. So I was extremely excited to be able to share the live-action movie version with my daughter, but the sad reality is that the live action version is a cheesy and generic shadow of the series that I was so fond of during my childhood.

Kim Possible (Sadie Stanley) is starting high school. For everyone, this is a nerve-racking time in their life. However, Kim is used to having to diffuse world-disintegrating slime and rescuing captured scientists, all while making sure she is home in time for dinner. So she is sure high school will be a snap. With her best friend and partner Ron Stoppable (Sean Giambrone), she is confident that there is no problem that she can’t handle.

That is until she learns that there is no cheerleading squad, all her classes are located on the opposite sides of the school from one another, and there is new girl at the school who may be more capable of saving the world than she is. For this girl who has always been able to handle anything, the most difficult lesson will be the reality that she may not be able to handle everything.

I will admit to a certain level of biases, but that aside, this was not a well developed or thought out adaptation. This goes for my daughter as well, as she derived more enjoyment from my outrage regarding the movie than actually watching the movie. Early on it became clear that the film was going to rely more on nostalgia of the name rather than a fleshed out and creative storyline. One of the hardest things to watch was the acting. Given the target audience, I wasn’t expecting Oscar-worthy performance, but at least an organic delivery of the lines. Even the established catchphrases, such as “What’s the sitch,” appeared alien. Not to mention the lackluster performance of Ron Stoppable. Yes, Ron was always a sidekick, but he also provided much-needed comic relief to the storyline. Here he is annoying, jittery, and incompetent. Will Friedle should be highly offended.

Again, I recognize that this was not intended to be a blockbuster performance. I was even willing to accept a certain level of corniness for the sake of amusement, along with low-budget production value, but the sad reality is Disney used to accomplish a lot more with a lot less. In this day and age, I expected to see better choreographed fight sequences and special effects.

There was promise with the storyline; Kim struggles to balance her duties as a secret agent as she enters high school. That was an interesting idea, because as we all know high school is a disaster when you aren’t leading a double life. The premise of showing Kim, who is used to excelling at everything she does, for the first time in her life dealing with adversity, was a great idea. This was probably the only truly interesting aspect of the movie. However, the subpar performances of the cast kept it from truly resonating with me. My daughter actually was in and out of the movie at this point, as she felt no connection to the material.

Needless to say, this adaptation of my beloved childhood television show did not get the Nalyce stamp of approval. And it most definitely did not get the Jeremy stamp of approval. According to my daughter, she is boycotting all Disney Channel movies until Descendants 3. When it comes to me, I don’t see a sequel in the future for this Disney product, and that may ultimately be a good thing. However, I would not be opposed to the network running old episodes to see how well it plays with a new audience. Or maybe even bringing back the old series with the original voice cast; I pretty sure most of them are available.

Jeremy Butler is a film school graduate of the International Academy of Design and Technology. He is been writing for Upcomingdiscs since 2012; however, movies have played a big part of his life for much longer. Favorite genres include horror, science fiction/fantasy, and comedy. Favorite movies are V for Vendetta, Boondocks Saints, Kiss Kiss Bang Bang, and The Godfather.
Glass (UHD Blu-ray) (4K) Master Of Dark Shadows