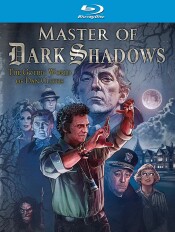 I don’t scare. As a lucid dreamer, I am incapable of having nightmares. That might be one of the reasons I have always been attracted to horror, both in film and television. In my entire life I’ve only been frightened by one film, and that was the final segment of Trilogy Of Terror. There was something about that manic little doll that actually scared me. Of course, I was 10 when I saw it, and hiding behind a chair in our living room because I was supposed to be in bed. For whatever reason, that vivid memory remains. Around the same time I saw the first Night Stalker films, and I wanted to a writer just like Carl Kolchak, and yet another vivid memory remains. Yet a third memory was having our sitter pick me up from school. Often she’d volunteer to buy us ice cream or candy on the way home. I always declined. What would make a little kid refuse free sweets? It was a half-hour soap opera, of all things. Of course, I’m talking about Dark Shadows, and the thing that Dark Shadows, The Night Stalker and Trilogy Of Terror all have in common beyond the vivid memories is that they each came from Dan Curtis. For this once pre-teen kid, Dan Curtis pulled a hat-trick in the late 60’s and early 70’s, and I’ll never forget it.

Of course, not everyone lived at the time Dan Curtis was making his mark. It’s hard to believe that this master of Dark Shadows and other things that went bump in the night started his television career producing a golfing program for CBS Sports for 10 years. There are quite a few things I didn’t know about my personal boogey man. I’ll bet the same is true for all but the most devoted fans. MPI fills in a ton of blanks with Master Of Dark Shadows on DVD and Blu-ray.

As the title suggests, this is a documentary on the man who brought us these television horrors. But it’s really more of a hybrid documentary that focuses as much on the Dark Shadows series as it does on Curtis. For the most part it works out to a tidy little balance. We get a glimpse of the man’s early life, and we’re quickly thrust into the thing that he’s most known for. That’s all well and good. There are plenty of surviving cast and crew to offer up their own memories and stories of both the man and the series. There’s vintage interview material from Barnabas Collins himself, Jonathan Frid, as well as Dan Curtis footage. Unfortunately, both are gone now, and there’s not going to be any new interview footage from either masters. Plenty of the cast and crew do remain, and their input rounds out a thorough look at the series. And that’s both the blessing and the curse of this release. I welcome every bit of what’s there but feel a little cheated by what is not.

The back cover painting features Dark Shadows but also gives us images from Trilogy Of Terror and Kolchak himself holding his iconic silver cross. It lends one to believe these masterpieces will also be covered. They aren’t. Both get a quick passing mention with no footage or additional information provided. The only projects that get good coverage are his The Winds Of War and War & Remembrance. Both are worthy inclusions and deserve the time they are given. It’s also a nice excuse to include horror queen Barbara Steele as part of the documentary. Again, I don’t wish there was less of this, rather at least more than a mention of the other projects that have left an indelible mark on this critic and I dare say many others like me. This 90-minute film could have been longer by 10 or 15 minutes and allowed all that is there to be balanced by a little of the others. It’s a glaring omission that took away a bit of the fun for me.

For the most part the film follows standard documentary formats. You get vintage and more recent interview footage by the participants. Somehow Whoopi Goldberg crashes the party as pretty much the only participant to have had nothing to do with Curtis or any of his shows. Anything for a paycheck, right, Whoopi? The whole affair is narrated wonderfully by Ian McShane, who gives the material the somber gravitas it deserves. There’s plenty of footage from the series and plenty of production stills and other marketing materials from the time. It’s all pretty logically laid out and as informative as it is entertaining.

Extras include an audio clip of Frid on The Dick Cavett Show from 1968, television spots, convention features, and a visit to where the set once stood. Of all of these features, two stand out from the rest. Art Wallace wrote the pilot for Dark Shadows and created much of its atmosphere. He cribbed a bit from his own story The House, which appeared as an episode on the horror anthology series The Web. That episode is included here. The second impressive extra is footage of Frid performing Poe’s The Tell-Tale Heart and a short bit from his Richard III performance. Both date back to the 1968 era. He’s wonderful in both, and it really serves to demonstrate how talented he was, and somewhat sad that he found it hard to break the mold of Barnabas, mostly due to his powerful performance.

The film brought back a ton of memories and made me feel 10 years old again, just for a little while. Those were the days when a kid had few things to worry about. Back to a day when “I used to run home every day from school to see Dark Shadows.”

Gino Sassani is a member of the Southeastern Film Critic's Association (SEFCA). He is a film and television critic based in Tampa, Florida. He's also the Senior Editor here at Upcomingdiscs. Gino started reviewing films in the early 1990's as a segment of his local television show Focus. He's an award-winning recording artist for Omega Records. Gino is currently working on his 8th album Merchants & Mercenaries. Gino took over Upcomingdiscs Dec 1, 2008. He works out of a home theater he calls The Reel World. Favorite films: The Godfather, The Godfather Part II, The Body Snatcher (Val Lewton film with Karloff and Lugosi, not the pod people film), Unforgiven, Gladiator, The Lion King, Jaws, Son Of Frankenstein, The Good, The Bad And The Ugly, and Monsters, Inc.
Kim Possible The Kid Who Would Be King (UHD Blu-ray) (4K)