Posted in: Disc Reviews by Brent Lorentson on April 19th, 2019 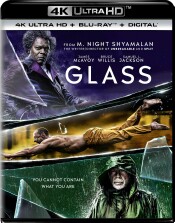 One of 2019’s most anticipated releases is M. Night Shyamalan’s conclusion to his superhero trilogy with Glass. This has been a trilogy 19 years in the making, following the release of Unbreakable and then 2016’s Split. When I first saw Unbreakable, I was a projectionist, and I had to screen it the night before it was released to make sure everything was spliced together and the film played properly, and I just remember not really liking the movie at first.  I ended up giving the film another try, and I found I liked it a little more. Now over the years I’ve seen it several times, and the film has grown on me.  I’ve grown to appreciate the film to the point that when that final scene in Split plays and we got the reveal of David Dunn (Bruce Willis) I was extremely excited at the prospect of seeing this character revisited.  Before I get much further, if you haven’t seen Unbreakable or Split, if you plan on seeing Glass, do yourself a favor and watch the previous films first, and even if you have seen them, it wouldn’t hurt re-watching them just so the films are fresh in your mind while experiencing the conclusion of this trilogy.  With all that out of the way, how was the film?  It’s time to suit up and find out.

As the film opens up, it takes place not long after the events in Split, and we see that Kevin (James McAvoy) is under the control of his 24 personalities, and “The Beast” is responsible for numerous murders.  The media has been following the killer and has been calling him “The Horde”. Also in pursuit of the killer is David, who with the aid of his son, Joseph (Spencer Treat Clark, who played his son in the first film) are fighting crime together, with their home base being a security shop that they run together.  The opening act of this film is great. It flows nicely, and when we get to see David have his showdown with “The Beast”, it’s hard to not get excited for what is to come.  It’s the direction the film goes from here where I can see there being disappointment in what follows from this point up to the end of the film.

We see both David and Kevin are both taken into custody, and instead of being taken to jail they are whisked away to a psychiatric facility where a majority of the film plays out.  Dr. Staple (Sarah Paulson) has the men in her care at the facility, where her specialty is dealing with individuals who believe they are superheroes, and she has a limited time to explain to them they are simply normal everyday human beings.  This is also where we catch up with Elijah/Mr. Glass (Samuel L. Jackson), who is in a catatonic state for a good portion of the film.

While I enjoyed the scene where we see Dr. Staple sitting with her three patients, it’s a sequence that definitely overstays its welcome.  After such a strong start, to see the film simply move to characters sitting down and talking about comics and their so-called special gifts may be a bit of a letdown for some, but personally I kind of liked how Shyamalan goes a more ground route with his story and lets us get to know these characters rather just throw numerous fight scenes at us.  Also, it’s always good to keep in mind that you are watching a film by Shyamalan and that things may not always be as they seem.

This is definitely a performance piece; McAvoy shines in this film as we get to see him shift from his various personalities. This is one where just watching McAvoy playing in this role is worth the price of admission.  What’s a shame, though, is we never get to see Willis or the Dunn character really shine; Jackson and McAvoy are simply at another level here.  This also brings me to Casey (Anya Taylor-Joy) who is criminally underused here. In her few interactions she has with Kevin and his many personalities we get to see some brief glimpses of this chemistry between the actors, and it left me wanting more.  That’s basically the downfall of this film; it left me wanting so much more than what was given.  This isn’t a Marvel film where there was a 100-million-plus budget to play with, instead this was shot at a meager 20 million, and it seems every dollar was stretched and put onto the screen (though I would love to see the rumored 3-hour rough cut of the film).

By no means is this a bad film, but it never quite reaches its full potential.  Though in saying that, I do feel this is a film that will grow on me more with time. The film does bring up some entertaining ideas that unfortunately never get fleshed out and does leave you wondering just how would the world react if it were revealed that superheroes do exist and are walking among us.

Glass is presented in an aspect ratio of 2.39:1. The ultra-high-definition 2160p  image is arrived at by an HEVC codec with an impressive average bitrate of 70+ mbps. The impressive bitrate peaks well over 100 mbps. The film was shot at 3.4K so that this is pretty close to a native 4K movie, and it shows. The sharpness is rather stunning. Details are illuminating with these three characters, and close-ups are used a bit to tell this story. It’s a nice reproduction of genuine masterful cinematography. Colors don’t often dominate, so that it’s the sharp lines of contrast where the HDR is able to truly shine here. Textures complete the atmospheric style of the film that manages to draw a pretty nice line between the comic films we’ve seen and the raw natural world we actually live in. Black levels are superb and deliver wonderful shadow definition.

The Atmos track defaults to a very solid 7.1 mix. You won’t find this to be a particularly aggressive surround mix. The real subtle work here is in the dialog and interaction between the characters. There’s enough of a hint of sub there to bring out the depth of the exchanges. Even when the action ramps up, the film is going more for a “found footage/documentary” look, so you aren’t going to be shaking the room with this one. Placement is the skill that is used most effectively here. The immersion comes from the flawless placement of sound rather than overwhelming the senses. That’s not to say there aren’t some powerful sub moments. The film uses them sharply in well-defined moments to accent a punch or a takedown. The score also can go from thrilling to merely haunting.

The extras are on both the 4K and Blu-ray copies of the film.

Alternate Opening with Director Introduction: Basically this takes the film immediately to Raven Hill Manor, where we see people setting up for their future inmates.

Deleted Scenes: (24:53)  There are a total of 12 deleted scenes. Each has an introduction from the director, so it’s not really 24 minutes of extra footage; really it comes down to about half that.

The Collection of Main Characters: (8:43) This is broken up into four parts, but there is a Play-All feature here. Basically this is a brief discussion about each of the characters and their roles in the film.

A Conversation With James McAvoy and M. Night Shyamalan: (5:10) A fun little discussion between the actor and director discussing the film and Kevin Wendell Crumb.

Bringing the Team Back Together: (2:59) Rather than focus on the cast, this is a nice little look at the crew M. Night has worked with over the years and how they have worked on many of his films over the course of his career.

David Dunn VS The Beast: (2:11) A brief BTS look at what went into the epic fight at the end of the film.

Glass Decoded: (2:52) An interesting look at how color palettes factor into the universe M. Night has created and how it has evolved from Unbreakable to Split, then finally Glass.

Breaking Glass: The Stunts: (1:28) A very brief look at the stunt work that went into the film.

Connecting The Glass Universe: (2:54) A discussion about how the individual movies were written to tell one larger story.

Night Shyamalan: Behind the Lens: (2:46) Mostly this is about how M. Night goes about making his films. This really could have been a great feature if they dove a little more into this process and allowed us to see him doing more on set and over the course of pre-production to the final edit.

The Sound of Glass: (1:50) An interview with the composer about how he was able to create the unique sound of the music for the film.

Enhancing the Spectacle: (2:53) Though this isn’t filled with CGI like we’ve come to expect in most superhero films, this feature shows there is more CGI involved in this film than you’d expect.  This made me a little more impressed with the final product, seeing the subtle additions to bring this world and characters to life.

Raven Hill Memorial (2:16) The cast and crew discuss the unique location where the film takes place.

Getting to watch this film a second time around, I feel I got to appreciate more, but I just don’t feel it holds up to the previous two films.  Please don’t try to watch this without seeing the previous films first; this is still a trilogy that is worthy of being watched from start to finish.  It may not have the grandiose feel we’ve come to expect from the superhero blockbusters, but Glass reminds us that what truly matters are the characters involved in the story.  I’m glad to see M. Night has managed to bounce back with his career, and I’m looking forward to see what he has in store for us next.

Brent Lorentson is a horror writer and film critic based out of Tampa, Florida. With a BA in Digital Film, he co-wrote and co-directed Scavenger Hunt. His short stories have appeared in various horror anthologies. In 2019 his short script Fertile Blood will be a part of the anthology horror film Slumber Party. He is currently working on his first novel A Dark and Secret Place set to be released in late 2019. Favorite Films: Taxi Driver, Fight Club, I Saw the Devil, The Wild Bunch, Dawn of the Dead, A Clockwork Orange, Pulp Fiction, Heathers, The Monster Squad, and High Fidelity.
Escape at Dannemora Kim Possible