Posted in: Disc Reviews by Brent Lorentson on April 26th, 2019 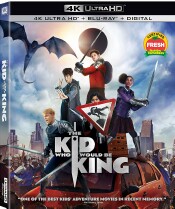 Just imagine for a moment that a 12-year-old version of yourself was taking a little stroll and you came across a sword that was protruding from a slab of concrete. We’ve seen plenty of versions of the King Arthur story. Some have been good (Excalibur and First Knight) but many have been not so good. In the case of The Kid Who Would Be King, it’s not a story about King Arthur but more an adventure that asks what would happen if a boy were to find the sword in today’s world.  The film didn’t do so well at the box office, which isn’t a big surprise considering the film was made in the UK and not the States, but is the film one to be overlooked and forgotten, or is this a gem worth checking out?  Simply put, this is perhaps the best “kids’” film I’ve seen in years, and this is a film that I’m willing to bet will garner a cult status in the years to come.

From the moment I saw the trailer for this I thought it looked like fun, but when I saw that it was written and directed by Joe Cornish, this film worked its way onto my must-see list.  For those who may be unfamiliar with the name, Joe Cornish is responsible for the film Attack the Block (2011).  For those that haven’t seen Attack the Block, please remedy this immediately. For a quick summary, it was a film about a group of kids who end up having to fight a group of aliens that have landed and are attempting to take over the neighborhood.  The film is a fast-paced comedic blast that was responsible for kicking off the career for John Boyega, who went on to play the character Finn in a little franchise called Star Wars. So, it’s been a few years since Attack the Block has been out, and for me it was hard to keep my expectations in check, but Cornish managed to deliver another fun popcorn flick.

Cornish has a gift when it comes to working with children, and when it comes to The Kid Who Would Be King, he manages to bring out the kind of performances and whimsy that you would expect from Spielberg back in the 80’s.  Louis Ashbourne Serkis (yes, the son of Andy Serkis) leads the cast as Alex, who happens to stumble upon the sword following a confrontation with a pair of school bullies.  Alex is a fan of the Arthur legends and believes that after removing the sword that he is in some way distantly related to Arthur.  He wastes little time to tell his best friend, Bedders (Dean Chaumoo) about his discovery.  Having possession of the sword comes at a cost, as it has awoken the demon sorceress Morgana (Rebecca Ferguson), who wishes to destroy the world.

Had the film simply focused on Alex having to fight the evil Morgana, the film still would have been entertaining, but Cornish managed to squeeze in the sub-plot of Alex attempting to find his father to inject some heart into this tale, and it works.  Joining Alex on his quest are the bullies from his school, Lance (Tom Taylor) and Kaye (Rhianna Dorris).  But the real connective tissue of this group is Merlin, whom we see in two forms. There is young Merlin (Angus Imrie) and then the adult Merlin (Patrick Stewart). Patrick Stewart seems to be having a blast in this role, but it’s Angus Imrie who manages to be the scene thief in this film as we see him training the young students and preparing them for their eventual battle against Morgana.

The cinematography from Bill Pope (The Matrix and Baby Driver) is another element that elevates this film, though I have to admit there are a couple moments where some of the CGI effects didn’t blend so well with the physical action. A particular horse chase comes to mind with this.

If you’re expecting a gritty and faithful adaption of the legend of King Arthur, then you’re going to walk away disappointed.  Sure, we get several references to the Arthur legend. The Lady in the Lake sequence is one of my favorite moments visually in the film. Instead I see this film as a throwback to the adventure films of the 80’s like The Goonies, ET, or Monster Squad…Maybe not quite on par with these legends of the 80’s, but definitely films that are playing in the same creative sandbox and sharing the same cinematic heart.

Where the film completely won me over comes in the final act where we see Alex and his knights along with Merlin training the entire school to prepare for battle in a showdown that will be taking place at their school.  At this point you’ve either shut your brain off and simply allowed yourself to have fun with this film, or you’ve already lost interest (which would be a shame, but you can’t please everyone).  The film isn’t perfect, but it’s certainly a lot of fun, and for a PG kids’ film, that is all you can ask for. You don’t go into this film looking for groundbreaking cinema. This is a film you go into to escape the real world and hopefully remember what it was like to be a kid and just have fun in a dark room in front of a large screen for a couple of hours.

The Kid Who Would Be King is presented in an aspect ratio of 2.39:1. The ultra-high-definition 2160p  image is arrived at by an HEVC codec with an average bitrate of 50 mbps. There’s a lot of nice texture elements to be found here. Some of the CG is a little more obvious in 4K, but that doesn’t take away from the improved color saturation or fine texture elements of the film. The costumes benefit greatly from this enhanced texture element. HDR not only helps to bring out the colors but provides wonderful contrast between bright objects against often darkly presented environments. The original material is 2K, so it’s an upconvert that takes you ever so slightly over the HD presentation, but the difference is like cleaning a pair of dirty glasses. Reds and blues pop, particularly in the costumes, to liven up a sometimes dreary landscape.

The Atmos track defaults to a pretty solid 7.1 mix. The mix is as impressive with sound placement as it is with reproducing sound environments. The Morgana reverb effects truly immerse you in that world and allow dialog to tell the story not merely by the words themselves but by the way dialog interacts with these environments. It’s a surprisingly immersive experience that was well-crafted by the audio design folks. I didn’t see it theatrically, but I get an almost theatrical feel from this audio presentation. The score has some rather odd moments that again enhance the fantastical atmosphere found throughout the film. Color temperatures are used cleverly to distinguish fantasy realms from the real world, which is much warmer in tone than the rather cool temperatures of some of the more fantastic places.

Deleted Scenes: (4:03) Just a handful of scenes that have been edited together. The one that stood out the most involves the young Merlin seeing how the legend has been watered down to simply a way of selling toys and profiting off the story.

Origins of a King: (11:48) Filled with BTS footage, this feature discusses how Joe Cornish was influenced by the King Arthur tales and where he got the idea for the movie.

Young Knights: (12:07) This gets into the casting and the process the kids went through to get the roles in the film.

Knight School: (10:03) Another fun feature where we get to see the training the kids went through for the film.

The Two Merlins: (11:48) This is about the actors and their approach to the characters.

Meet Morgana: (12:02) All about the movie’s big bad demon sorceress and effects for the character.

Movie Magic: (13:33) A fun behind-the-scenes look at the practical effects in the film as well as the digital effects that were done.

Hair, Make-up, and Costume Tests: (2:58) A little montage from the pre-production stage of the cast in different outfits we see them in over the course of the film.

Promotional Material: Here we have a collection of promo spots for the film.  Four of them are of the young Merlin performing a variety of magic tricks.

Music Video: “Be the King” by Lay Lay.

This is one of those films where it is a shame it was overlooked at the box office, but hopefully it will find an audience now that it is on Blu-ray and streaming.  In the states it seems the story of King Arthur isn’t much of a draw, but hopefully word of mouth for the film will give this the audience it deserves.  This is one that kids and the whole family can enjoy together, and there really haven’t been many of those lately (at least that have been any good) that haven’t been sequels or comic book films.

Brent Lorentson is a horror writer and film critic based out of Tampa, Florida. With a BA in Digital Film, he co-wrote and co-directed Scavenger Hunt. His short stories have appeared in various horror anthologies. In 2019 his short script Fertile Blood will be a part of the anthology horror film Slumber Party. He is currently working on his first novel A Dark and Secret Place set to be released in late 2019. Favorite Films: Taxi Driver, Fight Club, I Saw the Devil, The Wild Bunch, Dawn of the Dead, A Clockwork Orange, Pulp Fiction, Heathers, The Monster Squad, and High Fidelity.
Master Of Dark Shadows Avengers: Endgame