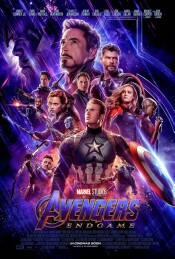 “It’s going to be a tearjerker.”

It all started with Iron Man in 2008. Marvel Studios put together the most ambitious film saga in the history of the medium. 22 films that served as introduction to comic book heroes and the various story threads that would ultimately bind them together into one epic tale. All along the way it was important that each film stand on its own legs and provide enough story and action to satisfy the film audiences at each signpost along the way. 22 films over 11 years, and it all finally comes to its inevitable conclusion in The Avengers: Endgame. From this film forward, it’s going to be a very different landscape for the Marvel Cinematic Universe. New heroes are on the way, and some will either no longer be there or will take on an entirely different form and persona. I’m not about to tell you where these changes come down. That would ultimately ruin this 3-hour ride you are about to embark upon. But when it ends, you will completely understand that it was all leading to this point, and it will be a sad but satisfying conclusion. But before we talk about endings, let’s enjoy that final ride into the end.

I’m not going to delve into many plot points. First of all, it would take up far more space here than I have to tell it. This film picks up threads that were almost forgotten until you see them become part of the story again. And that’s the most engaging part of this movie. This isn’t simply about finding a way to reverse the damage done by Thanos (Broslin). In the comic book fantasy world of superheroes, that would almost be too easy and take very little time to accomplish. Endgame dares to take you on an emotional ride to tie up literally dozens of threads laid down from the film series going all the way back to 2008. That also means a list of guest stars from those movies that comprise one hell of an impressive effort to bring in huge names for literally seconds of screen time. But I promise you there will be wonderful surprises here, and I challenge you to avoid even looking at the IMDb cast list, or it will destroy some of these surprise appearances. Look, it’s not going to surprise anyone that the team manages to find a way out of the tragic ending in the previous film. The mere fact that there’s a new Spider-Man film coming in July pretty much announces as much. You always knew they were going to find a way back. In the comics themselves, characters die and return with such frequency that death has little meaning in these kinds of films. What isn’t common to the genre is that “fixing” things can come at great cost and sacrifice. You’re going to walk away with the feeling you’ve been rewarded for 11 years of faithfulness to these films and their many stories. You’re going to be rewarded for paying attention to the details.

You will get the sense that these characters understand where they are at in the story. It all started with Robert Downey, Jr, Chris Hemsworth, and Chris Evans, for the most part. They took heroes that were merely 4-color icons and imbued them with depth and personality. They inhabited these characters as if they were born to play them, and now it’s all culminated in a climax 11 years in the making. These characters have changed so much from when we first met each of them. This isn’t one of Marvel’s most lighthearted attempts. There’s a darkness that allows for less of the MCU’s usual wisecracks and more self-awareness of who they are, and while Uncle Ben’s not there to say it, we all can hear it in our own minds: with great power comes great responsibility, and these characters are at the point where it’s time to live up to that slogan completely. It all happens without the DC need for brooding and angst. These are characters who now accept the darkness without allowing it to destroy who they really are, and as one “world” comes to its conclusion there is so much hope for the stories Marvel has yet to tell. One door closes, and millions more open. You’ll celebrate the maturity of these characters even while you’ll miss some of the lightness that is more rare in this film than any of the 22.

In many ways this is both the most fantastical of plots and in just as many ways one of the most realistic. Marvel grounds this film in such a way that the MCU isn’t the only thing that is changed. You will be changed as well, and trust me when I tell you that you won’t look at any of these films again the same way. It’s inspired me to find the time to watch this 22-film arc again with the knowledge Endgame offers me, and I suspect it will be like watching them all for the first time all over again. That’s a powerful… and quite profitable legacy to be left behind by such a capstone film. I am eager to rediscover these hopeful heroes with the knowledge of where it’s all going and who they ultimately become.

Of course, all of the big names are here. Not all get the kind of screen time you were hoping for. Some of them get very little time on the screen, but every one of them manages to find their shining moment. They all make some kind of an impact. When it’s all over you’ll find that some of these heroes have finally lived up to that word, and not with powers or abilities, but with a touch of humanity that has separated Marvel from DC since the 1960’s. Stan would have been proud. He would have been proud because the film does more than I ever expected it to do. It’s a love letter to both creators like Stan and us, the fans. The Russo Brothers have made a mark on this material, and they will be a hard act to follow. Will the next decade of films tell this good a story? With the addition of The Fantastic Four and The X-Men finally in the MCU where they belong, the future is still an open canvas, and this is the film that will allow you to move on to that next grand story even as it creates a tough act to follow.

There’s another reward coming your way here. This is likely the first film out of 22 that doesn’t have you focused on the next chapter. There aren’t any stingers to set up the next stage. Stay for the credits, as there is something of an audio stinger, but you have to wait until the last of a long credit roll to hear it. Is it worth it? Probably not. But you’ve come along for the ride this far. What’s another 1o minutes? This is a complicated film that requires your complete attention at all times. Some have complained about the running time, but honestly, I can’t imagine where they could have cut anything out. In fact, I suspect there were huge compromises just to get it to three hours. Any missing pieces and it all would have come crumbling down. It looks back, not forward. They’re not really trying to sell you on the next film. That has always been a part of these films that left me the most uncomfortable. Sometimes it just feels like the film you’re watching is just a setup for what’s next a two-hour trailer. I always felt that way about The Empire Strikes Back, while most fans find it the best film of that trilogy. None of this is driven by anticipation. It’s all payoff, and I really found that quite refreshing. There’s a somberness to it all but it won’t bring you down. It’s the difference between a funeral and a celebration of life. And there’s even food at theater-chain-inflated prices, of course, but load up. It’s going to be a long ride, and you’re not going to want to step away for a second. And like life itself, “Part of the journey is the end.”

Gino Sassani is a member of the Southeastern Film Critic's Association (SEFCA). He is a film and television critic based in Tampa, Florida. He's also the Senior Editor here at Upcomingdiscs. Gino started reviewing films in the early 1990's as a segment of his local television show Focus. He's an award-winning recording artist for Omega Records. Gino is currently working on his 8th album Merchants & Mercenaries. Gino took over Upcomingdiscs Dec 1, 2008. He works out of a home theater he calls The Reel World. Favorite films: The Godfather, The Godfather Part II, The Body Snatcher (Val Lewton film with Karloff and Lugosi, not the pod people film), Unforgiven, Gladiator, The Lion King, Jaws, Son Of Frankenstein, The Good, The Bad And The Ugly, and Monsters, Inc.
The Kid Who Would Be King (UHD Blu-ray) (4K) Destroyer (Blu-ray)