Posted in: Disc Reviews by Brent Lorentson on May 1st, 2019 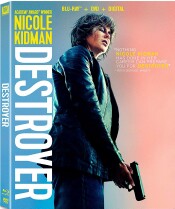 If I’m being honest, I never would have guessed that Nicole Kidman could ever pull off playing a dirty undercover cop.  I’m not saying she’s a bad actress; I just never thought the day would come that she would play such a lowdown gritty role, and I’m so glad she did. How Kidman wasn’t showered with awards this past year for her performance in Destroyer is beyond me. This isn’t just a good performance, but what we get in this film is a woman who transforms herself into a role so different from what she’s done in the past that I respect the chance she took with this role, and the result is mesmerizing even if the film suffers from some pacing issues.

The film opens up with Detective Erin Bell (Kidman) being called out to a crime scene. It doesn’t take long before she realizes that she knows the victim.  This takes us back 17 years prior to when she is being assigned a case that will have her going undercover with Chris (Sebastian Stan) to take down a gang of thieves.  What’s nice is getting to see Kidman and Stan together onscreen. Whether it’s their chemistry or just good acting, these two make it difficult to not be sucked into their story.  While they are infiltrating the gang, we see a real relationship develop between Chris and Erin that actually seems natural and not forced.

Jumping ahead 17 years later we see that time hasn’t been kind to Erin.  She’s a full-blown alcoholic who’s had a failed marriage and a daughter who wants nothing to do with her.  You can almost sympathize with the character, but it’s obvious that she’s the one responsible for her bad decisions. So when she sees the connection to the body from the previous crime scene that connects to her case in the past that went horribly wrong, she sees this as her opportunity to atone.

The pacing of this film can be a bit tedious at first, but as the film gains momentum it manages to suck you right in.  One of the film’s standout scenes is a bank heist that Erin manages to stumble across while following one of her suspects.  Director Karyn Kusama manages to pull off one of the most intense bank robbery sequences since Michael Mann’s Heat, and that is no small feat to achieve. Unfortunately, though, while the rest of the film is good, it just doesn’t maintain the tension of that sequence when this film should have been a nail-biter to the very end. The problem is with the two timelines occurring over the course of the film it feels as though we are watching two separate films that are attempting to achieve two separate things.  This doesn’t make it a bad movie; in fact I really like this film, but I feel this could have been better if perhaps the film stuck with one timeline.

With a supporting cast like Sebastian Stan, Scoot McNairy, and Bradley Whitford, there are plenty of moments where we get to see some really good performances, but Kidman is clearly the star here as she chews through these scenes with a menace and rage like we’ve never seen from her before.

Destroyer is presented in the aspect ratio 2.40:1.  The 1080p image is arrived at with an AVC MPEG-4 codec at an average of 35 mbps.  Since the film has two separate timelines, we are given two separate looks over the course of the film.  When we are with Bell while she is undercover the film has a warmer look; the colors are muted, and at times the image seems even blown out.  When the film cuts to the older Bell, more color seems to pop.  What’s impressive is that though it’s obvious makeup has been used to age and give Kidman a more rundown look, it still looks natural.  While this may not be the most robust and colorful film out there, the warmth of Los Angeles manages to come through nicely.  The night shots look good as well and appear to be done naturally, which is impressive in this digital age.

The DTS HD-Master Audio 5.1 track is a bit of a frustrating one. When it comes to the gunfights, the score, ambient sounds, everything manages to be properly balanced, my issue is with the dialog. The problem is, everyone in this film seems to speak in a monotone voice at a volume that is difficult to understand at times, and adjusting the volume will make everything else sound too loud.  What I do love is how well the score by Theodore Shapiro manages to come through and carry the film forward.

Breakdown of an Anti-Hero: The Making of Destroyer: (19:06) This covers everything from the origin of the story to the casting and filming of the movie. My favorite bit here shows what went into Kidman’s makeup for the role.

While this is a really good film, I feel the pacing is what is going to turn many audiences off to it.  For those that like tough and gritty crime films like Dark Blue, this may be up your alley.  There are some great moments, but most of those are because of the performance Kidman gives, and really that is reason enough to check this film out.  While it’s no Serpico or Heat, this is still a good film that got lost in the shuffle of the awards season.

Brent Lorentson is a horror writer and film critic based out of Tampa, Florida. With a BA in Digital Film, he co-wrote and co-directed Scavenger Hunt. His short stories have appeared in various horror anthologies. In 2019 his short script Fertile Blood will be a part of the anthology horror film Slumber Party. He is currently working on his first novel A Dark and Secret Place set to be released in late 2019. Favorite Films: Taxi Driver, Fight Club, I Saw the Devil, The Wild Bunch, Dawn of the Dead, A Clockwork Orange, Pulp Fiction, Heathers, The Monster Squad, and High Fidelity.
Avengers: Endgame Alien: 40th Anniversary Edition (UHD Blu-ray) (4K)