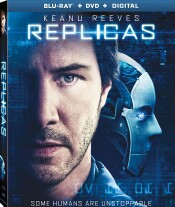 “I didn’t violate every natural law to lose you again.”

If that is not a declaration of love, I don’t know what is. It is also quite possibly Keanu’s only true display of feeling in this movie. Replicas showcases Reeves as a scientist who basically plays God following a tragic accident that claims the life of his wife and children. As I mention earlier, given the emotional elements that occur in the film, I expected there to be a larger range of emotions, such as profound loss and desperation, but I never quite saw these outpours of emotion from his character, who approached everything quite clinically. Will Foster is a pioneer in neurochemistry who is attempting to transfer human consciousness to synthetic body, which would essentially allow human beings to outlive their human host. After several failed attempts, his boss, Jones (John Ortiz) tells him that the project is on the verge of being shut down.

Positive that he is close to a breakthrough, Will’s family is killed in a car accident while en route for a family vacation. While holding his family’s lifeless bodies, he realizes that he can remake them, not just as synthetic hosts, but with cloned bodies. Recruiting a fellow scientist, he sets about resurrecting what he lost.

Will must deal with a number of challenges while attempting to bring back his loved ones including a true “Sophie’s Choice” situation while attempting to solve a problem of getting the replicas to achieve “watershed consciousness” in a matter of days or risk his family tearing themselves apart like his other experiments, a problem that he has not been able to solve with years to research. All while trying to hide everything from his employer who would attempt to profit from his breakthrough.

So as previously mentioned, I expected to see more desperation and profound loss after the death of the family. Keanu makes some attempts at this, but none of them appear to be organic. I just don’t feel like that ability is in his wheelhouse. I have no problem believing that he is capable of killing three in a bar with a pencil, but here it just wasn’t believable. Though the lack of feeling in the beginning can be written off as initial shock and the analytical nature of the character, it doesn’t grant a complete pass in my opinion.

On the other hand, Alice Eve is winning in her role, specifically as she portrayed a slightly off version of her initial character. This ability was essential, as it gave an air of “it’s her but it’s not fully her”. Something else I would have like to have seen is more debate regarding the idea of simply recreating his family, a bit more of an internal struggle with the idea as well as more resistance on the part of his co-conspirator. Perhaps something more like earlier on in the film where Alice suggests the reason Keanu’s experiments are failing is because he is discounting the importance of a soul. That would have been a great philosophical argument to raise during the creation aspect.

It was difficult to follow the terminology of the film given my lack of knowledge in the realm of neurochemistry. As the story goes on, explanations become more fluid and understandable, which allowed me to achieve some ability to relate to the subject matter. However, in the beginning of the film you somewhat require an advanced degree just to grasp what’s going on in the lab.V

Though an intriguing premise, the delivery is a bit spotty due to hit-or-miss performances and the overly technical nature of the film. The film did raise some philosophical questions for me, in regards to what makes us human, though not completely explored to my liking. It was good that it was able to raise the question.

Jeremy Butler is a film school graduate of the International Academy of Design and Technology. He is been writing for Upcomingdiscs since 2012; however, movies have played a big part of his life for much longer. Favorite genres include horror, science fiction/fantasy, and comedy. Favorite movies are V for Vendetta, Boondocks Saints, Kiss Kiss Bang Bang, and The Godfather.
Alien: 40th Anniversary Edition (UHD Blu-ray) (4K) Justice League vs.The Fatal Five (UHD Blu-ray) (4K)