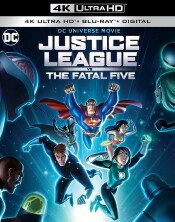 If it wasn’t clear enough before, I think the Avengers: Endgame box office mauling put the final point on the situation between Marvel and DC. When it comes to Cinematic Universes, DC has had an impossible task of keeping up. Avengers took in more on the first weekend than Aquaman did its entire run. The box office round goes to Marvel, and it appears DC has started to come to grips with that fact and has started to transform their own films away from the team-up/combined universe and is going back to basics. Where DC has built a rather strong shared universe for their characters is in the animated feature department. In the last handful of years DC has released some very strong animated films, and that’s where there appears to be a place where they not only compete with Marvel but leave them in the dust. The latest proof of that idea comes with the Warner Brothers release of Justice League vs. The Fatal Five out on UHD Blu-ray in 4K. It’s a solid film with plenty of cheerful action and adventure that always got bogged down in the films with the notable exception of Wonder Woman.

The film begins a thousand years in the future and the League of Superheroes. Their HQ is invaded by three members of their chief nemesis, the Fatal Five. In an attempt to stop them from stealing their time machine the heroes attempt to trap them inside a frozen time bubble, but can’t set the trap in time. The three bad guys: Mano (Rodriquez), The Persuader (King) and Thorack (Jessup) manage to steal the time machine and return to our present day with Starboy (Gabel) silently on their trail.

On Earth the Justice League is dealing with some fresh blood. Miss Martian (Bobadilla) is trying too hard to prove herself to the team so that they will accept her as a member. Her biggest problem is a lack of self-confidence. The same is true for Jessica Cruz (Guerrero), who has been selected as this region’s Green Lantern while John Stewart is away fighting another battle with the Green Lantern Corp. She’s suffering from survivor’s guilt because she was the only person to escape a group of killers encountered on a camping trip. Her doubts are also getting in her way of living up to her potential. Now life’s going to get harder because she is the reason the Fatal Five have arrived in this time and place. They’re searching for something they call the Limelight, and that’s Jessica. They need her to break out the group’s other two members, Emerald Empress (Montano) and Validus (Timm). Their ultimate plan is to use the Green Lantern’s power to destroy the Sun and keep the future clear of any superheroes. Yeah, it kind of gets rid of all the bad guys here, but let’s not quibble over such trivial concerns.

The film also manages to feature plenty of cameo appearances of some great DC baddies. Starboy is thought to be insane when he’s discovered rather disoriented by Batman (Conroy). He relies on regular drug treatments to keep his mind focused, and he’s overdue on his next injection. He ends up in Arkham with plenty of that institution’s biggest celebrities which include Two-Face (Timm), Poison Ivy, and Harley Quinn, both voiced by Tara Strong. The combination of future and present also gives us appearances of Brainiac 5 (Fisher) and Saturn Girl (Strong). So there’s a lot of nice moments for the extreme DC or comics fans to delight in found in the film.

The story also does a good job of dealing with some issues without going the preachy route. There’s a ton here on self-confidence and how one can tap into that for themselves as both Miss Martian and Jessica Cruz end up overcoming the issue to be there for the team. The film puts on a great deal of diversity without making that the big story. These kinds of things work better like this where there’s no attention drawn to that particular aspect of the team. It’s natural and sends its message strictly by example. I hate when filmmakers start to talk about a character’s race or sexual preferences before they even cast the part or finish the story. That should never be the starting point or the big news. Star Trek never made a big deal or called attention to their multicultural crew. They trusted you to get the point simply from their being there. That’s what this film does. They also touch upon mental illness to an extent with the Starboy character. All of it is organic and makes the point without hitting you over the head.

Justice League vs. The Fatal Five is presented in an aspect ratio of 1.78:1. The ultra-high-definition 2160p  image is arrived at by an HEVC codec with an impressive average bitrate of 70+ mbps. Animated films often leave plenty of chances for the HDR to show off what it can do in this format. This film is no exception. The colors are bright and vivid. The colorful costumes show off all of these primary colors in a way the comics could never have provided. The green inventions of the lantern ring is another example of nice colors and sharply defined boundaries in the artwork. You get wonderfully deep black levels that show off during the scenes that exist in outer space. HDR also delivers wonderful contrast with planets or stars against this deep black canvas.

The DTS-HD Master Audio 5.1 track disappoints only in that it was first advertised to be an Atmos track that would default to 7.1. I’ve come to expect that out of UHD releases, even in animated features. This kind of a film has so much potential for audio that never quite materializes. Dialog is just fine. It cuts through and has a nice full and distinct sound. The subs are a little bit of a disappointment here, and you never get a sense that there is much bottom depth to be found no matter how explosive the action. The score is fine, but nothing reaches out and immerses you into any of the story. I felt more apart from the adventure than a better audio presentation would have provided.

A Sneak Peak At Batman: Hush: (9:18) You get a nice look at the next animated feature in this series. Plenty of clips, and the crew and voice cast offer a ton of insight into what you can expect. You also get some nice perspective from the comic version of the story that is also explored here.

Unity Of Hero: (5:11) The feature looks at the film’s diversity. This is a much better place to talk about the efforts so that the film can remain focused on its own story.

Battling The Invisible Menace: (8:05) This feature explores the mental illness plot points of the film.

There are “Previews” of two other features that released years ago, so these are just features ported from other releases.

You also get two episodes from the television cartoon series The Legion Of Superheroes.

There are stories you can tell in animation that would be far too expensive to attempt in live action or strictly computer-generated images. That means we can get stories that would otherwise be far too impractical to deliver any other way. Like the comics themselves, these stories can be told with unique artistic slants in the images. Each one has a slightly unique look because of the artistic team involved. So I consider this the closest medium to the comics themselves, and I love watching them. This was one of the better efforts in the series, and I look forward to many more to come. Compared to the moody live action films, these projects are brighter, more entertaining beacons of light. But I suppose that “Only in darkness can you see the stars.”

Gino Sassani is a member of the Southeastern Film Critic's Association (SEFCA). He is a film and television critic based in Tampa, Florida. He's also the Senior Editor here at Upcomingdiscs. Gino started reviewing films in the early 1990's as a segment of his local television show Focus. He's an award-winning recording artist for Omega Records. Gino is currently working on his 8th album Merchants & Mercenaries. Gino took over Upcomingdiscs Dec 1, 2008. He works out of a home theater he calls The Reel World. Favorite films: The Godfather, The Godfather Part II, The Body Snatcher (Val Lewton film with Karloff and Lugosi, not the pod people film), Unforgiven, Gladiator, The Lion King, Jaws, Son Of Frankenstein, The Good, The Bad And The Ugly, and Monsters, Inc.
Replicas (Blu-ray) The Hole In The Ground